From the Resolutions of the 53rd Conference of the ANC held in December 2012:

35. Palestine:
a. The ANC re-affirms the resolution of its 52nd National Conference in Polokwane on the on Palestinian question.

b. The ANC supports the application of Palestine for statehood and full membership to the UN and, therefore, supports the UN General Assembly Resolution granting Palestine a nonmember observer state as an important step towards that goal.

c. The ANC is unequivocal in its support for the Palestinian people in their struggle for self-determination, and unapologetic in its view that the Palestinians are the victims and the oppressed in the conflict with Israel.

d. The ANC will continue its solidarity efforts supporting a just solution including the strengthening of a sovereign independent state of Palestine, which will help to bring peace to the region and end conflict between Israelis and Palestinians.

e. The ANC calls on the Israeli government to release all political prisoners, to immediately cease the expansion of settlements in the West Bank and to stop the wanton and consistent attacks on Palestinian people in the Gaza Strip.

f. The ANC calls on all organisations in support of the people of Palestine to form a united solidarity campaign in a view of strengthening the South African solidarity forum.

g. The ANC calls on all South Africans to support the programmes and campaigns of the Palestinian civil society which seek to put pressure on Israel to engage with the Palestinian people to reach a just solution.

h. The ANC calls upon all Palestinian political formations to put aside their differences and continue to work together for unity.

i. In support of the Non-Aligned Movement’s call, the ANC-led government will continue to insist on the labelling of imported goods indicating their areas of origin.

j. The ANC abhors the recent Israeli state-sponsored xenophobic attacks and deportation of people of African origin and request that this matter should be escalated to the AU. 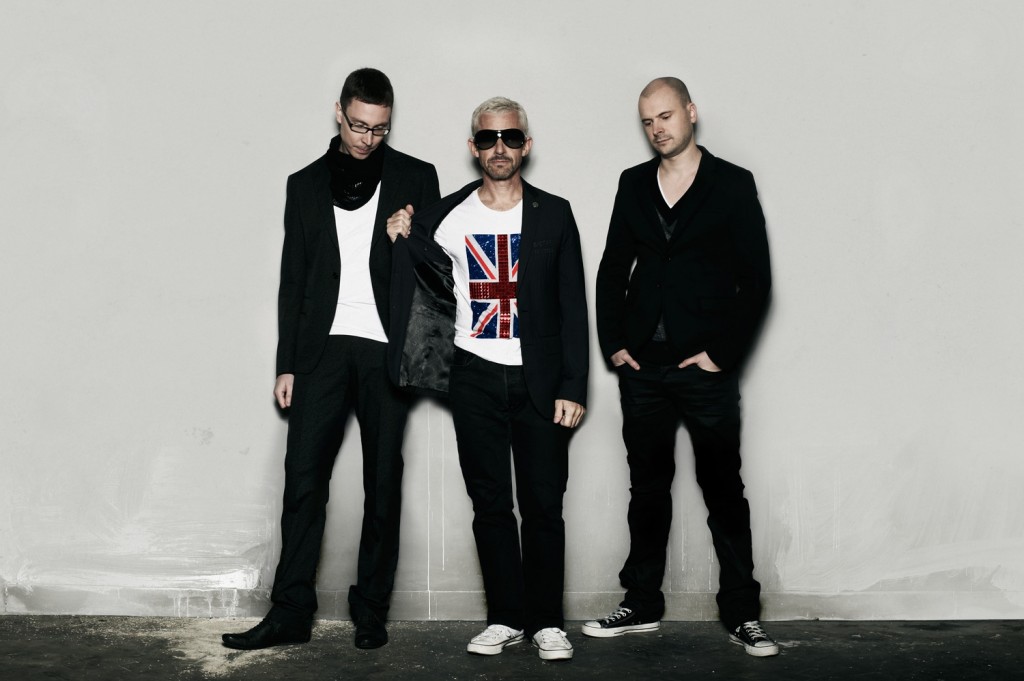 Dear Above and Beyond members Paavo Siljamäki, Jono Grant, and Tony McGuinness,

We are writing to ask you to seriously consider cancelling your gig planned for February 21 in Tel Aviv. Your cancellation would send an effective, truthful message to young people in Israel: Apartheid is unacceptable.

For change to occur, the status quo cannot be supported. One part of the current routine is for trance artists such as yourselves to fly quietly to Tel Aviv, perform for throngs of Israelis and, at times, even for a few Palestinians with Israeli identification cards.

The other part of the present routine is to ignore Israel’s crimes against Palestinians in Gaza and the West Bank. Israel’s medieval siege upon the over 1.6 million people of Gaza is a crime of collective punishment, defying international law, and violating the most basic human rights. Like it or not your audience in Tel Aviv, liberal as they may seem when they are dancing late into the night, largely support that unconscionable siege. Your gigs in Israel only help to reassure them that all is well, that any discomforting awareness can be suppressed in dance and they should continue not to question their state despite its crimes against humanity.

Yet can music really be completely separate from politics? In the case of Israel, it cannot. The act of performing in Israel is interpreted and broadcast as support and propaganda for the state through a willingness to violate the boycott call made in 2005 by Palestinian Civil Society. On the other hand, simply refraining from playing in Israel is a quiet, neutral stand to take. Lastly, speaking out in support of the boycott is a clear stand against apartheid. Roger Waters from Pink Floyd, for example, has taken the latter route, asking his colleagues in the music industry to support the boycott. [1] Portico Quartet also chose to vocally support the boycott, after cancelling their gig planned for this month.[2]

We are asking you to at least take a neutral stand and quietly refrain from playing in Israel. Better yet, we are asking you to appraise the information about the reasons for boycott, and vocally support it. Dave Randall is an example of one of several artists who worked in a collaborative effort to create amazing musical support for Palestine, as well as vocal encouragement for the boycott.[3]

Plans for Lollapalooza Israel were recently scrapped because organizers could not recruit international artists who would agree to perform in Israel, the number of artists willing to play there is dwindling.[4]

Why should trance artists be any different? Trance musicians are also afforded a great opportunity to take a stand for justice. Paavo Siljamäki, Jono Grant, and Tony McGuinness, this is your choice, your opportunity, and now is the time, make your trance music group go way above and beyond, support justice and call out against apartheid, don’t return for a third time to Israel.

Don’t Play Apartheid Israel
We are a group, of over 1000 members, representing many nations around the globe, who believe that it is essential for musicians & other artists to heed the call of the PACBI, and join in the boycott of Israel. This is essential in order to work towards justice for the Palestinian people under occupation, and also in refugee camps and in the diaspora throughout the world.

Trance Addicts Against Israeli Apartheid
We are a newly formed group dedicated to the advocacy and promotion of a trance music boycott of Israel.

[1] Tear down this Israeli wall: I want the music industry to support Palestinians’ rights and oppose this inhumane barrier by Roger Waters
http://www.guardian.co.uk/commentisfree/2011/mar/11/cultural-boycott-west-bank-wall

[4] Party’s over for Perry Farrell: Lollapalooza Israel collapses as artists said to stay away http://electronicintifada.net/blogs/ali-abunimah/partys-over-perry-farrell-lollapalooza-israel-collapses-artists-said-stay-away

Great news of another early 2013 victory for boycott, divestment and sanctions of apartheid Israel! Lollapalooza Israel 2013 has been removed from the official Lollapalooza site and apparently cancelled according to this Ynet report:

‘… plans to hold the American Lollapalooza music festival in Israel in the summer have apparently been cancelled.

Although the Israeli producers denied the report, all Israel-related content has been removed from the festival’s official website.’

“there were many difficulties in recruiting famous artists to take part in the festival..”

Thanks to the courageous bands and musicians who have refused to breach the boycott, following efforts to make them aware of the necessity to respect the Palestinian-led boycott by Lollapartheid Israel: Artists of Conscience, Respect the Boycott and Boycott from Within!

Official news of the cancellation of the Israeli Lollapartheid festival is now awaited. 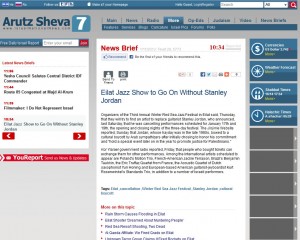 The online news service, Israel National News, has misrepresented the reporting on Jordan’s cancellation from this blog. A link to the story from the INN dizzying spin would have enabled readers to determine the truth of the matter. Is this too much to ask of Israel’s mainstream media?

On the 6th January, following effective advocacy from supporters of the Palestinian-led boycott, divestment and sanctions movement, Stanley Jordan, who was to headline the Red Sea Jazz Festival at Eilat this month announced that he was cancelling his gig, apologising for any inconvenience caused.

With an embarrassing display of gutter journalism, INN implies that this blog reported Stanley Jordan as having had his “hayday [sic] in the 80s” bowing “to a cultural boycott by Arab sympathizers after initially chosing [sic] to honor his commitment and “hold a special event later on in the year to promote justice for Palestinians.””. Is Israel so far up against its apartheid wall that it now selects hasbeens to headline its Festivals?

Jordan is a major jazz fusion performing and recording star, who has played with the likes of Miles Davis, Benny Carter and Dizzy Gillespie, and who has developed a unique two-handed tapping guitar technique. He is also an academic specialising in music therapy. Sometimes the best therapy for dysfunction is to withhold music altogether.

Israel’s opportunistic government unashamedly uses all culture as propaganda – apparently it is not beneath its media propaganderists to misuse cancellations by principled artists after calls to boycott to misquote the messenger and smear the artist as well. Yet perhaps the headline of the INN story betrays how close the Israeli-government sponsored festival was to closing after Jordan’s cancellation.

Eilat Jazz Show to Go On Without Stanley Jordan http://t.co/0Gm77OFv

Artists who still have not committed to cancelling their entertainment of apartheid at the Red Sea Jazz Festival and respecting the boycott are Erik Truffaz, Benjamin Taubkin, Marcelo Pretto, Jacky Terrasson, Yuri Honing, E J Strickland, Wolfert Brederode and the Motion Trio. To help persuade these artists to stand on the right side of history with the oppressed Palestinian people demanding justice, freedom and human rights, information for action is available on the Boycott the Red Sea Jazz Festival facebook page.

Thus far, artists who have cancelled their performances at this year’s Red Sea Festival include the Portico Quartet, Andreas Öberg and Stanley Jordan. Before the 2012 Israeli Government-sponsored Eilat festival, Tuba Skinny decided to refuse to play while in Rome en-route to Israel after receiving information about the cultural boycott, only a few days prior to their scheduled gig. Latin jazz great Eddie Palmieri of Puerto Rico and jazz musician Jason Moran of Houston followed Tuba Skinny, cancelling their appearances at the Festival. None of these artists have rescheduled performances in Israel to date.

Note to INN – this is the Kadaitcha blog, which publishes many different writers and sources, including @Jinjirrie. The story on Stanley Jordan’s cancellation from the Red Sea Jazz Festival was sourced from Don’t Play Apartheid Israel and first published on the Refrain Playing Israel blog.