Any publicity is good publicity, so maybe the faithful will rally to the cause and fill the gap after fallout from the St. Vincent de Paul court loss to ex-volunteer Linda Walsh spreads. Moreover, perhaps they will look askance at a hypocrital organisation which invested a truckload of money and a barrage of lawyers with a shocking, medieval defence against one of its volunteers.

Those of us who thought the shop up the road was all about helping the poor stand corrected. “The primary function of the society,” said St Vincent de Paul’s lawyers, “is to inculcate the Catholic faith in its members.”

From the St Vinnie’s web site:

“Speak up for those who cannot speak for themselves, protect the rights of those who are helpless.

Speak out and pronounce a sentence of justice, defend the cause of the wretched and the poor.”
(Proverbs 31:8-9)

There’s few things as repulsive as powerful religious organisations with their hand in the public till who sanctimoniously harass and belittle charitable people for not adherring to their irrational belief systems.

The case also highlights the importance of maintaining freedom from religion as well as freedom of religion in any Bill of Rights heading our way. God save us from those who want to save us! 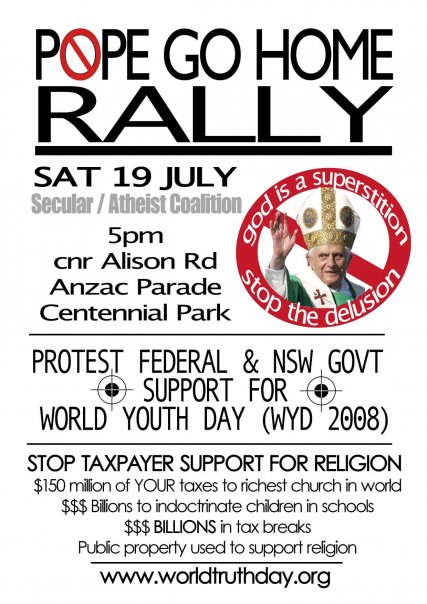 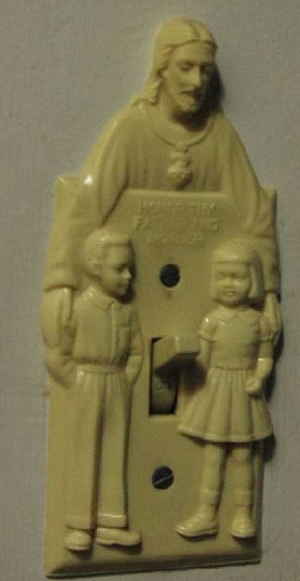 Scavenged from Pharangula, this delightfully symbolic piece from the planet’s premier throwback fertility cult stimulated gales of laughter in the Fringe residence. We do try always to look on the brighter side of life 🙂

Some of the hysterical captions proposed thus far:

“Jesus is the way, the wang, and the light.”

“Thy rod and Thy staff they comfort me.”

“Flip my switch and be enlightened.”

“Suffer the little children to come unto me.”

“Children turn me on.”

“Jesus was hung so that we may see the light.”

For more delectable examples of primitive Catholic folk art and wonderful satire knifing credulous Catho devotees visit the seminal Madonna of the Toast site. The most recent post, examining the divine significance of peculiarly shaped pretzels is funny! There’s easy eBay bucks to be found in your local supermarket. 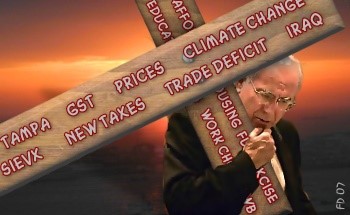 Lamenting that “God often struggles for media coverage in the modern world”, the unctuous Asstralian Archbishop George Pell gave his beleaguered deity a hand, advertising to his flock to “refocus on their personal faith and morality”.

Apparently, despite the Vatican’s interpretation of the Fifth Commandment “You shall not kill”, Pell doesn’t think war is a personal moral issue. Instead, in his yearly Easter homily, he preached

a preoccupation with issues like the war in Iraq and global warming can distract people from their personal responsibilities.

With a supposed direct connection to his deity through the Vatican on the other side of the planet, Pell assured us

“Jesus calls us to address the challenges in our own hearts, families and communities before we moralise about distant worlds, where we are usually powerless.”

Really. Where did Jesus instruct us to do this? In Matthew 5:16 Jesus is recorded as saying “Let your light so shine before men that they may see your good works.” Nothing there about quenching this light at the borders.

To avoid hypocrisy and bearing in mind the Second Commandment, Pell must insist the Vatican take his disempowering advice, retreat back inside its Roman walls, and pull its representatives out of other countries where historically it has proven to be one of the most powerful, moralising, interventionary forces.

“Howbeit the most High dwelleth not in temples made with hands; as saith the prophet.” – Acts 7:48

NB Notes on the Pagan origins of Easter and its political expropriation by the Catholic Church are here. Briefly

Bede’s Historia ecclesiastica gentis Anglorum (“Ecclesiastic History of the English People”) contains a letter from Pope Gregory I to Saint Mellitus, who was then on his way to England to conduct missionary work among the heathen Anglo-Saxons. The Pope suggests that converting heathens is easier if they are allowed to retain the outward forms of their traditional pagan practices and traditions, while recasting those traditions spiritually towards Christianity instead of to their indigenous gods (whom the Pope refers to as “devils”), “to the end that, whilst some gratifications are outwardly permitted them, they may the more easily consent to the inward consolations of the grace of God.” The Pope sanctioned such conversion tactics as biblically acceptable, pointing out that God did much the same thing with the ancient Israelites and their pagan sacrifices.