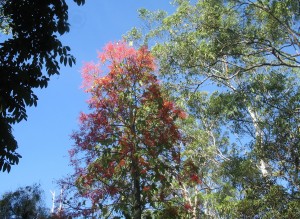 From invasion to resistance in Australia

“Capitalism could not flourish without crushing the resistance of people who wanted to live differently, writes Tom O’Lincoln in Red Flag. That has been true in every corner of the globe. Private property, wage labour and the drive to accumulate capital were incompatible with Aboriginal society. That incompatibility was the basis of the genocide that followed.”

Episode 22: Fuck Off You’re Full Of It* – We Don’t Celebrate Genocide

‘I concluded some time ago now that those who regard Australia Day as Invasion Day are right; the early governors such as Lachlan Macquarie viewed their conflict with the Aboriginal people as war and the terrible orchestrated violence against our Indigenous people lingered well into the 20th century.

Most Australians don’t know – or don’t want to know – about the extent of the violence that accompanied European colonial settlement and that is still synonymous for black Australia with Australia Day.’

Invasion Day: Nothing to Celebrate

Today, on Invasion Day while we remember that “white Australia has a black history” and commemorate the resistance of the Indigenous Australians and the survival of Aboriginal and Torres Strait Islanders and our cultures, it is also important that we stand in solidarity with refugees who are being incarcerated by the repeated Australian governments (including the Rudd, Gillard and Abbott govts) in hell holes on Manus Island and Nauru.

Unsurprised a Canadian settler makes the same arguments as zionists do to assert faux “Indigenousness”, like ‘I was born here’ and ‘the 1st Nations people once came from Asia.’ And this is a Canadian settler who supports the liberation of Palestine from zionism.

Settler colonialism is a crime against humanity wherever it occurs – Australia, Israel, US, West Papua, Canada etc. #endracism #decolonize

For settler racists, it's about stealing land, romanticising & exonerating the crime, then appropriating Indigenousness. #Invasionday

Angela Mitropoulos on borders, white supremacism and incitement of racism in Australia’s military

“The violence, and indeed increasingly extra-legal violence, that increasingly enforces these shifting bureaucratic and legal placements of the Australian border propels an ever-greater recourse to mythic or naturalised definitions of what it means to be Australian.

But even without these turns to an explicit Southern Cross fascism, widespread Australian emotional attachments to invocations of sovereignty are an expression of colonial anxieties and white supremacy. The borders of Australia are the legacy of English colonization. They are neither natural or eternal.”