Of Stoats and Boats 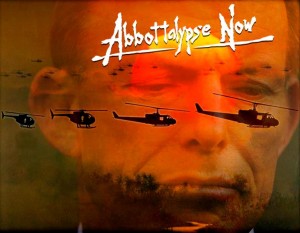 So here’s the day of voting depression
where Murdoch bigans pervert the election,
democratic choice stolen by stoats
Minime Canutes can’t stop the boats
but piss on the people to rise the tide
of ignorance, racism and bigotry inside
this greedy country that doesn’t want to share
and still bleats “Advance Australia Fair”.

Of Privilege and Dinosaurs

Clive Palmer elected, can it be true?
There’s never been a pollie quite like you,
with dinosaur pets and refloated boats
Who could begrudge a palmeresque gloat?
Surely it can’t be as bad as it seems,
Australia ruled again by miners’ dreams,
flogging the farm, building more dams –
Abbott looks like he’s won ten Grand Slams,
Yet when into the House waddles Clive Palmer
will the members remember to don their armour,
For he’s the only Clive in the village
Protected by parliamentary privilege.

And for posterity, my interaction with Warren Mundine on twitter.