The metal band Arch Enemy is scheduled to play apartheid Israel on 24th January, following their Khaos Over Europe Tour in conjunction with Amnesty International’s freedom of expression campaign.

Whilst Palestine is not one of the 9 cases on which Amnesty is focusing, those who do speak out in non-violent protest are targeted by Israel for example: Israel urged to lift Al-Haq director’s travel ban and also political prisoners of conscience detained in military prisons without trial or charge.

The BDS (Boycott, Divestment, Sanctions) group Don’t Play Apartheid Israel (DPAI) created a Facebook page to support the Palestinian call for BDS and to try to persuade Arch Enemy to cancel the gig in support of the oppressed Palestinian people.

PACBI (Palestinian Campaign for the Academic and Cultural Boycott of Israel) issued a very strong plea for Arch Enemy not to play apartheid Israel.

“Today, Palestinian civil society groups are calling on artists to shun Tel Aviv in the same way that South African activists called on artists to boycott Sun City. All we are asking is for you to refrain from crossing a picket line called by Palestinian society, endorsed by international organizations, and increasingly supported by progressive-Israelis [17]. Palestinian civil society is asking this of you as the most essential contribution to their struggle to achieve peace and justice. They are calling for nothing short of revolution, rebellion, and freedom, as echoed in the slogan of the BDS movement for Freedom, Equality and Justice.”

While espousing freedom of speech, Arch Enemy engaged in censorship and deleted all posts which asked them to refrain from playing in Israel and urged them to listen to and really hear the Palestinian people from their official FB page.

On Saturday 3rd December, Angela Gossow from Arch Enemy posted this on the BDS Facebook page, as well as the USACBI page:

Arch Angela: if the constant threat, bullying and slander of arch enemy via email and online does not stop immediately, we will publish some of the threats we have recceived from your supporters, where they claim they will come to some of our shows and threaten to attack us, both verbally and physically.

i am making amnesty international aware of your criminal methods and your breach of freedom of choice, freedom of expression and freedom of art. it is up to us (and only us!) to chose in which countries we perform and bring our message to. it is NOT yours to tell us what to do and to force your will upon us. you are hurting our rights of freedom and you make us fear for our safety. SHAME ON YOU! Music should transcend all races, political issues and borders – we will not be instrumentalised, neither by you or any other organization or government. who are you to tell us what to do?! Yesterday at 17:23

There were absolutely no threats made against Arch Enemy by BDS campaigners, rather attempts to highlight the terrible injustices that Israel subjects the Palestinians to and efforts to get the band to live up to its talk of freedom and equality and not to endorse a state which occupies, dispossesses and imprisons a people. 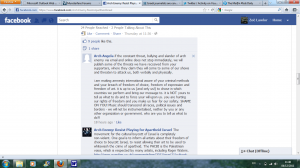 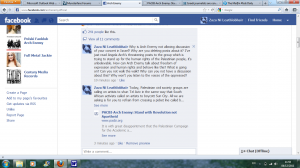 Today, further posts were removed from the Arch Enemy page, giving the lie to their claims of: “End repression. Allow expression!”

So, if Arch Enemy believes in freedom of expression, why do they engage in censorship? If they think there is nothing wrong in ignoring the Palestinians and playing in apartheid Israel, why not engage in discussion?

Another post in support of freedom of expression in Israel and BDS has been removed from Arch Enemy’s facebook page wall.

Israel rights group attacks government for curbing freedom of speech
Israel restricts freedom of expression and the right to demonstrate, a report by the Association for Civil Rights in Israel says.

Administrative Detention in the Occupied Palestinian Territory – Between Law and Practice [.pdf]

The detention of Palestinians by the IOF is carried out on the basis of article
78 (a-d) of Military Order No. 378 of 1970 on “Security regulations” (Judea
and Samaria), as well as subsequent military orders amending that order.
Based on these orders, any Palestinian can be held for eight days without
being informed of the reason for his or her arrest and without being
brought before a judge on the basis of secret information that neither
the detainees nor their lawyers have access to. The detainee can also be
prevented from meeting with his or her lawyer for two days and the IOF is
not required to notify the family of the detainee of the reasons for, or the
location of, his or her detention. Thus, it can be concluded that the IOF
violate the right of Palestinian detainees to be informed of the reasons for
their detention, as provided for in international humanitarian and human
rights law.

Addameer testifies at the Russell Tribunal on Palestine

Israel’s policies of large-scale and arbitrary arrest and detention of Palestinians are made possible by a discriminatory regime of law and institutions working in three main concurrent ways to maintain domination over Palestinians: first by applying a more advantageous legal regime to Jewish Israelis, whether residing in the oPt or in Israel; second by effectively criminalizing any opposition to the occupation; and finally by applying differing legal systems to different parts of the occupied Palestinian territory (oPt), thereby fragmenting and segregating the Palestinian territory and people.

In the West Bank, Israeli authorities carry out arrests and detentions of Palestinians by virtue of a system of military regulations in place since the beginning of the occupation. According to international humanitarian law, any new legislation enacted by the Occupying Power should be limited to regulations protecting the rights of protected persons or the security of the Occupying Power. The military orders issued by Israel, however, extend much beyond these limits and further criminalize any form of opposition to the occupation, legally cementing the oppression of the Palestinian people. Despite living in the same territory, Jewish settlers residing in the West Bank are not subjected to this legislation, but rather to Israeli civil law, applied extra-territorially. Under this separate and unequal legal regime, Palestinians are subjected to more severe detention and sentencing provisions than Jewish settlers, with little or no effective judicial oversight, most notably with regard to administrative detention. In addition, the military courts, through which these military orders are enforced, do not conform to international fair trial and due process standards, further contributing to the arbitrary nature of this regime.

Before Israel’s unilateral “withdrawal” from Gaza in 2005, a similar system of military orders governed the arrest of Palestinians in the Strip. Since then, however, Gazans have been subjected to a different legal regime than Palestinians in the West Bank and are instead mainly arrested on the basis of Israeli criminal law, under which they are automatically classified as “security” prisoners and suffer from harsher standards of detention and sentencing than their “criminal” counterparts.

In East Jerusalem, although Israel imposed Israeli civil law upon its illegal annexation of the city in 1967, Palestinian residents continue to be subjected to a dual system of law: Israeli civil law and Israeli military regulations. In that framework, Israeli authorities often detain and interrogate Palestinians from East Jerusalem under military orders, a system that permits longer periods of detention, before transferring them to the Israeli civil system for trial, where prosecutors can seek higher sentences based on the principle that security offenses are less common than in the military system in the oPt. The arrest and detention of Jewish settlers residing in East Jerusalem, however, is governed solely by Israeli civil law, which affords them greater protection and due process rights.

Finally, within the domestic criminal justice system itself, Israeli authorities discriminate between incarcerated Jewish and Palestinian citizens by defining them either as “security” or as criminal prisoners, with the overwhelming majority of the former being Palestinians. Classification as a security prisoner carries with it fewer legal guarantees and rights, with privileges such as receiving family visits without a glass divider, access to books or other items, and occasional visits outside the prison available only to criminal prisoners.

Furthermore, security prisoners are interrogated by the Israeli Security Agency, which often uses methods that amount to ill-treatment and torture. Criminal prisoners, on the other hand, are interrogated by the Israeli police, whose methods of operation are governed by a different set of rules. This has created two distinct regimes of interrogation, with the one affording less protection and rife with abuse used almost exclusively against Palestinians, whether from theoPt or Israel.

It therefore appears that Israel’s arrest and detention of Palestinians in the oPt and within Israel proper is governed by a regime of laws and institutions almost completely separate from the one administering the arrest of Jewish Israelis. Because this system enables the large-scale arbitrary arrest of Palestinians while generally affording them lower protections and guarantees than Jewish Israelis, it should be understood as a discriminatory institutional tool of domination and oppression against them.

Interview: Hunger strikes created “new sense of solidarity”
A Palestinian political prisoner’s take on Israel’s protest movement
PCHR Weekly Report: 2 Palestinians wounded, 23 abducted by Israeli troops this week
Nobel Peace Laureate Mairead Maguire on Palestine, Political Prisoners and Nuclear Weapons
Abraham Foxman in the Huffington Post: Israel’s democracy is eroding
Richard Falk on the Russell Tribunal : The importance of the RToP session is to strengthen the civil society case against the Israeli treatment of the Palestinian people. As such, it adds a certain quality of gravitas to such international initiatives as the Freedom Flotilla and the BDS (boycott, divestment and sanctions) campaign.

2 Replies to “Arch Enemy, Freedom of Speech and BDS”