Noone’s commented on the new design, and I didn’t expect them too – this blog has been allowed to meander and waste, while Jin strew and threw bouquets and brickbats elsewhere through the cyberverse. Redoing the decor was overdue – and the new template has lots of space and options for customisation without fuss. 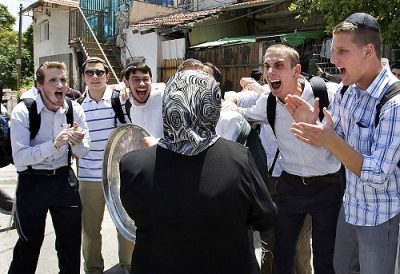 A Palestinian woman whose house has been occupied by Jewish settlers argue with Israelis who came to celebrate Jerusalem Day on May 12, 2010 in front of her disputed house in the east Jerusalem neighborhood of Sheikh Jarrah. Israel is celebrating the anniversary of the “unification” of Jerusalem, marking 43 years since it captured mainly Arab east Jerusalem during the 1967 Middle East war. Thousands of people, mostly nationalist-religious Jews, were expected to take part in an annual march through Jerusalem later Wednesday that culminates in the Old City at the Wailing Wall, one of the holiest sites in Judaism AFP PHOTO/AHMAD GHARABLI (Photo credit should read AHMAD GHARABLI/AFP/Getty Images)

Some peculiar synchronicity at the moment – it could almost be orchestrated. Folks seem to love Chomsky or hate him – I’ve long realised no theorist will satisfy my longing for human liberation completely and that minor points of contention are ubiquitous in the heated world of political discussion goes without saying, so tend to make my own judgment, regardless of what shibboleths I’m offending.

As an anarchist, Chomsky has been known to disagree with all national borders. But what’s this? Ali Abunimah wonders why the big C describes the “normal route” for colonialism – collaboration – in Palestine without condemning it and its neoliberal outcome. We hear also that very soon Israel will have a missile chastity belt and won’t be able to bleat any more about those pesky rockets to justify blasting Gazans with US supplied DIME bombs and white phosphorus. No doubt another pretext will be stimulated or invented to continue the collective punishment the zionists have perfected over the past 70 years or so which serves as a means of making life intolerable for Palestinians so they will be encouraged to leave. Sometimes, just the little things niggle – like today when the zionists capriciously declared the mail service between Gaza and the West Bank kaput.

Fright of the week has to be these maniacal settler boys harassing a Palestinian women, picked up by Mondoweiss – look at all those ferocious zioteeth!

Jin experienced the gnashing of the Israeli Ministry of Foreign Affairs teeth on twitter this arvo – the IMFA flunkey seemed to be pushing the same sort of lies it did during previous aid flotillas and convoys to Gaza – that Israel did provide aid, when it’s actually the international community which provides aid which the apartheid ziocolony lets through to the Gaza bantustan when it feels like it.

The FA Ministry hasbara team turned up on cue after this wee tweet, as @avinunu observed, apparently the reference resonated for them.

@IsraelMFA yap why do you say that?

@Jinjirrie gee thanks for letting other countries help the people in your #Gaza concentration camp, here’s the HR report http://is.gd/ciKSS

[that’s the real humanitarian reports – these reports are always available via reliefweb.int and should be obtained from the source, rather than from an untrustworthy intermediary.]

@Jinjirrie at least you aren’t a bot – Liberman coulda fooled me at times tho, what do you reckon?

@IsraelMFA i am not Liberman 🙂 and i do want that gaza to prospers together with israel, what do you think about hamas?

@Jinjirrie Hamas are the elected government of the Palestinian people tortured, bombed and stolen from by Israel, the US & UK 100 yrs tears
@Jinjirrie meant 2 say “phewww, at least you aren’t liberman” – so why two twitters, the med one & the idf one? latest MFA hasbara concept?
@Jinjirrie if you’re not Liberman, perhaps you could work on the inside to dismantle the racist zionist state 🙂 i will help you :))

. @milandroid seriously here’s one for you, @IsraelMFA & minions http://is.gd/ciTVD straight from my heart to yours, grok it dudes

I sent them the Human Sciences Research Council of South Africa (HSRC) 09 study which found Israel is practicing both colonialism and apartheid in the Occupied Palestinian Territories.

Jin to . @medicare2gaza don’t they train you properly at those luxury hasbara weekends anymore? very disappointed

Jin to @medicare2gaza no you are right, gaza is not israel, still, they both have walls around them – whose are really higher, do you think?

Jin to @medicare2gaza why are you imagining that it is israel’s aid? it isn’t – it’s international aid, that israel only sometimes lets through

@Jinjirrie i can see it all now – the ziohasbaratwitter machine is being oiled to counter the flotilla as well … groan, fanatics are sooo predictable

avinunu: @Jinjirrie put yourself in @IsraelMFA’s position. Trying to make excuses for Israel is like putting lipstick on pig as Ms Palin would say.

Gaza Flash Appeal Feb 2009, along with lots of data about international donors and needs.

I think that if the Israeli government were interested in perpetuating its apartheid for a little longer, it would let the boats in. The WHO—as mainstream as organizations get—has recently called on Israel to lift the siege on Gaza. John Ging has called for a sea-lift to bring supplies in, effectively putting UNRWA’s stamp-of-approval on the boats. The Israeli government, when it attacks the boats (and please asshole Zionist readers let me be wrong about this one!), will make an exceptionally bad scene for itself. Not quite at the level of the winter massacre. But it will look foolish. It will be making an unusually stark decision, choosing to ally itself with precisely no one, against nearly every government in the world, against mainstream civil society organizations that are far to the right of the Palestine solidarity movement. Israel could make itself look good by letting the boats in, with the help of stenographers like Ethan Bronner, but there is no way it will do so.

The ziopathology is daily more florid, the chronic condition has become critical.

Do they think that the counter flotilla, armed with banners reading, “Hamas Sucks,” and “The Armenian Genocide Happened!” make Israeli civil society look like anything but fools? If they had any interest in the symbolism of their actions they’d commandeer the counter-flotilla and ask them why they’re behaving so inanely. Publicizing their naval exercises in which half the Israeli navy is participating? Utilizing half of their war fleet to stop boats carrying diapers and dialysis machines? Come on now.