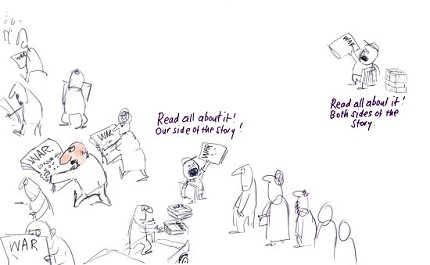 Con Coughlin does it again in this waffly piece of shillery, overflowing with unnamed senior sources, claiming Israel is seeking authorisation from the Pentagon to whack Iran. Interestingly and simultaneously, the uber conservative Daily Telegraph broadcasts this story wherein Cheney warns that military action against Iran remains a possibility.

The subject has a revealing history of similar deceptive preemptive pro-war journalism. Is MI6 involved as well?

A report, put together by Campaign Iran and published at the end of 2006, revealed that Daily Telegraph’s political editor Con Coughlin, the man who ‘broke the story’ of Iraqâ€™s 45 minute WMD capacity, was behind 16 articles containing unsubstantiated allegations against Iran over the past 12 months. The Press Complaints Commission has launched its third investigation into Coughlin in as many months after a number of high level complaints about his latest article on Iran. The investigation is looking at an article by Coughlin on 24 January relying on an unnamed “European defence official” alleging that North Korea is helping Iran prepare a nuclear weapons test.

Back in 2000, the British Journalism Review remarked that “officers of MI6… had been supplying Coughlin with material for years.” It is known that the MI6 has a shadowy programme called “I/Ops” (Information Operations), whose activities within Fleet Street have never before been so clearly exposed.

Supposing the Tele story is an MI6 plant, what should we make of this Times Online story that several US generals are prepared to resign if Doodoo gives the order to attack Iran?

â€œThere are four or five generals and admirals we know of who would resign if Bush ordered an attack on Iran,â€ a source with close ties to British intelligence said. â€œThere is simply no stomach for it in the Pentagon, and a lot of people question whether such an attack would be effective or even possible.â€

A British defence source confirmed that there were deep misgivings inside the Pentagon about a military strike. â€œAll the generals are perfectly clear that they donâ€™t have the military capacity to take Iran on in any meaningful fashion. Nobody wants to do it and it would be a matter of conscience for them.

â€œThere are enough people who feel this would be an error of judgment too far for there to be resignations.â€

A generalsâ€™ revolt on such a scale would be unprecedented. â€œAmerican generals usually stay and fight until they get fired,â€ said a Pentagon source. Robert Gates, the defence secretary, has repeatedly warned against striking Iran and is believed to represent the view of his senior commanders.

The threat of a wave of resignations coincided with a warning by Vice-President Dick Cheney that all options, including military action, remained on the table. He was responding to a comment by Tony Blair that it would not â€œbe right to take military action against Iranâ€.

Perhaps there are secret wars within the intel agencies themselves. Who is feeding the pro-war line in the Brit press and the Pentagon? Could it be none other than the recently departed torturer and his evul cohorts? Seymour Hersh spills the beans on the United Stupids tilt toward Iran:

The key players behind the redirection are Vice-President Dick Cheney, the deputy national-security adviser Elliott Abrams, the departing Ambassador to Iraq (and nominee for United Nations Ambassador), Zalmay Khalilzad, and Prince Bandar bin Sultan, the Saudi national-security adviser. While Rice has been deeply involved in shaping the public policy, former and current officials said that the clandestine side has been guided by Cheney. (Cheneyâ€™s office and the White House declined to comment for this story; the Pentagon did not respond to specific queries but said, â€œThe United States is not planning to go to war with Iran.â€)

Ironically, the tilt against the Shite Iranians will benefit the most radical, fundamentalist Sunnis, from whom the likes of Bin Laden came. Whose side are the torturer’s mob really on?

â€œThe Saudis have considerable financial means, and have deep relations with the Muslim Brotherhood and the Salafisâ€â€”Sunni extremists who view Shiites as apostates. â€œThe last time Iran was a threat, the Saudis were able to mobilize the worst kinds of Islamic radicals. Once you get them out of the box, you canâ€™t put them back.â€ The Saudi royal family has been, by turns, both a sponsor and a target of Sunni extremists, who object to the corruption and decadence among the familyâ€™s myriad princes. The princes are gambling that they will not be overthrown as long as they continue to support religious schools and charities linked to the extremists. The Administrationâ€™s new strategy is heavily dependent on this bargain.

Nasr compared the current situation to the period in which Al Qaeda first emerged. In the nineteen-eighties and the early nineties, the Saudi government offered to subsidize the covert American C.I.A. proxy war against the Soviet Union in Afghanistan. Hundreds of young Saudis were sent into the border areas of Pakistan, where they set up religious schools, training bases, and recruiting facilities. Then, as now, many of the operatives who were paid with Saudi money were Salafis. Among them, of course, were Osama bin Laden and his associates, who founded Al Qaeda, in 1988.

What is the payoff for the torturer? More war, re-election of the neocons, more oil, more profits for Helliburton etc. – his mates.

One Reply to “Shilling for a War”