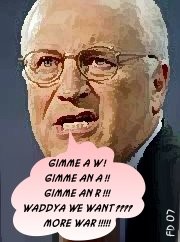 Whorestralia is cursed until Sunday this week by the presence of arch-neocon Cheney. We are wondering what shennanigans the torturer has up his sleeve prior to the next US election.

It is understood he said Democrats in the US were riding public opposition to the war that could end up prejudicing their leadership credentials. He said the mood could easily shift if there was another terrorist attack.

Bin Laden would benefit immensely from the gungho Repubes winning the next US elections, as unlike the more sophisticated diplomatic Dems, the militaristic Repubes fall into his traps so easily. Thus, whether there’s to be a false flag op (and at this point because of Doodoo’s inveterate deceit, there would be a lot of people suspecting another attack would be just that) or the genuine article, the United Stupid of Vice well knows the lovely game of fear which he has played with his swooning public so successfully in the past.

… U.S. Republican Senator John McCain’s view that the only thing worse than a military confrontation with Iran would be a nuclear-armed Iran.

“They appear to be pursuing the development of nuclear weapons.”

In his interview with the Australian, the ghoul hinted at possible timing for aggression by the United Stupids.

“You get various estimates of where the point of no return is,” Mr Cheney said, identifying nuclear terrorism as the greatest threat to the world. “Is it when they possess weapons or does it come sooner, when they have mastered the technology but perhaps not yet produced fissile material for weapons?”

Using Whorestralia as a sounding board, Cheney ‘appears’ to be geeing the world up to expect a military response to Iran’s supposed but in fact non-evident plans, ostensibly to further long held evil ambitions for US world hegemony.

Howard conflates Iraq with Iran, jumping on the torturer’s coat tails to paint by numbers the picture of the next imperial ‘enemy’.

“I don’t think there would be a country whose influence and potential clout would be more enhanced in that part of the world than Iran’s would be if the coalition was defeated in Iraq,” Mr Howard said.

“I don’t think you can separate the two.”

“Iran would be emboldened if the coalition was defeated in Iraq.”

“And that would be seen to have occurred if there was a significant coalition withdrawal.”

Yet Doodoo has burned his political capital and credibility in Iraq – its highly unlikely at this juncture that the Dems will permit him to whack Iran without some very convincing (non-manufactured) evidence of real intent by Iran to produce nukes, especially when they are currently attempting to remove Doodoo’s authorisation for the war against Iraq. Neither Russia nor China are keen on military ‘solutions’ so the US would need to ignore the UN Security Council unilaterally.

However, if the torturer and his fellow deluded neoziocons do get their way for more perks and profits for good mates Helliburton etc., the already stretched US would be fighting on three fronts which conceivably would swiftly become several more. US prestige, its economy and hegemony would decline more rapidly, and other economies, including ours, would follow. Al Qaeda would rejoice again as another trap yielded fruit – it would be bolstered with a flood of newly inspired fresh recruits. If Whorestralia supported the US militarily in its brand new adventures, naturally our own security would be further endangered. As our dollar dropped, foreign companies would have a field day buying up our mineral and other resources. Our wages and purchasing power would plummet as inflation and interest rates took off whilst our economy and wealth distribution statistics would lurch toward parity with our third world neighbours.

Gold, silver, oil and other fuels, essential goods and services would do comparatively well.

Little Johnny channels his gruesome hero by taking his usual vicious hard line against 85 Sri Lankan refugee boat people, who are accused of sabotaging their boat motor to avoid being turned back home on the high seas to probable death. Sri Lanka is the country where suicide bombing was invented, with a tripartite conflict going back years between the government, which disappears dissidents, thus provoking hatred and retaliation amongst the locals, insurgents in the south and guerillas in the north.

Read Michael Ondaatje’s “Anil’s Ghost” for sensational insight into the plight of the impoverished locals of Sri Lanka.

5 Replies to “Torquemada in Oz”