‘Another glass of bubbly, darling?’ Of course she would. And if her prim mouth was sipping on delicious Taitinger, I might squeeze a word in edgeways.

‘I was going to tell you about the absolutely best thing that happened last year – while you were in Iran.’ My niece Emma is a foreign correspondent for one of the better daily newspapers. She peered at me over her flute and grimaced. I pushed on before she could interrupt.

‘Malcolm asked us out on his yacht. Just a day out round the harbour. John and Peter were there too of course,’ I said.

Scowling, Emma interjected, ‘I bet no one mentioned the latest wealth distribution figures’.

Emma could be a real darling, but really, when would she grow up and forget her quaint socialist ideals? We all voted left in our twenties of course, yet there’s no excuse after one is over forty and successful for not supporting those who look after us. Emma liked to retort that people vote for the tories in their elder years because of neurological degeneration caused by too many alcohol-drenched cocktail dos.

‘What’s that you say? Not the P word! My goodness, John and Peter have run a very tight ship and you should be grateful. You know, darling, the poor are looked after as we become richer! Between you and me, the poor only deserve the scraps anyway. In these days of full employment, you must admit all the evidence points to the fact that they are genetically deficient and chronically lazy. They’d never make crew on Malcolm’s lovely super-maxi’.

‘As a matter of fact, there was a young thing on Malcolm’s yacht, a relative of Peter’s, I think, her name was Beth, who was moaning about the P word. I told her over drinkies “The poor will be cared for if us capable captains of industry are rewarded with lots of incentives for our expertise – more chunky remuneration packages, lovely options and rights issues – after all, we make the important wealth for ummmmm … everybody. Trickle down economics work, you know. More for us means more for them.” She was quite taken aback I think, because she began to look at me very strangely. More foie gras for you, sweetie?’

‘No thanks’, Emma replied stiffly.

‘Don’t clench your teeth, darling, it looks so unattractive,’ I cautioned. ‘Anyway, Beth said to me “You must admit that long term unemployed people need support – think of the soaring crime rate if they have nothing.”‘

‘Pull the other one, darling, I laughed at her. You know it’s their own fault. Lazy mental deficients who should be purged before they breed more like themselves, darling. They’re not worth worrying about. I know it sounds awful, darling, but really we should chain them in the mines along with their tawdry offspring from age five as they did in the good old days! Goodness knows we need more mine workers at the moment! Forget about them and concentrate on the Sydney to Hobart and your next fabulous allotment of free entitlements, darling. We’ve worked hard for all this.’

‘Really, Emma, her face was turning a dreadful shade of puce’. I giggled. ‘Please pour some more champagne, darling, I’m so glad we managed to close out our last company when we did and can still afford the good stuff. Pity about the shareholders but they should have taken more care – caveat emptor as Daddy, and you know what a successful property developer he was, well until those ghastly green bans, used to say’.

I pursed my lips. ‘Then Beth started in on Johnny’s media laws, defending that dreadful leftie ABC that *our* taxes pay for. She had the gall to insist that Johnny’s government is the highest taxing government in Australia’s history!’

‘Well, Emma, I put her straight.’ I smiled at Emma triumphantly.

‘If you are having tax problems, dear, I said, you should find yourself a new accountant. Pay taxes … you must be joking! none of our companies have *ever* paid a cent! yet look at all the jobs we created with the help of those wonderful government subsidies – six months of them, then when they run out, fire the little dears and take on new ones with new subsidies. Full employment is good for us all!’

‘When our last company went under … poor shareholders again, but there you go … the trainees were up for replacement anyway. In our next venture though, we’re going to import foreign workers … they’re all the rage, you know, they work for peanuts and don’t complain like the ungrateful local refuse.’ 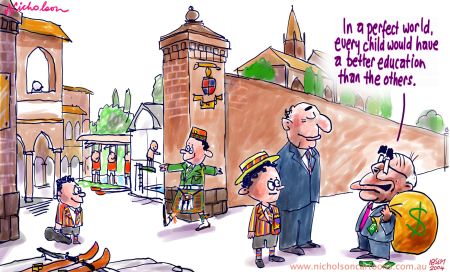 ‘Meanwhile, we don’t want all our lovely tax money spent on no-hoping, genetically modified, bone-lazy, bludging dead weights … when it *should* be spent on making life easier for those who deserve it and who have the social qualifications – us, and our gifted, rich children, like you, darling. Private education costs the earth these days, you know.’

‘”And what about education for everybody?” Beth asked me’.

‘Well, I had her there, sweetie. “I’m sure dear Johnny would provide more funding for education of those disgusting long term unemployed menaces and their fifth rate offspring if he believed they were capable and willing. But they’re not, are they. They are just trash. It’s *their* fault and like breeds like, darling. We’re not responsible for their chromosomal failures. Obviously, we need more funding for *private* schools … because it’s people like *us* who were born to succeed. We must invest our money where it will do our country the most good.”‘

‘Well, Beth began yelling at me. “I expect you think disabled people are on the take too!”‘

‘”Well, yes actually, dear,” I replied. “Let’s not forget about those gouging fakers. Their lack of conscience and the way they pool their far more than generous allowances is dooming Australian society and our way of life.”

‘”I know people who could work a computer with their left foot if they wanted and who should be working right now! there’s plenty of work if only they’d try, but they just don’t seem to want to work, do they. Let’s take away their wheelchairs and catheters and see how they like it then.”‘

‘Well, dear, at that point, Beth began to move toward me with a look of total fury And right at that moment who should walk between us but dear John and Peter. Well, she bowled into them, the clumsy wench, didn’t she’.

‘Into the drink they went, both of them. Politicians overboard! John seemed to have trouble keeping his head above water, and between you and me, I could have sworn Peter was really trying to keep him under. Of course we contained our laughter – it wouldn’t do to upset them – threw life buoys, hauled them out and everyone swore to keep it out of the papers. Beth was posted to Swaziland not long after, I believe. Later, over canapes, John promised to look into an investment subsidy for our new company venture on the q.t. too – so thoughtful of him.’

‘Not quite sure, darling, but Malcolm was snapping away earlier that day. Anyway darling, you must remember, dear, to trust the super-maxi you know, where we who deserve it are assured a place on the crew. After all, *we* are the captains of industry and backbone of this country and deserve every drop of this delicious champagne! Now would you please pass that bonus rights acceptance form if you wouldn’t mind? Emma … Emma?’

Through the window I watched her stalk to her car, mobile phone in hand. Oh dear. Surely no one would possibly believe her!

One Reply to “Pass the Bubbly, Darling!”