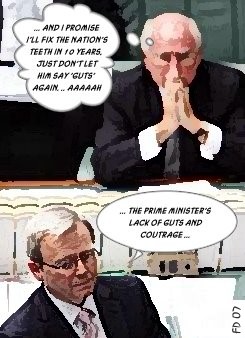 Kevvie strikes back at Johnny with a near knockout blow, and although we wish he would bring the focus back to the government’s palpably weak point – climate change – while the issue is still hot and before Johnny shepherds the electorate into unctuous worship of his economic record, he is maintaining an impressive, logical front. Johnny’s actions, along with his quivering whiskers when interviewed by Kerry O’Brien on the 7.30 Report last night, betray the fact that he is losing the Iraq debate even without and perhaps in spite of a head to head confrontation with Kevvie.

Johnny’s mob stifled debate on Iraq in Parliament this morning – run away, run away – and this morning Johnny fails to up the ante on 2GB with Alan Jones, bleating that a national televised debate with Kevvie would be just a smokescreen.

Talk about projection. We also think that Johnny’s conviction, oft repeated on the 7.30 Report interview that Australia cannot afford American defeat and humiliation in Iraq may also be projection – it is Howard who needs ongoing conflagration to maintain with his comfortable war leader, best buddy of Doodoo image into the run up to our next election. Interestingly, Paul Kelly picks up on this too in a particularly scathing column. 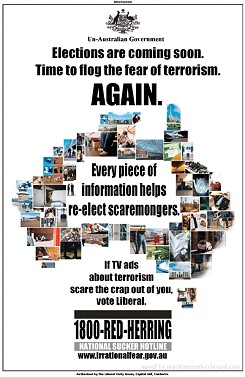 Kevvie smartly rejoinders to Johnny on ABC: “What is his alternative strategy, if he’s a man of courage, to tell the Australian people about how he intends to win the war in Iraq.” Reasonably, Kev indicates his flexibility to consult with the US on early withdrawal and his approval of the Baker-Hamilton Iraq Study Group Report.

At this point, we have to wonder whether the Australian media is at last turning on Johnny?

Leunig’s hilarious cartoon for today is also worth a squiz. And so is Patrick Leahy’s Valentine card from John to Doodoo.