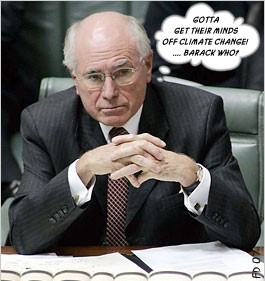 Yep, little Johnny Rodent has shown he can limbo down further even than Alexander Beetle when it comes to backing their best mate, Doodoo Dubyah. Our cheeky prime monster takes to Dem presidential contender Obama and the Dems en masse with his baseball bat, and the world cringes.

“If I was running al-Qaeda in Iraq, I would put a circle around March 2008, and pray, as many times as possible, for a victory not only for Obama, but also for the Democrats,” our intemperate Doodoo-worshipping prime monster decreed to goggle-eyed Americans and all and sundry. Sounds like Johnny thinks he has a telepathic connection with OBL. His wires are crossed though because OBL and co have declared their love for Doodoo on several occasions, logically aware that crass, stupid chest-thumping and warmongering delivers lots more fanatical supporters for the Al Qaeda agenda than the Dem’s sophisticated diplomacy. 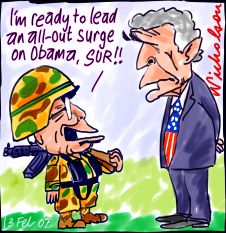 Obama swiftly volleyed back, calling little Johnny’s shameless reacharound with best buddy Doodoo “empty rhetoric” and inviting him to put his troops where his mouth is.

According to an October 2006 poll conducted by the Lowy Institute for International Policy, this is a view shared by the majority of Australians. It found that 84 per cent of Australians believe the Iraq war has done nothing to lower the threat of terrorism.

Two-thirds of respondents disagreed that the war would lead to the spread of democracy in the Middle East, and 91 per cent said they believed that the Iraq war had worsened US relations with the Muslim world.

Executive director Alan Gyngell said the poll showed a strong trend in the attitudes of Australians toward the Iraq war. Referring to the Australian public’s long-standing skepticism about intelligence used in the lead up to the US-led invasion, Mr Gyngell told ABC Radio, “The debate seems to be over about the reasons that we went into Iraq, that is 84 per cent disagree with the statement that the threat of terrorism has been reduced by Iraq. There’s pretty strong agreement that is hasn’t worked.”

He also said that, “There’s a very strong view that the US has too much influence on our foreign policy.”

Both Dems and Repubes expressed their annoyance with Johnny’s craven plug for the United Stupids’ latter day Caligula. But that didn’t stop the heroic Alexander from missing an opportunity to suckhole his leader *and* Doodoo contemporaneously.

“It’s a free world, and we are entitled to a point of view,” he grovelled. Well so are we, Alexander, so are we and from the Lowy Institute’s study, it looks like you are way off beam if you think Australians support you and Johnny’s sycophantic warmongering.

Kevvie homes in on Johnny’s mighty blunder with what seems to be a growing killer instinct:

“I cannot understand how any responsible leader of this country can say … that the Democratic Party of the United States, is the terrorist party of choice,” he told Parliament.

Quite right, Kevvie. Little Johnny tries to slither, backpedal and lie that he didn’t say ‘all the Dems’, but to no avail, his words are there in black and white. And neither will the rodent retract his Obama accusations. What a loyal Doodoo servant he is. 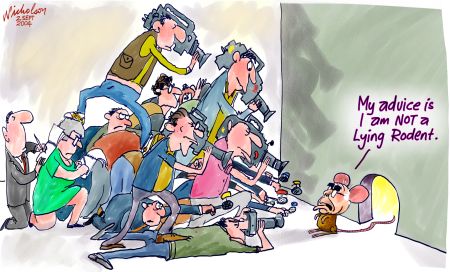 Paul Keating scores the best Johnny paddywhack of the day after the shock horror latest polls show Rudd and the ALP way in front:

“He’s become an old desiccated coconut, hasn’t he, and he stayed too long,” Mr Keating said.

“He had a chance to get out, give it to Costello, but he wants to hang on. You know prime ministers have got araldite on their pants, most of them, they want to stick to their seat and you either put the sword through them or you let the public do it.”

3 Replies to “Johnny can go lower”