At his address to the IIA in February this year, Michael Kirby shared some prescient, relevant insights:

“We are moving to the point in the world where more and more law will be effectively expressed, not in terms of statutes, solemnly enacted by the Parliament and sent to the Governor-General for the royal assent – but in the technology itself. What Lessig calls, “Code”. Embedded in the Code, on a multinational basis and effective across borders in a way that could not have been dreamt of in the past, will be effective regulation, expressed in the technology itself.

This is a very important and new development. It’s a development that is not initially in the hands of democratic legislators. They don’t set the balances and adjust the competition between free usage and fair usage, free expression and protection for copyright. This is not going to be done in that way. It’s going to be done in big corporations, protecting their own interests.”

“It could go either way. Either this is the last gasp of government attempting to censor the internet – and it is going to run into the same sorts of technological and legal brick walls previous attempts have – or the Government will have succeeded in getting their hooks into the internet.”

“And then you can be absolutely sure that every special interest group will be lining up to have their particular bugbear dealt with. The copyright lobby will be first in line to have file sharing websites banned. Then you’ve got two gentlemen with significant influence due to the balance of power in the Senate – Senator [Nick] Xenophon, who is against internet gambling, and Senator Fielding, who would be against all adult material on the internet. It’s not panic mongering to say that; these people are on the record.”

To date the most enthusiastic participant in Conroy’s filter “trials” is Primus, whose CEO Ravi Bhatia said “It’s easy for us to do it”. Optus will trial filtering of the ACMA blacklist “limited to a specific geographic area, with customers given the option to opt out of the trial.” iiNet is participating “to make sure the public, media and political players are well informed and realise that it is bad policy. We hope that the outcome of this trial will be the final nail in the coffin of this misguided approach, which seems to re-surface with every new minister.”

The trials are expected to start on December 24 and run for a 6 week period.

Under Conroy’s proposed cybersafety plans, $44.m is set aside for ISP based filtering.

How can we, the public, ensure *our* interests are protected, when our access to information on the internet is under attack by government, religious groups, moral panickers and business interests?

Ban.This.Url.com scoops the pool with a stunning interview with security expert Matthew Strahan, whose precise knowledge, if it was understood by Rudd and his minions, should alone cause Conroy’s net censorship plans to be canned as an extremely tasteless, dangerous joke. 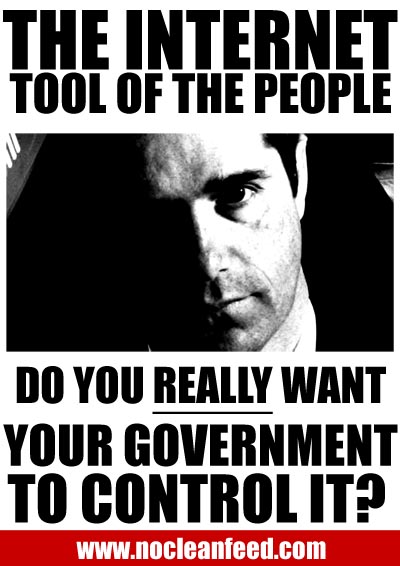 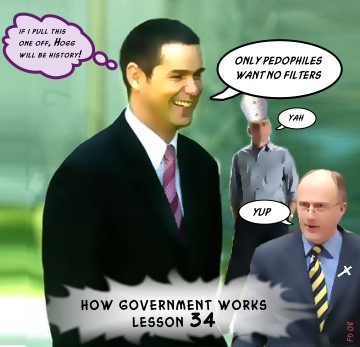 Congratulations to the AFP who have busted another clutch of child proners. The ring used a private peer to peer network to traffic their sordid cargo, as distinct from the web http protocol which Conroy’s vaunted ISP filters will throttle.

“We have offenders here who range from unemployed through to Queen’s Counsel, through to childcare workers, police officers,” Deputy Commissioner Colvin said.

Basking in the reflected glory of the police sting, the saturnine Stephen Conroy muddied the waters by concatenating other reasonable strategies with his proposed web censorship filters.

“The internet offers a wide range of opportunities for all Australians, but for the nation to truly benefit we need to ensure a safe online environment,” Senator Conroy said.

“The Rudd Government recognises that there is no silver bullet solution to cyber-safety and is investing $125.8 million in a comprehensive range of measures, including law enforcement, education, content filtering, research, international cooperation and a youth advisory group.”

Conroy still hasn’t let the public know precisely which ISPs will be participating in the next set of closed loop web filter trials, though iiNet says it is participating to show how useless they are and Optus says they’re in. Nor has the public been informed if the results of the forthcoming dummy trials will be available for independent scrutiny.

From the whirlwind of complaints on the Conroy / Tanner blog, (if one can call such a poor effort at net communication a blog at all given there is no interaction forthcoming from the high and mighty, no threading of the back to front comments, no archive and no continuity of posts, ), it’s clear the public are well-informed about web censorship and are very angry. Most comments call for an abandonment of the policy and many demand Conroy’s removal.

The Fringe cynically suspects the exercise is ‘consultation’ in the usual patronising governmental style – just for show, to help the punters feel ‘involved’. The real decision has already been made by the Hollow Men, and will be executed regardless of criticism and advice from experts and the public. Has the upper echelon of Labor been overrun completely by puritanical Old Guard dinosaurs, is Conroy after Hogg’s job or is courting the wowser votes of Fielding and Xenophon so imperative Labor is willing to run the gauntlet of millions of angry Oz internet users at the next election?

Around the traps, Broadbanned Revolution provides a scoop from the UK, revealing the rationales used by ISPs there who do not censor their feeds.

Abroad, Conroy’s ISP filters are highlighted in the New York Times. However the article fails to mention that both filters proposed by Conroy would be mandatory for ISPs to implement, with an opt out choice only available on the second.

Internet pothole, Clive Hamilton, is quoted with another of his ubiquitous false analogies:

“The laws that mandate upper speed limits do not stop people from speeding, does that mean that we should not have those laws?” he said. “We live in a society, and societies have always imposed limits on activities that it deems are damaging.” he said. “There is nothing sacrosanct about the Internet.”

Ah, Clive, speeding limits don’t damage one’s car engine or the roads on which one drives, in fact quite the reverse. 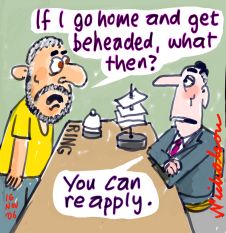