Further to the previous written report of the protest held outside the offices of the Board of Deputies of British Jews, the video above captures the testimonies of people from British Jews Against Genocide who participated.

Here’s selections from some of the powerful speeches at the event:

Selma James: “I have to remind people of the stories that Jews told when they came to England to ask for English help because they were being taken to the death camps. And the Foreign Office said that the Jews were hysterical, that it wasn’t really true, that it wasn’t really happening, and when they finally convinced Churchill to bomb the tracks to Auschwitz, the Foreign Office refused to do it and I am reminded of that because today what’s happening to Palestinians is being dismissed by the media, is being demeaned by the media. It’s the same history repeating itself because the people who are being slaughtered are not being listened to, are not being taken seriously.“

Yael Kahn: “Intentionally Israel sees the women and the mothers and children as their main targets. Israel’s fight is not against Hamas, Israel is fighting against the people of Gaza.“

Barnaby Raine: “We’re here to present the other tradition in Jewish history, the tradition of solidarity of standing with the oppressed. Not just standing with Jews but standing with whoever they are when they are oppressed. So that’s why we stand with the Palestinian people and we as Jews and human beings support Boycott, Divestment and Sanctions against the state of Israel.“

My email to the Chancellor of the University of Illinois, Phyllis Wise, objecting to the firing of Professor Steven Salaita and demanding his reinstatement is below. You can send one too. 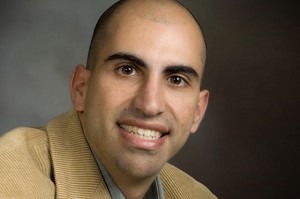 I am shocked and dismayed that you would end the employment of the honourable Associate Professor of American Indian Studies, Steven Salaita, due to pressure from those who place the indefensible – the genocidal actions of settler colonial Israel toward Palestinians whom it occupies, oppresses and sieges in Gaza – before academic freedom and ethical educative values.

Would you have treated Nelson Mandela and Martin Luther King similarly for their strenuous public advocacy for attainment of rights for the rightsless because racists objected to their appointments? It is not uncivil nor bigoted to challenge racism.

Should academics be gagged from expressing political analyses and opinions in public so that the tender sensibilities of racists, white supremacists and nationalists are not offended? Surely one of the roles of education is to civilise people through learning to shed their prejudices and ignorance. Further, no state or political ideology should be quarantined from critique. To punish people for critiquing the Israeli regime or any other state undermines the foundations of democracy.

What message are you sending to other academics who oppose injustice and oppression? Why side with and encourage today’s McCarthyite bullies and their witchhunt of dissenters?

Please act judiciously in the spirit of civilised values, academic freedom and democracy – restore your reputation by re-employing Steven Salaita.

Today an Israeli based law centre, Shurat HaDin, filed a case in the Federal Court of Australia, against Professor Jake Lynch from the University of Sydney’s Centre for Peace and Conflict Studies. They claim that he has supported policies which are racist and discriminatory by his specific endorsement of an academic boycott of Israeli institutions and individuals representing them. Jake Lynch has refused collaboration with Hebrew University because of its support of the illegal occupation of Palestine and close connections with the Israeli armament industry.

This lawfare attack against academic freedom and freedom of speech has been condemned by over 2000 Australian and international human rights advocates from some 60 countries, who have all signed a pledge supporting Boycott, Divestment and Sanctions against Israel because of its well documented and clear violations of international and humanitarian law, and offering to be co-defendants in any legal action taken against Lynch.

Shurat HaDin has taken many similar actions internationally against groups who support the BDS movement. Professor Stuart Rees comments, “It seems that this firm, Shurat HaDin works in the civil courts as a proxy for the Israeli government and security forces, seeking to shut down any criticism of the state of Israel and its ongoing human rights abuses and violations of international law.”

In August, Shurat HaDin lodged a complaint in the Human Rights Commission against Jake Lynch’s refusal to sponsor an Israeli academic from the Hebrew University, now they want to silence this highly regarded academic, by taking their complaint to the Federal Court. This challenges the right to take non violent action in support international human rights law and the rights of the dispossessed Palestinians. Australians for BDS condemns racism in all forms, and specifically anti-Semitism.

“Israel’s occupation and ethnic cleansing machinery continue unabated but the moral force that used to drive that process is fast eroding and, as out of touch as the Abbott government and anti-BDS activists in Australia may be, there is an undeniable shift in the balance of moral power. International civil society is holding Israel to account in a way no government has ever been able to do”.

MK Tibi rejects the witchhunt cooked up against him by the hasbaroid Palestinian Media Watch.

‘Tibi showed the Forward a clip from his speech at this year’s Palestinian Martyrs Day rally, on January 7, where he named people he considers “martyrs,” all of whom were civilians killed by Israel and none of whom perpetrated attacks. By editing last year’s clip to give a different message, Palestinian Media Watch “tried to violate and mislead,” he said.’

Tibi’s satirical poem about MK Anastasia Michaeli’s throwing a cup of water over him during a Knesset sitting also annoys the linguistically challenged Knesset Ethics Committee which bans him from the Knesset for a week for his literary prowess. Who says poems don’t bite and sting in all the right places?

‘The issue in this case was his reading of an allegedly offensive poem from the Knesset podium aimed at Anastasia Michaeli, a lawmaker from Yisrael Beteinu. On January 9, Michaeli, herself a sometime practitioner of politics by provocation, threw a cupful of water into the face of Arab lawmaker Ghaleb Majadle, of the Labor party, after Majadle called her a “fascist” during a Knesset debate. Michaeli was banished from all parliamentary proceedings for one month as punishment for her misconduct.

In his poem responding to Michaeli, Tibi said the Yisrael Beiteinu member had “a problem with her plumbing” and used the Hebrew term “cos amok,” or “cup of frenzy” to describe her act.

The Knesset’s Ethics Committee took this phrase as an innuendo, as it sounds like an Arabic curse that refers to female genitalia, and imposed its ban. Tibi denies any innuendo. “Worse than its stupidity is it not knowing Hebrew,” he said of the committee. ‘

And now, the poem:

“Anastasia, / Who has a problem with her plumbing, / Grew in the dung beds of our home Israel — or shall I say, Russia? / From there it was a short way to the Law of the Muezzin, / Which meanwhile has been / Turned into a joint Bibi [pronounced by Tibi bibey]-Anastasia project, / A thoughtless use of water in time of drought / When every drop counts. / Israel is drying out / But is not ashamed. / Anastasia ran amok and poured / Water on a colleague. / And so I’ll call a spade a spade, / That is, a cup of frenzy.”

That may not make a whole lot of sense to you, much less seem a literary gem — but that’s only because you don’t have the original before you. How many delicate little touches you would notice if you did! The rhyme of “Anastasia” and instalatsia (“plumbing”), for example; or the play on arugot ha-bosem, “spice beds,” from the Song of Songs (“My beloved has gone down into his garden, unto the beds of spices”) and arugot ha-zevel, “dung beds”; or the pun on “Bibi” and bivey, “sewers”; or the inversion of mityabeshet, “is drying out,” and mitbayeshet, “is ashamed.”

Kudos to MK Tibi for his dry wit!

I’m reminded of Henry Lawson and his immortal lines on Australian wowserism:

O this is the Wowsers’ land,
And the laughing days are o’er,
For most of the things that we used to do
We must not do any more!

The power of literature is demonstrated again in Israel recently.

Israeli fascist organisation Im Tirtzu attempts to have Palestinian actor banned from performing in a Lorca play. Fascists are frightened of intellectuals, classically their prime targets. The intellect might restrain the fascist drive for power.

IOF soldiers arrest seven Gazans in January including three minors
The Israeli Attorney General attempts to quash Adalah’s petition to annul the racist Admissions Committee Law. “The law, passed by the Knesset in March 2011, allows small communities in Israel built on ‘state land’ (public land) to reject applicants who “do not suit the lifestyle and social fabric of the community.”‘
Anwar revealed as an imperialist friendly zionist stooge committed to Israel’s dupicitous ‘security’ hasbara, the cover it uses to justify its land theft and occupation

Saying No to CSIS: Dozens of groups launch campaign to not co-operate with Canadian spy agency
No, @WilliamJHague you can’t weasel out of the British Empire’s responsibility for its nepotism & imperialism in the ME