Two young Palestinian Israeli citizens who came second in an international Physics Competition in Warsaw are omitted conspicuously in a racist report on the winners in Israel Hayom. It is notable that of all the Israeli winners, only ONE won a prize in the 24th European Union Contest for Young Scientists, and it was the Palestinian Israeli, Alfarook Abu Alhassan, who won the European X-Ray Free-Electron Laser Facility GmbH Prize.

*Even when you excel and you are an Arab, you remain invisible.

* Israel came first in an international physics competition, and it is trying to reach the same benchmark in racism.

On 20 September 2012 Israel Hayom published an article under the headline Quantum of success. It highlighted the success of the Israeli delegation from Ilan Ramon Centre at Ben-Gurion University in a competition held at the Institute of Physics in Warsaw.

The article contained the names of the winners, but not all of them…

It mentioned the first prize winner (Yuval Katznelson) and one of third prize winners (May Alon). The article quotes Professor Victor Malamud, head of the Ilan Ramon Centre at BGU, which coordinates efforts for the competition as saying that “We succeeded in showing the world the potential of the Jewish mind.”

On the surface, a cause for Jewish pride, indeed..

But what about the second place getter in the competition? The two second place winners, Magd Alfrawona and Alfarook Abu Alhassan were not mentioned at all. Probably because they don’t have a Jewish mind, or because they are Arabs …

The conclusion is inescapable, instead of being proud of all those who represented the country and impel them further forward, there is a very clear delineation between the Arab and Jewish participants. This is not all that far from our reality which is full of physical and virtual fences marking the separation between the two peoples.

This statement is racist for several reasons: it ignores some of the delegation’s winners, solely because cultural/social/national differences. This statement tries to establish the superiority of some participants over others on the sole basis of their national affiliation. In addition to all this, the article tries to obliterate the Arab presence in the delegation, and their success. This is despite the writers being aware of a different picture being presented on the university’s English-language website (there the two Arab winners are mentioned, and they also appear in the team photo published in the newspaper).

It is a pity that a lecturer in such a distinguished university professor chose to speak in such a racist fashion as he died. We hope he’ll get his comeuppance when the university launches an inquiry and takes disciplinary proceedings against him, and those responsible for this letdown. 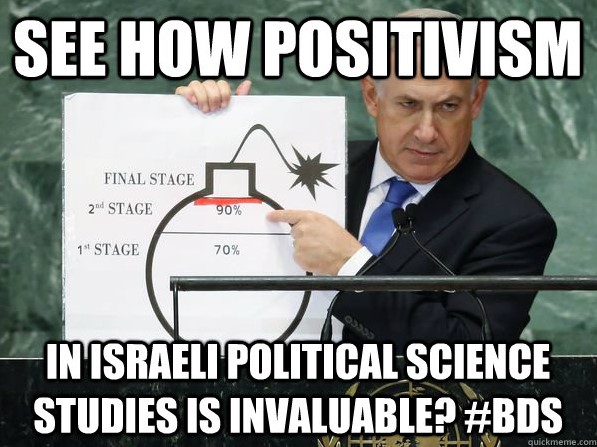 The French Political Science Association: A sanction that appears to be based on political grounds
Ha’aretz editorial: CHE’s recommendation stems from desire to punish faculty who dared offer their students a critical viewpoint
Netanyahu’s Likud party and its nationalist ally, Yisrael Beiteinu, have been cracking down on dissenters for months. It would seem that cowing the academy is one of their objectives. Of the current academic situation in Israel, Lustick told me, “there’s a real witch-hunt.”