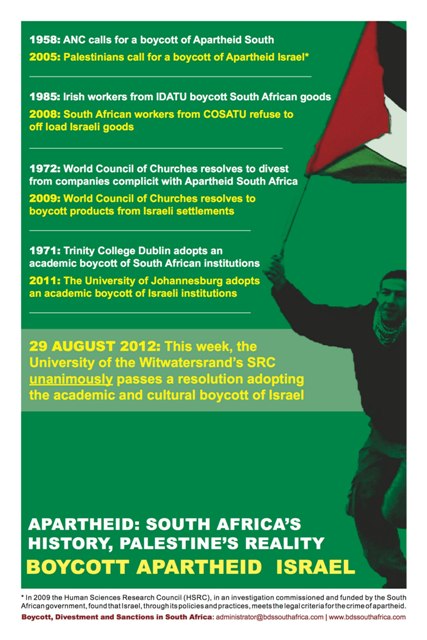 Don’t Play Apartheid Israel [DPAI] would like to extend our warmest congratulations to the Student Representative Council [SRC] of the University of the Witwatersrand on its unanimous principled resolution to support boycott, divestment and sanctions of Israel. This is an immense breakthrough which will immeasurably strengthen the global boycott of apartheid Israel. The resolution states that the University will “not participate in any form of cultural or academic collaboration or joint projects with Israeli institutions and will not provide support to Israeli cultural or academic institutions”.

We recognise that the SRC may come under significant pressure for its embrace of the Palestinian call for BDS, and wish to extend our support in firm solidarity. We look toward the day when Palestinian people have attained their just rights and freedom.

Don’t Play Apartheid Israel (DPAI) is a group of over 900 members which seeks to inform musicians of the Palestinian call to boycott Israel, and the extent to which their decision to play in the apartheid state will be instrumentalized – against their will – as propaganda for the maintenance of a horrifying status quo in Israel/Palestine: that is a brutal, decades-long occupation, ongoing ethnic cleansing, continual land theft, passing of over 20 racist laws within Israel/’48, and the crackdown on human rights groups. We represent over 900 members from around the globe who believe that it is essential for musicians & other artists to heed the call of the PACBI, and join in the boycott of Israel.

Calls for cultural and academic boycotts of Israel are echoing similar calls against South Africa until the end of Apartheid.