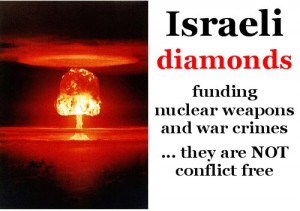 Please help raise awareness about a very important Kimberley Process meeting to be held in Washington from June 4-7th. You can email, tweet and phone politicians asking that the Australian representative at this meeting calls for a ban on trade in blood diamonds from Israel that fund war crimes, trade which the Kimberley Process should prohibit.

The sentencing of the blood diamond-funded former Liberian President, Charles Taylor, for war crimes and crimes against humanity will take place on 30th May. Together with the Kimberley Process (KP) meeting in Washington shortly after, there’s sure to be a lot more media reports about blood diamonds and so there’s an opportunity to push the issue of Israeli blood diamonds into the media spotlight once again.

Your government will have a seat at the KP table. It is important that you voice your concerns about the trade in diamonds from Israel that fund war crimes and crimes against humanity but which evade the human rights strictures of the Kimberley Process and are sold worldwide labelled as conflict-free. NGOs are seeking to have cut and polished diamonds included in the remit of the KP but the vested interests are resisting any such move which would pose a serious threat to Israel’s burgeoning diamond industry and the entire Israeli economy. Even though the KP refuses to include cut and polished diamonds it’s important to raise the issue and expose the double standards in the Kimberley Process which is designed to protect the rich an powerful beneficiaries of the diamond trade while Palestinians hunger and die under Israel’s diamond-funded hegemony.

Please take a few moments to contact your political representatives and ask them to raise this issue in parliament and with the government.

As the time frame for action is quite narrow it is important to act as soon as possible. You can find contact details for your local MP here – http://australia.gov.au/directories/contact-parliament

Another promising development is the action by solidarity activists in Italy who are planning an Israeli blood diamond demonstration in Vicenza next Monday to coincide with a meeting there of the World Diamond Council that will be attended by all the movers and shakers in the global diamond industry.

For more information about Israeli blood diamonds and the campaign to stop them, visit here.

Below is a draft letter which can be used or adapted and sent to politicians about the issue. Please help the monitoring of the uptake on this action and BCC emails.

The conviction of former Liberian President Charles Taylor by the International Criminal Court for crimes against humanity has again cast the spotlight on the trade in blood diamonds. It is a timely reminder of the urgent need for reform of the Kimberly Process definition of a “conflict diamond” which presently only applies to rough diamonds that fund rebel movements and not to diamonds that fund government forces guilty of war crimes.

Last year the Kimberley Process allowed the export of blood-tainted diamonds from Zimbabwe where government forces stand accused of serious human rights violations. Human rights organisations wanted the definition of a “conflict diamond” broadened to take account of diamonds that fund rogue governments guilty of human rights violations but the KP failed to act and the diamonds from Zimbabwe were allowed to contaminate the global market. As a result, Global Witness, a founding member of the KP, withdrew last December stating “most consumers still cannot be sure where their diamonds come from, nor whether they are financing armed violence or abusive regimes”. Other human rights organisations have indicated that they will also withdraw from the KP unless meaningful reform of the definition of a “conflict diamond”, accompanied by the inclusion of the cutting and polishing sector, is agreed this year.

Israel, a member of the KP, stands accused by the UN Human Rights Council of serious war crimes and possible crimes against humanity following the 2008/2009 assault on Gaza that left over 1400 people dead including more than 300 children;

The UN Human Rights Council investigation of the Israeli attacks on the humanitarian aid flotilla (including MV Mavi Marmara), bound for Gaza on 31 May 2010 during which nine people were murdered and many others injured, found that there was clear evidence to support prosecutions of the following crimes within the terms of article 147 of the Fourth Geneva Convention: – Willful killing; Torture or inhuman treatment; Willfully causing great suffering or serious injury to body or health.

Considering that evidence presented to the London session of the Russell Tribunal on Palestine in November 2010 indicated that the Israeli diamond industry contributes about $1 billion annually to the Israeli military and security industries and that every time somebody buys a diamond that was exported from Israel some of that money ends up in the Israeli military;

Diamonds exported from Israel are therefore helping to fund gross human rights violations in Palestine as well as Israel’s clandestine nuclear weapons programme which it refuses the International Atomic Energy Agency permission to supervise or inspect.

Given these facts, I call on you to ask the government to instruct the Australian representative to the Kimberley Process to call for:

the Kimberley Process definition of a “conflict diamond” to be broadened to include all diamonds that fund gross human rights violations by any group or government;
a ban on the export of diamonds from Israel until such time as it respects the human rights of the Palestinian people under its control and abides by the international human rights law and humanitarian law.