In the wake of Irish traditional band Dervish’s cancellation of their dates in apartheid Israel, an astonishing campaign of lies and smears has played out in the Irish press- mainly in the Sunday Independent – and has had substantial and deeply worrying contributions from the Irish Minister for Justice and Defence, Alan Shatter.

When the Dervish dates in Israel became known to Palestine solidarity campaigners, DPAI set up a Facebook page, Dervish, Don’t Bring Your Travelling Show to Apartheid Israel, the Ireland-Palestine Solidarity Campaign (IPSC) wrote an open letter to the group, musicians supportive of BDS contacted the band and people posted on the band’s Facebook page. There was no abuse of the band, no ‘venom’ directed at them (there never is), there was a concerted campaign to give Dervish information about the terrible situation of the Palestinian people, to tell them about their call for solidarity in the form of BDS and to ask them to join other artists of conscience in refusing to play in Israel.

When Dervish cancelled, stating that they had been unaware of the cultural boycott of Israel: “At the time we agreed to these performances we were unaware there was a cultural boycott in place. We now feel that we do not wish to break this boycott. Our decision to withdraw from the concerts reflects our wish to neither endorse nor criticise anyone’s political views in this situation.” (Official Facebook page here), they were congratulated by the IPSC, DPAI, who wrote a letter of thanks, and many other supporters of the Palestinian people. The cancellation, of course, sparked the usual hate-filled posts from zionists and that’s where the ‘venom’ referred to in Dervish’s second statement came from.

Here are some examples of the positive statements made by BDS advocates:

“Respect and thanks for having the courage to refuse breaching the Palestinian call for boycott.”

Raymond Deane, Cultural Liaison Officer IPSC: “Dervish – I salute you for this courageous and morally correct decision. You will now be subject to massive defamation from Zionists and their fellow-travellers – you should see this as proof that you have made the correct decision, because it will reveal to you the viciousness and mendacity of Israel’s apologists.”

Zoe Lawlor: “Well done and thanks Dervish. You have joined a growing list of artists refusing to play for apartheid. You are on the right side of history and with the Palestinian people in their struggle for justice. Respect.” 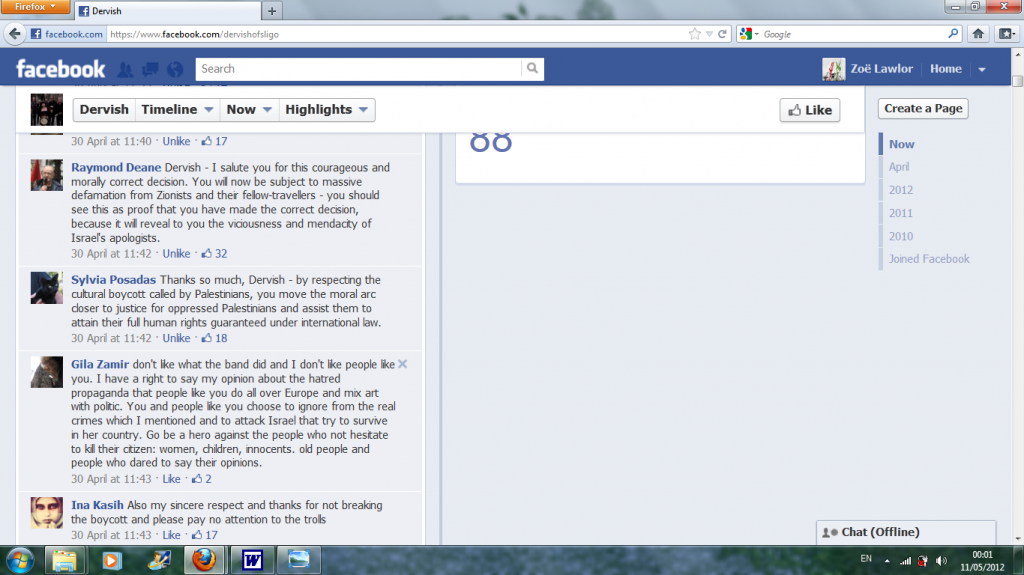 “Thank you so much for refusing to support apartheid, history will remember artists like you. It is not always easy to do what is right. You are not alone, Nelson Mandela and many other peacemakers have said they themselves cannot feel free until there is an end to the brutal occupation and colonisation of Palestine.”

“This cannot have been an easy time for any of you. I hope one day you play Tel Aviv again with laughter and lightness and when this difficult week is just a dim bad memory. Thank you for not breaking the boycott… you paid a much higher price than most people ever have to. Respect !”

Some of the negative comments from supporters of Israeli apartheid:

“LMAO at this band attempting to sit on the fence while simultaniously boycotting a country surrounded by a bunch of Arabs that want to see it destroyed. Israel has been at war with the savages that refuse to tollerate Israels existence, yet the world is siding with the intollerant Muslims while demonizing Israel. The world turning against Israel, now was this not prophesied to happen. Everything is right on schedule thanks for doing your part in satans agenda you bunch of lunatics.”

“Congratulations! You are now part of a cynical negative political campaign promoting nothing but hatred. Shame on you.”

“let it be kbown that i have heard that the bds uses some pretty shady tactics to threaten artists to cancel shows in the name of peace. oddly, much like hamas.”

“Wow Dervish! UNLIKE! Once again proving how anti-Semitic the Irish are! Please do not come back to Montana, we prefer real world music! I will do my best Not to promote you at every opportunity. Booooo Hisssss…get off the Stage!!!”

” white liberals. jeeeesus. take care all. i dont even like Dervish”

“For shame, Dervish, for so ignorantly taking a side in this misguided movement. Your statement that “Our decision to withdraw from the concerts reflects our wish to neither endorse nor criticise anyone’s political views in this situation” is so absurd as to be comical. How, by joining a boycott, are you not endorsing a position? Way to land on the wrong side of history. Pathetic.”

“this is the day the nusic of dervish die for me”

The posts above are representative of the reaction on the Dervish page and absolutely refute any smears against IPSC members and those standing in solidarity with the Palestinian people. They make Alan Shatter’s press release of 4th May look even more baseless when the evidence is there for anyone to see on the Internet. Instead of doing this and working on the basis of factual information, Shatter instead chose to write an outrageous press release accusing the IPSC (erroneously referred to as the IPSG) of “cyber bullying” and infringing on Irish citizens’ rights to travel. He also makes a link between Al Quaeda and the IPSC that is so ridiculous as to be laughable, except that this is a minister, in our government, paid for by our taxes, charged with upholding justice and protecting Irish citizens, IPSC members included. The statement defies belief and has been reported as fact in Irish newspapers, their journalists too lazy to actually investigate and report properly and accurately. The Irish Times and Independent are guilty of this and also claiming that there is no ‘official’ boycott of Israel, thereby displaying the usual orientalism of completely ignoring Palestinian voices. Meanwhile Shatter employs the all too familiar and predictable zionist tactic of mentioning Syria, demonstrating a profound inability to comprehend the simple tenet that the Ireland-Palestine Solidarity Campaign is just that, a campaign in solidarity with PALESTINE, not Syria…… rocket science and all that. By the way, his concern for Syria doesn’t extend to the Golan Heights….

While Palestinians live under occupation, oppression, siege, are frequent victims of Israeli war crimes and while over 2,000 of them are currently on hunger strike to protest the illegal practice of detention without charge or trial, Shatter has been silent. Could it be that the Minister for Justice has no sense of justice when it comes to Palestinians?

In the wake of the Dervish cancellation, there has been much hysteria in the Irish media, accompanied by increasingly poor standards of journalism – even journalists with no apparent pro-Israel agenda have managed to mischaracterise both BDS and the campaign around the Dervish tour. Above all else, they keep spectacularly missing the bloody point. Palestinians living through their 64th year of brutal occupation, betrayed by the so-called international community, have called for a comprehensive boycott of Israel – that’s their call, that’s one of the means by which they choose to resist the apartheid imposed on them. Solidarity groups support that call, that’s what solidarity means.

Raymond Deane, IPSC Cultural Liaison Officer, was interviewed by the ignorant and boorish Marc Colman on Newstalk radio (about 20 mins in) and subjected to personal attack by the uninformed and rude Eamon Delaney, both of whom trotted out the usual zionist cliches, familiar to any observer of the defenders of Israel and rehearsed multiple times on this blog. He was ‘accused’ of calling for the boycott himself, then it was claimed that it was a Hamas led boycott. Delaney even said that Israel shouldn’t be ‘picked on’ as it is a country made up of people who are white and European originally, very telling.

The thing about democracy is that, of course, everyone is entitled to an opinion but let’s make them based on knowledge not empty rhetoric or lazy thinking. If you’re going to be against the cultural boycott, at least be informed as to where it came from, what it entails, how it fits into the struggle, the truth about Israel’s constant repression of Palestinian culture. What we have seen here is the usual knee-jerk reaction of Israel’s supporters, who often don’t know what it is exactly they are against, all they know is that they will defend the apartheid state no matter what.

As with all the BDS campaigns I have seen, there is no harrassment of those who would cross the picket line, there is however a sincere and very urgent campaign to educate them and try to persuade them not to endorse apartheid. This is what campaigning for justice and human rights looks like, it’s what it looked like in the campaign agaisnt South African apartheid. That the Irish Minister for Justice either cannot or refuses to see this is disturbing. That journalists can produce copy based on lies, inaccuracies and mistruths is worrying.

This is the IPSC’s official response to Minister Shatter.

The Palestinian led cultural boycott is growing every year, more and more artists are choosing not to perform for apartheid Israel. It is an honourable campaign and one I am proud to be part of, as should all involved especially the artists who make the decision to join.

BDS until apartheid ends – if you don’t like it, then let’s see your work to end injustice.

All comments made prior to Dervish’s cancellation on their page: