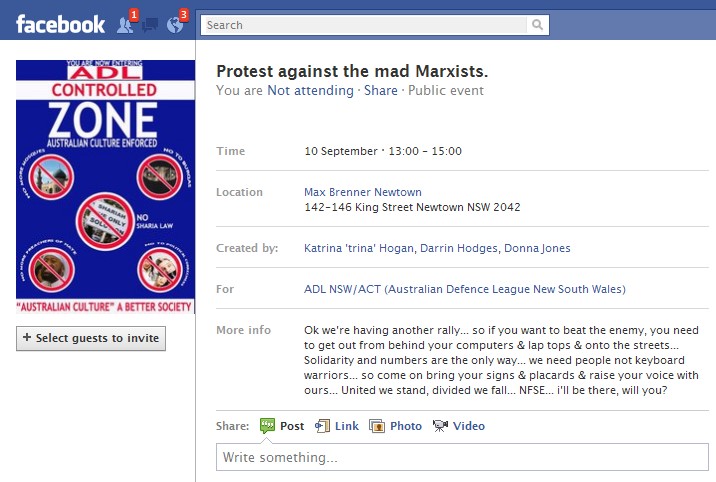 The NSW leader of the APP, Darrin Hodges, is an ex-Stormfront forum member who once opined that “[Hitler] laid a foundation that we should build on” but who now identifies The Muslim rather than The Jew as being Public Enemy #1. Martin Brennan, the former leader of the ADL, was last month deported back to England as an illegal immigrant but looks forward to joining the EDL as they attempt to march through Tower Hamlets on September 3 (slight problem being police have banned the march). One of Brennan’s closest supporters was another foreigner named Roberta Moore, former leader of the EDL’s ‘Jewish Division’: on the one hand, Moore was unhappy with the number of ‘Nazis’ belonging to the group; on the other hand, the EDL was unhappy with Moore’s cultivating links with the ‘Jewish Task Force’.

Roberta Moore has a cosy relationship with the Australian far right.

Boycott, divestment and sanctions are the principled non-violent method chosen by Palestinian people to oppose the illegal Israel Occupation, to end Israel’s apartheid, for equal rights and the recognition of Palestinian people’s rights to return to their lands. BDS was one of the primary methods used by the anti-apartheid movement to end white South African apartheid.

Recently, Zionists and white supremacists including from the Australian Patriotic Defence Movement (APDM), a fascist organistion here in Australia, joined forces to oppose a BDS protest near Max Brenner in Brisbane. Birds of a feather protest together.

While the Fairfax press is quick to smear BDS falsely as anti-semitic, it neglects to examine the far right white supremacist anti-semites who protest alongside the their zionist counterparts. White supremacists who support Israel’s apartheid regime hate Arabs only slightly less than they hate Jews. The alliance between the odd bedfellows is an opportunistic, twisted marriage of convenience.

“People are angry, but they can’t explain why.” I’d suggest someone made a similar mash up of the Cronulla times 50 loon over at Slack Bastard’s, except his voice sounds more like a jackhammer than anything remotely associate with music. Maybe I need to listen to some TISM for inspiration. And the Brechtian further incarnation – Root!

BDS protesters say they won’t be silenced, intimidated
We, Israeli citizens, members of Boycott! Supporting the Palestinian BDS Call from Within, would like to express our solidarity with the numerous Australians who are involved in the burgeoning BDS campaign in Australia.
BOYCOTT! Newsletter #64

These two fallacies play directly into the Zionist regimes’ interminable ‘security’ hasbara, which is code for zionist expansionism and disposal of its surplus ‘sub-human’ Palestinians. Zionism treats Palestinians as sub-human, in the same way as white supremacists regard Jews. Zionism resonates well with the sense of entitlement other settler colonial entities have over surplus sub-humans in their colonies, often including the way these other settler colonial entities have treated Jews.

The AJDS releases a despicable document in which the most shameful thing besides trivialising the holocaust, impugning bds activists as antisemites and nazi supporters and slandering Australians for Palestine is it makes no mention of the white supremacist far right nationalists aligning directly with anti-BDS zionists against legitimate protest by Palestinians and supporters for rights. So much for ‘democratic’. Apparently, the Palestinian protest isn’t polite enough for these apologists for apartheid.

Why the J14 protest won’t cause the Israeli govt to change a damn thing
Israeli warplanes bomb Gaza Strip despite a new ceasefire agreement between Tel Aviv and the Hamas government in charge of the territory.
Leak Offers Look at Efforts by U.S. to Spy on Israel
PRESS RELEASE FROM BEETHOVIANS FOR BOYCOTTING ISRAEL
Wadi Ara next in line for Judaization project
‘Racist & inaccurate’ : Captain Israel – ‘Brand Israel on steroids’

Twitterzens of the World Unite!