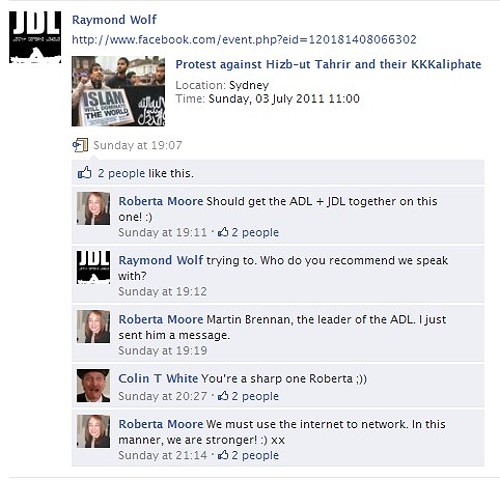 ‘Ms Moore had attempted to co-ordinate her efforts with those of the far-right American Jewish Task Force, whose leader Victor Vancier has been imprisoned for terrorism offences. The move, in February, was heavily criticised by the EDL leadership.

In a statement which she posted on Facebook, the Brazilian-born Ms Moore said she had been offered work on “an international level” elsewhere and so had decided to step down from the Jewish Division.’

Ms Moore came into conflict with the EDL recently – the leadership of the English Defence League “has distanced itself from the group’s Jewish Division, because of its partnership with the far-right American group Jewish Task Force”.

The Australian Jewish Defence League has a very spotty history. JDL groups arose from and maintain an association with the Jewish extremist Kahane movement.

Dr Fintan Lane, co-ordinator of Irish Ship to Gaza, said the damage to the propeller shaft was a potentially murderous act.

If pressure had been put on the shaft, which was weakened by a piece gouged out, it could have snapped, damaged the engine room and flooded the boat at sea, he said.

“This wasn’t designed to stop the ship from leaving its berth. Instead it was intended that the fatal damage to the ship would occur while she was at sea and would have resulted in the deaths of several of those on board,” he said. “This was a potentially murderous act.”The damage is said to be identical to damage suffered by the Greek/Swedish ship, the Juliano, in recent days.

Dr Lane demanded that the Irish and European governments condemn the attacks despite Taoiseach Enda Kenny warning the Irish human rights activists against trying to break the blockade.

“Israel has no right to interdict the flotilla and even less right to carry out attacks against vessels in Greek and Turkish ports,” he said.

Israel has not commented on the allegations.

We Demand an Independent Investigation into the Sabotage of the MV Saoirse
Irish Ship to Gaza SABOTAGED by Israeli agents: Protest & sit in today
Irish ship will not sail to Gaza after ‘sabotage’

Mr Lane said that, due to the extent of the damage, the MV Saoirse would not be in a position to sail, adding that just six of the 20-plus crew who had been due to set sail would be able to take part in the flotilla by joining an Italian-based vessel today.

Those passengers who intend to board the Italian vessel include Mr Lane, former Munster and Ireland rugby player Trevor Hogan, Socialist Party MEP Paul Murphy, Libyan-born Irish citizen Hussein Hamed, Derry-based Sinn Féin councillor Gerry MacLochlainn, and Zoe Lawlor, who teaches at the University of Limerick and is a member of the national committee of the Ireland Palestine Solidarity Campaign.

Hasbaroids are out in droves – here’s a partial list of propaganda sources and outputs:

Jerusalem Center – looks like they are attempting to cast the Freedom Flotilla 2 as engineered by Khhhhhammmmasssss and IISSSSSMMMM
Stand With Us launches website against new flotilla
Peace Now, which shills for ziolites

Then, watch Ali Abunimah defumigates the hasbara in a lively debate with UNRWA’s Chris Gunness and Jerusalem Post’s Yaacov Katz.

One quarter of the Freedom Flotilla 2 humanitarians are Jewish. By threatening attack of the Flotilla 2 , zionists and their white supremacist allies demonstrate their intrinsic anti-semitism.

Hysteria, ‘hasbara’ and the flotilla

Lacking in credibility? You don’t say! I’m still waiting for the IDF to release all the videos confiscated from the Mavi Marmara – not just those that show the people aboard beating the commandos sliding down the ropes, but the stuff that happened before and after, too, especially the footage of the commandos killing those nine people.

Why won’t the IDF let us see that? Why do “senior officials in Jerusalem” make up scare stories about the flotilla? Why does Benny Gantz try to portray Gaza as a horn of plenty? Why does Israel twist and distort and cherrypick its way through the truth about Freedom Flotilla 1, Freedom Flotilla 2, Operation Cast Lead and everything else that has to do with its treatment of Palestinians?

Israel passes draft law requiring Palestinians to pay for their own home demolitions
Jello Biafra cancels his Tel Aviv gig
The State of the Struggle: Revolution and Counter-revolution in the Arab World – on how Middle Eastern and North African civil society movements have initiated, expanded, and given peoples across the region the motivation to rise up to join this “Arab Spring.”
Basketball legend Kareem Abdul-Jabbar cancels Israel appearance in a slam-dunk for BDS
IOF troops fire at citizens homes south of Gaza
Made before his death, this film follows human rights activist Vittorio Arrigoni as he tries to help the people of Gaza.
An Israeli trap for Britain : In arresting Sheikh Raed Salah, the UK authorities support the persecution of Arab citizens of Israel
From UK prison, Palestinian leader Sheikh Raed Salah says he will fight deportation
Australian surgeons operate in Gaza
‘Listen, I can’t play in Israel when the Palestinians have no access to the same fundamental benefits that the Israelis do.’ I think the best approach is to boycott a government that seems hell-bent on very destructive policies.

The new plan was developed by a committee headed by MK Danny Danon (Likud), head of the Absorption Committee, who presented the plan to Australian parliamentarians who were visiting the Knesset. The leading parliamentarian who is leading the efforts from the Australian side is MP Michael Danby, who heads one of the relevant committees there and is considered very close to Israel.

The Australian representatives agreed to push the initiative and are scheduled to return to Australia this weekend to discuss the Israeli proposal. “The place for refugees from Africa is not in Israel,” said MK Danon. “If we don’t deal with this problem, we will find ourselves in a few years with a large Muslim refugeecommunity living among us. The proposal we’ve made would give a humanitarian answer [to the problem] without harming Israel’s fabric of life

Blog Wars: Pamela Geller vs. Gates of Vienna and the EDL?

Leaks, sources and passing the salt

3 Replies to “What’s Next for Roberta?”