Outrageously, over the weekend apartheid Israel threatened journalists on board the Freedom Flotilla boats, who include two Israeli journalists, Amira Hass and Joseph Dana. However, apparently Nutanyahoo is backpedalling Israel has now dropped this threat.

The Israeli government has dropped a threat to issue lengthy deportation orders against journalists aboard a Gaza-bound flotilla.

Prime Minister Benjamin Netanyahu said Monday that he ordered authorities to find a formula for the reporters if they are on a flotilla that violates Israel’s entry laws.
…
The Foreign Press Association, which represents hundreds of journalists working for international news organizations in Israel and the Palestinian territories, condemned the Israeli decision and urged the government to cancel the order.

“The government’s threat to punish journalists covering the Gaza flotilla sends a chilling message to the international media and raises serious questions about Israel’s commitment to freedom of the press,” the FPA said in a statement.

The association’s lawyer, Gilead Sher, sent a letter to Helman demanding that the threat be rescinded.

“The state of Israel must make a clear distinction between those who carry out an action and those who cover it (as journalists),” Sher said in his note. Israel’s local journalists association also condemned the government’s letter. 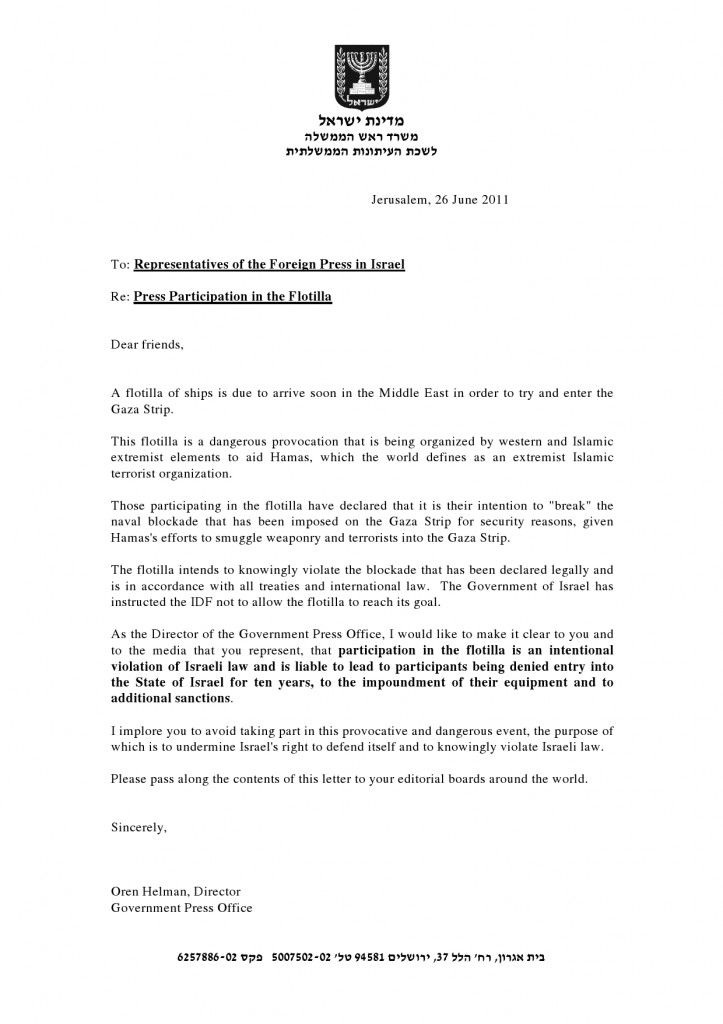 In another brilliant scoop, Max Blumenthal reveals that the anti-semitic crazed rightwing Christian Zionist Hagee and his loony minions are funding the Israel Law Center’s effort to stymy the flotilla.

Who is Shurat Hadin, and what is their agenda? According to the group’s website, Shurat Hadin is a Tel Aviv-based law center that specializes in lawsuits against “terrorists.” Its founder, Nitsana Darshan-Leitner, describes herself in her bio as a “human rights activist.”
….
I have discovered that a major donor to Shurat Hadin is the homophobic far-right Pastor John Hagee. In March 2010, I reported that Hagee appeared beside Prime Minister Benjamin Netanyahu at a major rally in Jerusalem to denounce the two state solution and announce the financial contributions he and his supporters were making to Israeli organizations. Among the organizations Hagee said he had bankrolled was Shurat Hadin.
…
As the researcher and reporter Bruce Wilson has documented, Hagee preaches that the Jewish Rothschild family controls the US economy through the Federal Reserve and conspires to attack the American middle class by devaluing the dollar. In his 2006 book Jerusalem Countdown, Hagee claimed that a lineage of “half-breed Jews,” descended from Esau and which included Adolf Hitler, have persecuted full-blooded Jews throughout history. Hagee prophesied that God intended to exterminate that “half-breed Jew” line.

It’s one thing for a foreign power to press the Greek government to delay our voyage with red tape. It is quite another thing for enemy agents to operate on Greek territory. It is high time for the international community to put their foot down and say: Enough!”

On Saturday, 25 June, the French boat, Dignity / Karama, left the port of l’ile Rousse in Corsica, France, to meet up with at least nine other vessels sailing to Gaza to challenge Israel’s illegal blockade. Israel’s best efforts to stop our boats at port, including pressure on governments, threats against insurance and communications companies, intimidation of human rights defenders, frivolous lawsuits and other underhanded tactics, have thusfar failed. The Freedom Flotilla has set sail.

Inequalities of wealth in Australia analysed Among the Melbourne Institute’s findings is that the ‘bottom half’ of Australia’s population owns less than 10 per cent of total household net worth, while the wealthiest 10 per cent owns 45 per cent. (This was in 2005, before the crash).
15 Mind-Blowing Facts About Wealth And Inequality In America