Once again, Israel uses its grotesquely disproportionate US funded weaponry to wantonly slaughter Palestinians. About 100 people were obliterated this time, including 19 children.

This is not a conflict between two equal forces. The most powerful army in the Middle East, backed by the world’s single remaining super-power, is daily using tanks, fighter planes, helicopters and gunships against the lightly-armed militias and overcrowded population of a small area whose people have lived under occupation and in poverty long before the present siege. 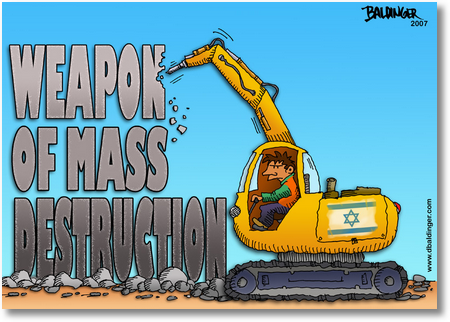 “We are justified in bombing Palestinian civilians including women and children because Palestinian fighters are using them as human shields.”

“Hey you mob, get your fighters to stop fighting us or we will kill you all, women and children included. And we will take more of your land, with any luck, all of it.”

Then, last week Israeli Deputy Defense Minister Matan Vilnai threatened the Palestinians with genocide, veering toward the real intentions above:

The more Qassam fire intensifies and the rockets reach a longer range, they will bring upon themselves a bigger shoah because we will use all our might to defend ourselves.

Shoah means Holocaust in Hebrew. It can also mean disaster – either way, Vilnai’s threat is repugnant and arrogant.

Thus does the racist oppressor state use innocent human lives as bargaining chips with the leaders of the Palestinian concentration camp inmates it has tormented for the past 60 years. Jonathan Swift would smile in recognition of their rhetoric.

Israel’s government seems incapable of realising that the more collective injustices it perpetrates against its hapless victims, the more rockets will come. Humans do not submit to oppressors committing heinous acts. They fight until the oppressor is vanquished or a peaceful solution found. With no hope, there is only despair, and nothing to lose by fighting back to the death if necessary. Yet Israel habitually does not recognise Palestinians as human at all, which perhaps explains why its leaders appear unable to grasp these simple truths.

the Israeli army was “intentionally and systematically targeting civilians” and criticised world powers for their muted response.

“Israel puts itself above the law because the international community is always silent,” he said.

“The Israeli army opens fire at everything in our area, including children and houses. There are injured children bleeding inside their houses,” Dardouna said.

“It’s very regrettable that what is happening is more than a holocaust,” Abbas told reporters in Ramallah.

“Children who are barely five-months old are being bombed by the Israeli army.”

“We tell the world to see with its own eyes and judge for itself what is happening and who is carrying out international terrorism.”

Perhaps it will be his offices struck next. Then Israel can joyfully proclaim as it has been wont to do in the past that it has noone with which to negotiate, conveniently placing the blame back on its miserable victims.

Barak no doubt is preparing the way to make support for the Zionist uber state and its abominable pogroms a central issue in the United Stupids election where Obama appears to have the lead at present. Barack may be forced to barrack for Barak and Israel’s acts of attrition, or face an uphill battle in the US election.

For peace to come to the Palestinian region, it is essential that the US is led by someone in step with the rest of the international community and who does not favour privileged Israel with its mansions and swimming pools over the needs of those whom it oppresses and from whom it has stolen and continues to steal, with the pallid, erroneous excuse that Israel is the only democracy of the region.