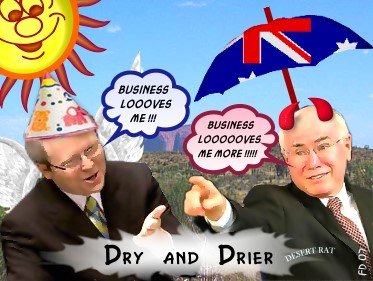 In a deceptively milquetoast budget reply speech, Kevvie cut the ground out from under any possible rodential pre-election spending spree with a ‘fiscally responsible, conservative’ demeanour. Declaring that there would be no new tax increases as a percentage of GDP, Rudd kept his iniatives to five main points, ostensibly to avoid predictable attacks of ‘where will the bucks come from to pay for them’ during the forthcoming election campaign and to focus the electorate on a short list of core promises.

Without firing broadsides at Howard’s beneficent budget bribes, Rudd correctly linked future productivity growth and low interest rates beyond the masking effects of the mining boom with education, “a core value of Labor for more than a century”, beginning with early childhood where Australia is ranked 32nd in investment in OECD countries. Productivity growth is ominously predicted by the government to be only 1.1% though the current decade.

“We are blessed,” said Uncle Kevvie. “The time to fix the roof is when the sun is still shining.” Though painfully cliched, his metaphorical allusion may resound well in the blue collar mortage belt, much of which may not feel so blessed by the fruits of the resource boom. With Rudd stating categorically that there is “no difference in a trade certificate and a university degree”, we are all tradespeople now.

Labor’s projected funding of trades training in secondary schools is a canny, appealing policy both for business, which is crying out for more skilled tradesmen, and Australian workers, many of whose kids aren’t bright enough to make it to uni, which is where Howard’s education policies are primarily directed. Howard proposed funding only 3 new tech colleges across Australia – a demonstrably weak response to industry requirements. The unstated subtext is that business has been importing foreign skilled workers to the detriment of our own youth. Further, an ALP federal government will have the ability to coordinate the implementation of its trades and Asian language initiatives with the all-Labor State governments.

Noting that currently there are 540,000 young people not in full time learning or work, Rudd announced further education initiatives including $84m over 4 years for on the job training for 20 weeks a year for year 9 – 12 students, improving school retention rates to year 12 from the present 75% to 85% in 2015 and 95% by 2020, thus earning Australia’s economy an extra estimated $9b at the 90% mark, and a uniform national curriculum for english, history, maths and science to facilitate mobility across the states.

Addressing industry directly, Rudd indicated Labor would maintain the absolute independence of the reserve bank and streamline regulatory arrangements – “no new regulation unless an existing an regulation is withdrawn.” Furthermore, business would have the right to charge Commonwealth departments on late payments, use an optional national superannuation clearinghouse, and for the finance industry, a simple standard disclosure form for financial service products. To attract investment from the Asian funds management industry (already swanning it with the removal of CGT on foreign share investments), Uncle Kevvie promised to halve withholding tax.

After skimming over the continued need for national security via vigilance, Rudd next reiterated the contentious yet much needed ALP broadband initiative for a $4.7b investment in partnership with private business for a state of the art fibre to the node 12mb/sec network – no surprises there.

Rudd’s fourth major point was climate change. Linking the economic cost to Australia with a failure to act now, he repeated Labor’s intention to ratify the Kyoto Protocol, reducing greenhouse gases by 60%, establishing a clean coal fund (CXY could benefit here), low interest loans for home solutions and boosting the use of renewables.

Water security would be addressed with low interest loans for homeowner solutions and improving water security for local communities. Noting that “30% of water is lost from leaks and burst water mains”, Rudd envisaged a National fund for fixing leaks across Australia to match local government contributions.

“That’s why we’ve committed to funding the Goldfields Superpipe for Bendigo and Ballarat, the Geelong Shell Refinery water recycling project and other major urban water projects.”

Lastly, Rudd presaged changes to the disastrous Howard Workslavery laws which are widely perceived to have gone too far – for Rudd “the fair go has a future”, there must be a “balance between fairness and flexibility”, and Australians must be “united not divided”.

All in all, a bland, unthreatening presentation, and one in which the rodent will be scrabbling to gain a claw hold for his wedgies.