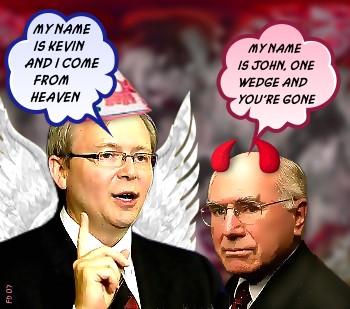 Shamelessly purloined from Sir Henry Casingbrooke, this joke is too funny not to conserve beyond the fringe.

While on his morning walk, Prime Minister John Howard falls over, has a heart attack and dies because the accident and emergency ward at his nearest hospital is too understaffed to treat him in time.

So his soul arrives in Heaven and he is met by Saint Peter at the Pearly Gates.

“Welcome to Heaven,” says Saint Peter, â€œBefore you settle in, it seems there is a problem. We seldom see a Liberal around these parts, so weâ€™re not sure what to do with you.â€

â€œIâ€™d like to just let you in, but I have orders from God Himself. He says that since the implementation of his new HEAVENCHOICES policy, you have to spend one day in Hell and one day in Heaven. Then you must choose where youâ€™ll live for eternity.â€

â€œBut Iâ€™ve already made up my mind. I want to be in Heaven,â€ replies Howard.

â€œIâ€™m sorry â€¦ but we have our rules,â€ Peter interjects. And, with that, St. Peter escorts him to a lift and he goes down, down, down â€¦ all the way to Hell.

The doors open and he finds himself in the middle of a lush golf course. The sun is shining in a cloudless sky. The temperature is a perfect 22C degrees. In the distance is a beautiful club-house.

Standing in front of it is Bob Menzies and thousands of other Liberals luminaries who had helped him out over the years â€”Harold Holt, John Gorton, Bill McMahon, Billy Snedden, etc. And everyone is laughing, happy, and casually but expensively dressed.

They run to greet him, and to reminisce about the good times they had getting rich at the expense of â€™suckers and peasants.â€™ They play a friendly game of golf and then dine on lobster and caviar.

The Devil himself comes up to Howard with a single malt, â€œHave a drink John and relax!â€

â€œThis is Hell, son. You can drink and eat all you want and not worry and it just gets better from there!â€

Howard takes the drink and finds himself liking the Devil, who he thinks is a really very friendly cove who tells amusing anecdotes like and pulls hilarious nasty pranks, kind of like the ones the Liberals pulled with the GST and the Free Trade Agreement promises.

They are having such a great time that, before he realises it, itâ€™s time to go.

Everyone gives him a big hug and waves as Howard steps into the lift and heads upward.

When the elevator door reopens, he is in Heaven again and Saint Peter is waiting for him. â€œNow itâ€™s time to visit Heaven,â€ the old man says, opening the gate.

So for 24 hours Howard is made to hang out with a bunch of honest, good-natured people who enjoy each otherâ€™s company, talk about things other than money and treat each other decently. Not a nasty prank or short-arse joke among them.

No fancy country clubs here and, while the food tastes great, itâ€™s not caviar or lobster. And these people are all poor. He doesnâ€™t see anybody he knows and he isnâ€™t even treated like someone special.

â€œWhoa,â€ he says uncomfortably to himself. â€œBob Menzies never prepared me for this!â€

The day done, Saint Peter returns and says, â€œWell, youâ€™ve spent a day in Hell and a day in Heaven. Now choose where you want to live for eternity.â€

With the â€˜Deal or No Dealâ€™ theme playing softly in the background, Howard reflects for a minute . then answers: â€œWell, I would never have thought Iâ€™d say this â€” I mean, Heaven has been delightful and all â€” but I really think I belong in Hell with my friends.â€

So Saint Peter escorts him to the lift again and he goes down, down, down, all the way to Hell.

The doors of the elevator open and he is in the middle of a barren scorched earth covered with garbage and toxic industrial wasteland.

He is horrified to see all of his friends, dressed in rags and chained together. They are groaning and moaning in pain, faces and hands black with tar.

The Devil comes over to Howard and puts an arm around his shoulder. â€œI donâ€™t understand,â€ stammers a shocked Howard, â€œYesterday I was here and there was a golf course and a club-house and we ate lobster and caviar and drank single malt whisky. We lazed around and had a great time. Now thereâ€™s just a wasteland full of garbage and everybody looks miserable!â€

The Devil looks at him, smiles slyly and purrs, “Yesterday we were campaigning; today you voted for us!”