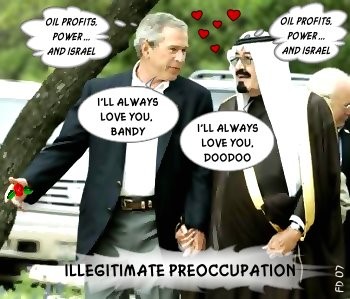 At a two day summit in Riyadh aimed at pushing the Arab peace plan for Israel and Palestine, in a significant about face, the Sauds have rounded on the incompetent Coalition of the Gobbling warmongers.

Saudi King Abdullah, whose country is a close US ally, slammed Wednesday the “illegitimate foreign occupation” of Iraq in an opening speech to the annual Arab summit in Riyadh.

“In beloved Iraq, blood is being shed among brothers in the shadow of an illegitimate foreign occupation, and ugly sectarianism threatens civil war,” Abdullah said.

He also said that Arab nations, which are planning to revive a five-year-old Middle East peace plan at the summit, would not allow any foreign force to decide the future of the region.

What will be the reaction of the United States to such impudence? The original neocon plan called for the transformation of the middle east using Saudia as a pivot to democratise the region, with Egypt the eventual prize. Saudia is thus throwing a big spanner in the works by projecting its power and biting the hand that feeds it.

Saudi leaders are keen to promote the beleaguered Sunni cause in Iraq, which is presently endangered by overwhelming Shite power, including within the Shite dominated and United States’ backed puppet Iraqi government. The summit is expected to adopt a resolution calling for more power sharing with the former Sunni elite.

The Iraqi government has immediately dug in its heels, telling the Sauds they

did not need a “diktat” from the Arabs on how to amend its constitution and boost national reconciliation.

The Arab League wants to resume negotiations with Israhell, offering normalisation for acceptance of terms including withdrawal of all land occupied in 1967, the creation of a Palestinian state and return of Palestinian refugees.

Despite mutterings from Israeli officials about the Arab plan being a “starting point”, it is likely that rightwing Israeli zealots who, with the support of Doodoo bush and the Israel first lobby, will insist on retaining lands they have stolen through warfare. Acceptance of the right of return of refugees driven from their land in the Nakba catastrophe in 1948 is seen by the Israeli rightwing, religious nuts and fanatical settler movement as tantamount to destruction of their pariah apartheid state, despite the clear legal basis for such return under international law.

At the summit, Hamas is calling for an end to the western boycott of Palestine and is seeking financial support from the Arab states to the tune of $2.7b.

not to expect any further diplomatic overtures, telling a British newspaper: “What we have the power to do in the Arab world, we think we have done.”

And that, my friends, will suit the Netanyahooites and religious zealots down to the ground, to the detriment of Israel’s future security and prosperity.

4 Replies to “Saudi King lectures the Coalition of the Gobbling”