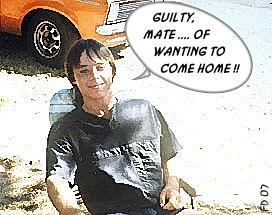 According to David Hicks’ dad, Terry, his son has taken the go home card offered by his jailers, pleading guilty to providing material support to terrorists “because he was desperate to escape five years of ‘hell’ in Guantanamo Bay” and return to Whorestralia.

During his Kafkesque incarceration, whilst awaiting charges to be concocted by the United Stupids military kangaroo court, Hicks has maintained his innocence.

He decided to plead guilty yesterday to one count of material support of terrorism at a late-night, unscheduled hearing of the military commission, after an apparent deal between his defence team and the prosecution.

It’s likely he will serve any sentence in a maximum security prison in South Asstralia and be home before the federal election.

The reprehensible rodent characteristically applauded Hicks’ plea as “a vindication of the military commission process”, whilst to his credit, Nat’s renegade senator Barnaby Joyce commented

“The only thing that is guilty here is the judicial process under which he was being tried.”

despite being told as the aircraft was on the tarmac that Hicks was about to plead guilty. Mr Hicks had flown in earlier in the day and spent several hours with his son. They both cried. It was their first contact in more than two years.

Terry Hicks said: “He knows that John Howard and the Government is frightened that he will do something when he gets back. What the hell is he going to do? He did nothing in Afghanistan â€¦ His main aim is to come back to Australia, see his kids, and settle down.”

Blaming the Australian government for pressuring his son to plead guilty, Terry said

“They demonised him, they pre-judged him for five years. I suppose Mr Howard would be throwing his hands up with glee at the moment but as far as I’m concerned this was a way out for David regardless of whether he was guilty or innocent, we’ll never ever know now.”