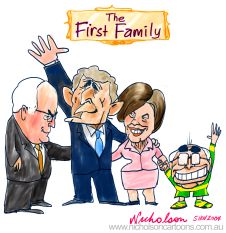 Be afraid, be very afraid. You can’t rely on the current Howard government to help you out if you’re in strife abroad. The value of being Australian diminishes daily under little Johnny’s uncaring, unscrupulous, double-dealing regime.

Outside court, opposition legal affairs spokesman Kelvin Thomson slammed Mr Bennett’s argument that the government had no legal obligation to help citizens abroad, saying it would “send a shiver down the spine” of Australians overseas.

He said the comments were in stark contrast to Mr Downer’s “boast back in 1997 that `the duty to protect our citizens overseas is a fundamental responsibility’.

What a state of affairs. If there is no legal requirement, then for all intents and purposes a government can wash its hands of its duty to a citizen caught up in trouble abroad, irrespective of whether a person is perpetrator or victim. It makes carrying the Australian passport seem just a little less comforting.

The Judge hearing the Federal Court case against the Howard mob, Justice Brian Tamblin, has reserved his judgement due to the complexity of the case. One would think it would be cut and dried that the role of our government is to represent and protect the interests of its citizens wherever they may be. Apparently not.

Little Johnny’s mob could have past retrospective legislation to enable Hicks to be tried in Whorestralia had they wished and didn’t. Former Lib appointed judge, Stephen Charles, QC, comments on such a Whorestralian trial and reveals possible reasons why little Johnny failed to pursue a fair trial for Hicks in Whorestralia:

“The coercive methods used by investigators would be examined in detail, further damaging the reputations of the US military and both the US and Australian governments. The conclusion seems inescapable that the Australian Government was concerned that the evidence upon which the prosecution relied for a conviction of Mr Hicks would be rejected in a trial in Australia … and that it did not wish him to be tried before an Australian court, precisely because such a trial would have to be a fair one.”

Mr Charles is one of a band of former judges, including former Family Court chief justice Alastair Nicholson and former High Court judge Mary Gaudron, to have spoken out against the Federal Government’s treatment of Hicks.