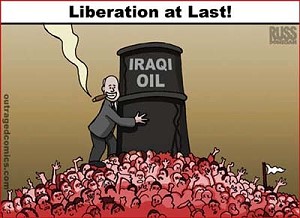 The Coalition of the Gobbling has now set the scene for massive exploitation by its vampirish associates of Iraq’s oil without so much as a murmur from the Iraqi puppet government.

The law is set to be approved in March.

On Monday, Prime Minister Nuri al-Maliki’s cabinet in Baghdad approved the draft of the new Iraqi oil law. The government regards it as “a major national project”. The key point of the law is that Iraq’s immense oil wealth (115 billion barrels of proven reserves, third in the world after Saudi Arabia and Iran) will be under the iron rule of a fuzzy “Federal Oil and Gas Council” boasting “a panel of oil experts from inside and outside Iraq”. That is, nothing less than predominantly US Big Oil executives.

The law represents no less than institutionalized raping and pillaging of Iraq’s oil wealth. It represents the death knell of nationalized (from 1972 to 1975) Iraqi resources, now replaced by production sharing agreements (PSAs) – which translate into savage privatization and monster profit rates of up to 75% for (basically US) Big Oil. Sixty-five of Iraq’s roughly 80 oilfields already known will be offered for Big Oil to exploit. As if this were not enough, the law reduces in practice the role of Baghdad to a minimum. Oil wealth, in theory, will be distributed directly to Kurds in the north, Shi’ites in the south and Sunnis in the center. For all practical purposes, Iraq will be partitioned into three statelets. Most of the country’s reserves are in the Shi’ite-dominated south, while the Kurdish north holds the best prospects for future drilling. 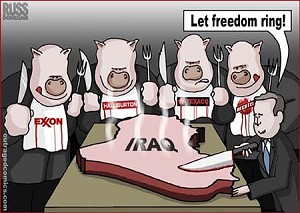 The approval of the draft law by the fractious 275-member Iraqi Parliament, in March, will be a mere formality. Hussain al-Shahristani, Iraq’s oil minister, is beaming. So is dodgy Barnham Salih: a Kurd, committed cheerleader of the US invasion and occupation, then deputy prime minister, big PSA fan, and head of a committee that was debating the law.

But there was not much to be debated. The law was in essence drafted, behind locked doors, by a US consulting firm hired by the Bush administration and then carefully retouched by Big Oil, the International Monetary Fund, former US deputy defense secretary Paul Wolfowitz’ World Bank, and the United States Agency for International Development. It’s virtually a US law (its original language is English, not Arabic).

Scandalously, Iraqi public opinion had absolute no knowledge of it – not to mention the overwhelming majority of Parliament members. Were this to be a truly representative Iraqi government, any change to the legislation concerning the highly sensitive question of oil wealth would have to be approved by a popular referendum.

In real life, Iraq’s vital national interests are in the hands of a small bunch of highly impressionable (or downright corrupt) technocrats. Ministries are no more than political party feuds; the national interest is never considered, only private, ethnic and sectarian interests. Corruption and theft are endemic. Big Oil will profit handsomely – and long-term, 30 years minimum, with fabulous rates of return – from a former developing-world stalwart methodically devastated into failed-state status.

Once the insurgents, guerillas and Iraqi public become aware of the impending oil rape by the Coalition of the Gobbling, it is quite possible that there will be a strategic unification and uprising against the common colonialist enemy which no Doodoo surge will be able to suppress.

One Reply to “The Great Iraqi Oil Robbery”