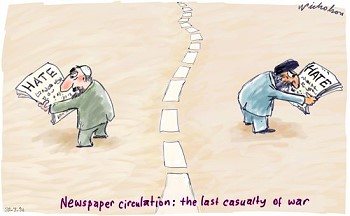 The United Stupids are now pushing for more pressure against Iran in the UN Insecurity Council, while

Iran’s top nuclear negotiator again signaled that Tehran would be willing to engage in “constructive and logical” negotiations with the United States.

Iran’s proposal to cap its enrichment at very low levels may be winning some support in Europe.

This is not enough apparently for the Coalition of the Gobbling, who want complete suspension of enrichment. There is a distinct possibility that the United Stupids and United Kooks are choosing precisely the same deliberate path of deception which led to their illegal invasion of Iraq.

U.S. Secretary of State Condoleezza Rice reiterated this weekend that she would negotiate with Mottaki as soon as Iran had suspended enrichment.

Iran is not in breach of the NPT – and even the US does not claim it is. The US claims rather that Iran is untrustworthy, and therefore should be denied the rights it has under the treaty.

Like all non-nuclear weapons signatories, Iran maintains the right to have access to nuclear technology, to build nuclear power plants, and to enrich uranium for peaceful purposes.

Hans Blix, the last weapons inspector in Iraq before the illegal invasion, warns that

“humiliating” Iran over its uranium enrichment could spawn intransigence. “It’s an observation I’ve made before regarding Iraq,” he told reporters in New York today.

“Why did the Iraqis behave as they did in the 1990s (and) send away the UNSCOM inspectors and close the door to them?” he asked, referring to the UN Special Commission mandated to inspect Iraqi weapons of mass destruction after the 1991 Gulf War.

“One element was ‘humiliation’,” he said. “It was not rational of them to stop the inspections, it really worked against their own interest and yet I can see that the humiliation, the fury, was such that they said, ‘To hell with it’,” said Blix.

Iran does not have the capacity at this time to produce nuclear weapons and such capacity by all authoritative sources is years away. The UN’s nuclear watchdog (IAEA) continues to call for de-escalation of the rhetoric and reliance on negotiations, and has reported that there is no evidence of nuclear weapons production.

Israel on the other hand has an arsenal of 200-400 nukes, a threat to the rest of the region for decades. There are no guarantees that at some point in the future, religious and/or political fundamentalists won’t be in power in Israhell. At present, in its continued violation of international law in regard to its occupation of Palestine and Syrian territory, Israel remains an extreme provocation to its neighbours to develop nuclear parity, and if not nuclear parity, chemical or biological weaponry for deterrence.

On several occasions since 1974, countries in the region lobbied in the UN for the Middle East to become a nuclear weapon free zone. The only dissenting voice was Israel. If we are to have peace in the world, and especially if we are to avoid a nuclear holocaust, there must be a universal, not a selective, commitment to the rule of law and international security.

It is important to stress that it was the United States which first introduced nuclear weapons to the Middle East starting in 1958 and has continued to bring tactical nuclear weapons on its planes and ships ever since.

Other countries in the Middle East which are predominantly Sunni, including the fundamentalist Saudi tyranny, are not keen on Iran becoming a dominant power in the region either. The United Stupids and Israhell have both met recently with Saudia, (and so has Iran). With the demonisation of Iran by United Stupids, United Kooks and Israel in full swing, Israhell and the neoziotards are palpably keen for the Coalition of the Gobbling to do the dirty work, with the main impetus coming from AIPAC.

Israeli Defense Force chief artillery officer Gen. Oded Tira has griped that â€œPresident Bush lacks the political power to attack Iran,â€ adding that since “an American strike in Iran is essential for [Israel’s] existence, we must help him pave the way by lobbying the Democratic Party (which is conducting itself foolishly) and US newspaper editors. We need to do this in order to turn the Iran issue to a bipartisan one and unrelated to the Iraq failure.” Tira urges the Lobby to turn to “potential presidential candidates … so that they support immediate action by Bush against Iran,â€ while Uri Lubrani, senior advisor to Defense Minister Amir Peretz, tells the Jewish Agency’s Board of Governors that the US “does not understand the threat and has not done enough,â” and therefore “must be shaken awake.”

claiming its leader is a new Hitler and that Jews are threatened with another Holocaust.

A more accurate reading of the situation might be to say that Israel is determined to protect the monopoly of nuclear weapons, which it has enjoyed in the Middle East for more than 40 years. 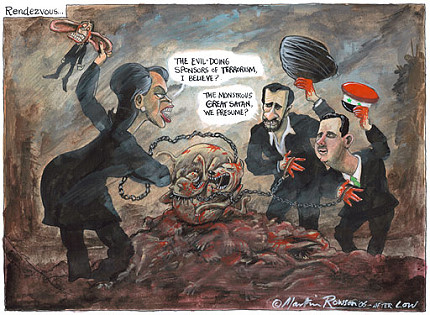 The United Stupids are to have talks with Iran, Iraq and Syria in Baghdad about Iraqi security. The old carrot and stick approach – while the Iranians are threatened with fleets and sanctions, the Stupids will expect them to be cooperative especially since they are deigning to parley with them. What will the Stupids offer? There is doubt about whether Iran is actually destabilising Iraq anyway – the propaganda the Stupids tried to sell that the Iranians were back the insurgency was laughable. The insurgency is predominantly Sunni, and Iranians are Shite. The Iraqi government is majorly Shite as are the Sadr nationalists. Do the Stupids want the Iranians to start backing the Sunnis?

Whilst any talks are a positive sign, the United States may well be sussing out the enemy at close hand under a false pretext. It’s probably too much to hope for that the Stupids might have woken up that the only real, workable long term solution for the whole region, before things go too far, is to start lobbying for a nuke weapon free zone. Whether Israhell would cooperate is another matter, yet if the Stupids insisted, Israhell must follow or risk its benefactor’s largesse and support.

One Reply to “Coalition of the Gobbling vs Iran V11”