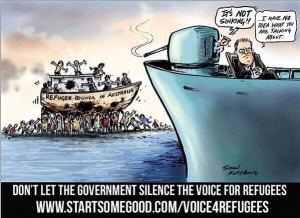 Late night thoughts of Morriscum
set adrift in a leaky boat
with Australians online taking bets
how long he can stay afloat.

Abbott’s lashed firmly to the mast
Bishop’s locked in the hold
When the boat sinks we’ll all cheer
and divvy up the gold.

Brandis burnt international law
to please his zionist mates,
It won’t keep him warm 10 fathoms down
When he meets his watery fate.

Cormann’s whining on his mobile
calling up the crony banks
Too late for party kickbacks
the ocean gives us thanks.

For in all Australia’s history
there’s never been rogues as these
Corrupt and heartless brigands all
may they drown on the open seas.

Alas, the dream is but a dream
still the scurvy wretches spout
from their padded thrones in Parliament
We’ll have to vote them out.

If these Tamil asylum seekers have been handed over to the Sri Lankan navy, Abbott and his murderous crew should be at the Hague for crimes against humanity.

dob in a colleague
divert healthy criticism
away from grabbit

The state of free speech in Australia – the Immigration department stalks refugee activist on facebook and threatens her on twitter
Tony Abbott Haiku Centre
Palm Sunday rally for refugees:
https://www.facebook.com/events/1492369754323235/
Dob in your tweeting mate at work? So much for free speech
Death stare Bishop declares BDS , which is supported by the likes of Archbishop Desmond Tutu, to be ‘antisemitic’, erroneously asserts that not all Israeli settlements are illegal, clinging to the delusion of the two state non-solution.
Resettlement not a ticket to first world
How the World Bank help the ruling elite suck countries dry who can least afford it, through deregulation

Manus Island Has No Dentists

You privileged imperial settler fucks
squatting on top of stolen earth,
tormenting the tormented
who flee from wars you helped create
with scheming crony capitalist mates,
may you suffer a thousand abscesses,
temporary fillings for absent justice
and learn firsthand about
pain you inflict on others
with closed ears, slammed racist doors,
gnashing sweet-toothed fangs
on Tim Tams and Cadbury tours,
privileged slick white saviour thieves
who send hand-patters, guards and no dentists,
may your monocultural destruction
destroy you and the land regenerate
on the bones of sociopathic corruption.

‘There is a lack of medical treatment and medicine for all diseases. The medical team suggests drinking water as the only treatment.

The only medication is Panadol, which is used as a painkiller to reduce pain temporarily but is no cure.

There is no dentist or dental treatment on the Island. Many of the detainees suffer from dental problems and the excess use of Panadol not only doesn’t help the pain but causes stomach and kidney problems.

There are no recreational or educational activities in this camp and as a result detainees are experiencing extreme mental and psychological problems. ‘

For Grabbits grasp as grabbits do
Farewell your civil liberties,
What’s good for them isn’t good for you
No protests to hinder productivity.

It’s work till you drop
for trickled down slops,
Like scum, Grabbits settle on top
Grabbits want the whole damn lot.

Tony Abbott confesses his guilty food pleasures and diet secrets
Syrian repatriation in the face of death: ‘The Department for Immigration offered repatriation to two Syrian asylum seekers on Manus Island, despite one saying he faced “certain death” if returned, according to leaked case manager documents obtained by Guardian Australia.’
Government pressures Manus asylum seekers to return home while pressuring to allow attackers back in

Brandeis: “We Grabbits will force you to grabbit from our pet grabbits or you will be cut off at the knees, left to moulder in the outer limits.” 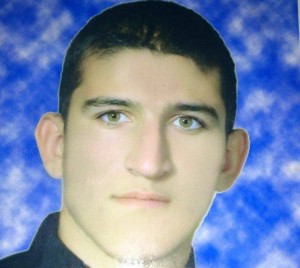 little learned from past but how to forget
racist wheel turns, has lost its brakes
we are deformed by all we have met
this banal society banality makes.

If G4S is to blame for Manus violence, the government has blood on its hands

Reza Barati’s family: ‘We want answers. What did they do to him?’

Australia’s obscene cruelty toward refugees which it stores out of sight in its gulags overseas cannot be ignored and must be stopped. There’s no real dentist on Manus Island, says whistleblower Azita Bokan.

“Put it this way, the very simple things – everyone is in a queue hoping that maybe one day there will be a miracle and they will get a dentist there. Everyone is having massive pain. They are beside themselves with pain and all that’s been done is they take them to the guy that calls himself a dentist and all he does is he pulls teeth out. And most of them, their tooth has been pulled out – teeth that could have been saved. “

In today’s Guardian, Ant Loewenstein rightly advocates the use of UN sanctions to pressure the Australian government to end its regime of terror against hapless refugees corralled in offshore detention camps. Sanctions would make Australians, their racist government, the Australian media and the world sit up and take notice and apply punitive pressure to end Australia’s disgraceful treatment of refugees.

Western leaders live under the belief that they can behave as they like to the powerless and invisible. Asylum seekers are essentially voiceless, reporters are barred from visiting where they’re warehoused in Nauru and Papua New Guinea, and the daily drumbeat of dishonest rhetoric wrongly accuses them of being “illegal”.

Even the threat of sanctions against Australia would enrage the Abbott government and its backers. Australia is a democracy, they will claim. Australia’s decisions are checked and approved by lawyers, they may argue. Australians can vote out recalcitrant regimes, they could state.

And yet transparency over asylum seeker policy has arguably never been more absent.

The shared impunity which the US delivers to its fellow settler colonial human rights abusers is an insult to justice. This impunity must end in order that criminals who abuse human rights of others can be brought to justice. The West has no credibility unless it makes an effort to adher to the values it claims it represents when its orientalists laud it over others.

The Australian government feels invincible, protected under America’s security blanket and selling its dirty coal to the world. We are sold the myth that building remote detention camps will protect us from the “hordes” trying to enter our promised land. It’s impossible not to conclude that Australia, a colonial construction, doesn’t see itself akin to Canada, the US and Israel as countries struggling to cope with people various officials call “infiltrators”. That bubble must be burst, and the threats of sanctions will be the required shot. Until Australia and its defenders appreciate the necessity to treat asylum seekers with dignity and respect, they should feel the world’s opprobrium.