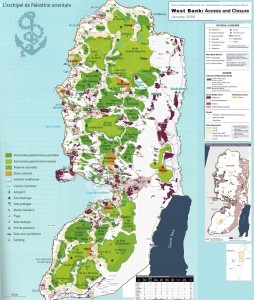 This is an excellent animation which illustrates the fallacy of Zionist claims to Israel’s current terrortory.

There’s a new book out challenging the fallacious Zionist narrative of Israel.

What if the Palestinian Arabs who have lived for decades under the heel of the modern Israeli state are in fact descended from the very same “children of Israel” described in the Old Testament?

And what if most modern Israelis aren’t descended from the ancient Israelites at all, but are actually a mix of Europeans, North Africans and others who didn’t “return” to the scrap of land we now call Israel and establish a new state following the attempt to exterminate them during World War II, but came in and forcefully displaced people whose ancestors had lived there for millennia?

What if the entire tale of the Jewish Diaspora — the story recounted at Passover tables by Jews around the world every year detailing the ancient Jews’ exile from Judea, the years spent wandering through the desert, their escape from the Pharaoh’s clutches — is all wrong?

That’s the explosive thesis of When and How Was the Jewish People Invented?, a book by Tel Aviv University scholar Shlomo Zand (or Sand) that sent shockwaves across Israeli society when it was published last year. After 19 weeks on the Israeli best-seller list, the book is being translated into a dozen languages and will be published in the United States this year by Verso.

Zand’s central argument is that the Romans didn’t expel whole nations from their territories. Zand estimates that perhaps 10,000 ancient Judeans were vanquished during the Roman wars, and the remaining inhabitants of ancient Judea remained, converting to Islam and assimilating with their conquerors when Arabs subjugated the area. They became the progenitors of today’s Palestinian Arabs, many of whom now live as refugees who were exiled from their homeland during the 20th century.

This narrative has huge significance in terms of Israel’s national identity. If Judaism is a religion, rather than “a people” descended from a dispersed nation, then it brings into question the central justification for the state of Israel remaining a “Jewish state.”

And that brings us to Zand’s second assertion. He argues that the story of the Jewish nation — the transformation of the Jewish people from a group with a shared cultural identity and religious faith into a vanquished “people” — was a relatively recent invention, hatched in the 19th century by Zionist scholars and advanced by the Israeli academic establishment. It was, argues Zand, an intellectual conspiracy of sorts. Segev says, “It’s all fiction and myth that served as an excuse for the establishment of the State of Israel.”

The book has very important ramifications for the development of a future one state solution.

But the idea of a single, binational state has more recently been marginalized — dismissed as an attempt to destroy Israel literally and physically, rather than as an ethnic and religious-based political entity with a population of second-class Arab citizens and the legacy of responsibility for world’s longest-standing refugee population.

A logical conclusion of Zand’s work exposing Israel’s founding mythology may be the restoration of the idea of a one-state solution to a legitimate place in the debate over this contentious region. After all, while it muddies the waters in one sense — raising ancient, biblical questions about just who the “children of Israel” really are — in another sense, it hints at the commonalities that exist between Israeli Jews and Palestinian Arabs. Both groups lay claim to the same crust of earth, both have faced historic repression and displacement and both hold dear the idea that they should have a “right of return.”

And if both groups in fact share common biblical ties, then it begs the question of why the entirety of what was Palestine under the British mandate should remain a refuge for people of one religion instead of being a country in which Jews and Arabs are guaranteed equal protection — equal protection under the laws of a state whose legitimacy would never again be open to question.

A picture tells a thousand words as the old cliche goes. From this map it’s very plain why Palestinians are rightfully aggrieved and why Israel is at fault for this despite copious protestations of innocence. 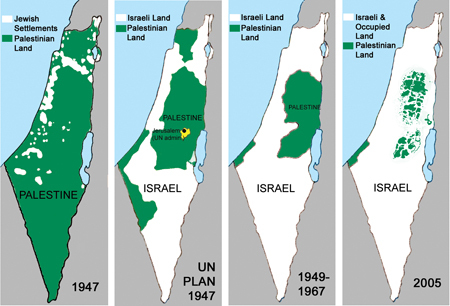 Detailed maps of Palestine pre and post 1948 can be readily viewed elsewhere.