Hamstrung by the cheerleading, braindead US with its bizarre unilateral support for Israel, the world can only watch as Israel slaughters Palestinians as if for sport, whilst nauseatingly dissembling that it isn’t targeting civilians and that it is acting in self-defence. Even if the UN could pass a resolution, militant Israel is not known for abiding by international conventions and laws.

Al Jazeera is still managing to get some news out of Gaza, and the news is beyond shocking.

“Yesterday the bread in our house ran out and me and my brother went to the bakery and waited three hours just to buy bread. There is not a lot of food in Gaza.

We have water, but we need electricity to power the pump so the water may run out in a few days. This has already happened for some of our neighbours.

Of course I worry about this situation and that maybe there will be no food left and we will have to go searching for it. But I don’t know what will happen. I don’t have any thoughts. I am living in the moment and waiting to see what will happen.”

All of the citizens of the so-called free world are watching us on their high definition monitors, while we’re being slaughtered.

People know what is going on, the international community knows. When are they going to take action? We’re in the 21st century – is this what civilisation is all about?

As a Palestinian, I don’t rely on the international community; they abandoned us.

Isn’t this what the Security Council and Geneva Conventions are about – fighting to prevent war?

When the fuel runs out it’s going to be pitch black – we’ll lose all communications and no one will know what’s going on. We’re facing a dark destiny.

The situation is going to become really bad – way beyond catastrophic.”

The ground offensive has begun and they’re shooting at anyone they can.

I don’t know what’s going on on the front lines, but here at the hospital we’re seeing more and more people who have been shot.

The international community is just standing by and watching – people have gone deaf and forgotten how to speak. All we hear are bombs and rockets, no words.

There have been demonstrations – the people stand behind us. But the governments can’t hear them.

International governments can stop this but they’re not doing anything.

I see convoys of medicine and supplies coming our way on the TV, but I haven’t seen any of it with my own eyes yet.

We’re still working with what we have, but it’s all running out.”

And the kids – I have no words to describe how they felt. They were screaming and crying and we can’t help them because each time they hear more attacks their fear increases.

It’s getting worse and worse. I am worried because I don’t see an end.

I am very depressed and everyone in my family is the same: depressed, afraid and sick because the Israelis are becoming more and more crazy.

I believe the resistance is strong and brave – facing the Israeli army is not an easy thing. They are sacrificing everything for the sake of their home country and their land.

Why doesn’t the international community demand that Israel halt its attacks immediately? They are only on the side of Israel, not with us. They want more Palestinian victims in Gaza – people who did nothing and do not deserve to be killed in such an ugly way.”

The bombing is hurting lots of civilians because it is a densely populated area. This is the reality on the ground. You cannot avoid that even if you want to.

The humanitarian situation is deteriorating. There is no electricity in Gaza now – last week we used to get it for two hours a day, now we get nothing.

Before we had running water for three hours out of every 48. Now there is no water because it depends on electricity.

Also, the sewage system does not work because there is no electricity or spare parts.

There is a lack of qualified doctors for the very complicated surgeries and a lack of medicines.

There is no wheat or sugar in stores – many essential items are missing.

This operation is re-emphasising that every Palestinian is a suspect; the war being fought against us proves that there are no moral standards whatsoever, this mentality that is practicing all those brutalities against civilians will only lead to more extremism.

I was one of the people who believed in political solutions and that peace is possible, yet what we see negates all that. It is evident now more than at any time that Israel has no interest in peace.

Gaza is a big prison and Israel wants to turn us into a model of its hegemony maybe to show the world its deterrent force.

What is taking place is not a war; because there is no proportionality between Palestinian resistance and Israeli acts, it’s an aggression.

I feel like we are living in a type of madness that enhances the radicalism on both sides. I wonder whether we are the Native Americans of the 21st century.

What can I say. I’m beyond disgusted – for me, Israel has forfeited its habitually trumpeted ‘right to exist’ through its frenzy of militant, joyous sadism. Its actions aren’t about self-defence, they are sheer aggression and spite against a defenceless population, without bomb shelters or bunkers. For me, the Gazan Shoah is the straw that broke the camel’s back.

@AJGaza Sixty per cent of today’s casualties are women and children, according to AJA’s correspondent, reporting from inside Shifa Hospital

Leaflets dropped from airplanes said, “Hamas is getting a taste of the power of the Israeli military after more than a week and we have other methods that are still harsher to deal with Hamas. They will prove very painful. For your safety, please evacuate your neighborhood.”

Palestinians said they had no place to go because so many neighborhoods received the same message.

In effect, they’re telling Gazans to find a safe place to go to while keeping them from having any such places. The only safe locations now are outside what many call the world’s largest prison.

As an aside for all those who can only discuss this conflict in terms of rockets, I would bet that every single Gazan seeking a safe place would prefer to sit it out in Sderot or Ashdod. The only Israelis from those places willing to go to Gaza would do so as IDF soldiers, on the other hand.

Is the West Bank next?

Why Aren’t More Americans Dancing To Israel’s Tune? Max Blumenthal discusses Israeli hasbara and why it isn’t working so well in America, providing some useful links chronicling the Israeli attack on Gaza which Israel claims is merely an attack on Hamas, which Israel aided and abetted in the past.

The Zionist media strongarmers rush to insist on retractions by the media whom they claim misinterpreted Israhelli Deputy Defence Minister Vilnai’s use of the term ‘shoah’ in his repulsive collective bullying threat against the beleaguered Palestinian people. Guardian editor Alan Rushbridger apologises profusely for using the word holocaust as a translation – still, the Palestinian people and the world have heard Vilnai’s allusion, intended or not, loud and clear.

Will apologies now gush from multiple newspaper editors to Iranian leader Ahmadinejad for their definite misinterpretation of his speech where they and the Zionist propaganda machine claimed he said Israhell would be ‘wiped off the map’ when he actually said the Zionist regime would be metaphorically ‘wiped from the page of history’? Yeah, right, sure they will.

Wikipedia, flawed though it may be at times, has this to say:

Shoah is the Hebrew term meaning “disaster” or “conflagration”. With addition of “Ha” (meaning ‘The’ In Hebrew) – Ha Shoah is commonly used to refer to the Holocaust.

A quick google for ‘shoah’ finds the common result in English at least is the Holocaust, whereas HaShoah appears to be associated with Holocaust Remembrance Day. 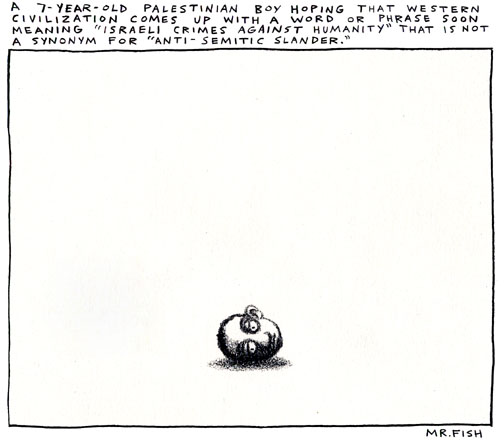 The Paligate plot thickens with this Vanity Fair report where the US is revealed to have secretly conspired to give arms to Fatah strongman villain Dahlan in order to provoke a civil war to remove the democratically elected Hamas government. The elections, perpetrated at too short notice for Fatah to win, were encouraged by the US. Folowing the Hamas electoral win, the US wailed and gnashed teeth in consternation:

“Everyone blamed everyone else,” says an official with the Department of Defense. “We sat there in the Pentagon and said, ˜Who the fuck recommended this?””

Some analysts argued that Hamas had a substantial moderate wing that could be strengthened if America coaxed it into the peace process. Notable Israelis such as Ephraim Halevy, the former head of the Mossad intelligence agency shared this view. But if America paused to consider giving Hamas the benefit of the doubt, the moment was “milliseconds long,” says a senior State Department official. “The administration spoke with one voice: ˜We have to squeeze these guys. With Hamas’s election victory, the freedom agenda was dead.”

One would think after numerous utter failures and countless lives lost through cossetting of a lengthy list of previous dictators/strongmen, including Saddam, the Stupids would have learnt by now. In the current debacle according to the report, the US UN ex-representative John Bolton blames Miss Prim, Condisleezer, clumsily seeking to make her mark on history and demonstrating she has not learnt from it.