An acknowledgement that the impressive impact of the BDS campaign could not be ignored came in the form of another Facebook page, which is fake and seeking to disrupt and subvert. Unlike the official page, the fake Facebook page posts erroneous and racist material to discredit BDS, BDS activists, reliable sources of information about the campaign, like Electronic Intifada and even the Rolling Stones themselves. Though their identities are unknown, the creators of the false page are clearly using familiar Israeli propaganda techniques.

The Call to Boycott, Divestment and Sanctions is Worthy of Respect by The Rolling Stones

Aimed at pressuring the Israeli regime to end its crimes against humanity of settler colonialism and apartheid, to institute equal rights for all in Israel and recognise the right of Palestinian refugees driven from their homeland in 1948 to return to their homes, the BDS tactic is solidly grounded in international law and human rights. Consistently, the BDS movement and Palestinian civil society leaders reject all racism and bigotry. Thus, BDS seeks to achieve justice, freedom and equal rights for all, ending the unsustainable, undemocratic and oppressive impasse engendered and sustained by the racist, expansionist Israeli state and its enablers who provide it with impunity, in particular, the US.

The Israeli regime regards BDS as an assault on its legitimacy, and indeed, the present systemic, institutionalised, discriminatory and colonial practices of the Israeli state could not withstand adoption of respect for human rights and international law. Israel ignores at least 32 UN Security Council Resolutions against it and many more UNGA resolutions.

Recently, PM Netanyahu again increased the prominence of the BDS campaign at the annual AIPAC Conference in the US, reiterating that BDS is a core threat to Israel. Yet this perception of a BDS threat by Israel is not new. For several years, propaganda tacticians at the Israeli Reut Institute have sought to counteract BDS success by ‘delegitimising the delegitimisers’, attacking the BDS movement, its human rights and justice aims, Palestinians and BDS activists with false narrative redolent with seductive right entryist mythology, libel, and initiation of hasbara networks in strategically located ‘hubs’ around the world to proliferate anti-BDS agitprop, including employees in Israeli embassies paid to monitor and counter BDS. Israeli university and student union courses train recruits to join the battle to disguise Israel’s crimes. Israeli propaganda – hasbara – is coordinated from the top down – from Netanyahu’s office to a chain of formal and informal actors.

Consequently, in response to global awareness and effective implementation of BDS, Israeli hasbara initiatives have mushroomed. On Facebook alone, there is a maze of groups and pages devoted to hasbara dissemination. Armed with lists of sloganistic ‘talking points’ and associated dogma, paid and unpaid ‘defenders of Israel’ are coordinated to post throughout social media, attacking BDS campaigns and BDS activists, attempting to obscure the truth about Israel’s criminal behaviour perpetrated against Palestinians, whose prior existence in the region as an Indigenous community and whose Nakba (catastrophic mass expulsion by settler colonial zionists in 1948) Israel denies. Israel has even passed a law to punish people in Israel who commemorate the Nakba.

Not only does it expel Palestinians from their land which it covets, the settler colonial Israeli regime attempts to extinguish their history as well. As MK Haneen Zoabi said at the Russell Tribunal Hearings at Capetown:

“Israel has confiscated my land and has started to define me as the invader of the land. They call us in the Knesset, in the courts, in the media the invaders of the land … when they confiscate our land in the Galilee and the Negev, they said they are going to redeem the land, redeem, I don’t know this word, I ask about it – salvation from me, the indigenous people, there. It is not about stealing the land, it is about stealing my homeland, my relation with my homeland. They are trying to transmit, to rewrite history, they don’t like history, they don’t like to read history, what happened before 1948 and that means we were there, the Palestinian people … they like more to write history. And they say I am a risk, they must reserve the land. So the crime is not really just to steal my land, they are trying to redefine my relation with my homeland. It is not my homeland anymore. I cannot claim it. They rewrite history and I am the invader of the land.”

The falsehoods presented in Israeli hasbara form part of the duplicitous rewriting of history, relying upon repetitive saturation and intimidation to provide a transparent, shabby defence of the faltering “Brand Israel”. 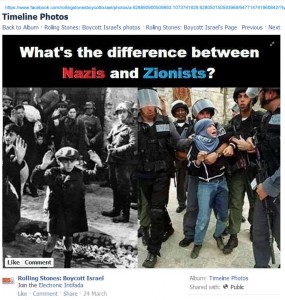 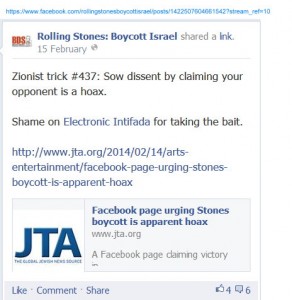 Posts on the fake BDS page seethe with racist memes, abuse, and threats, padding Zionist hasbara confections which wrongly accuse BDS of being ‘antisemitic’ and threatening performers. Racist comments on the page, posted predominantly by Zionists, are not moderated. Zionists are targeted extensively by the page admins as ‘Zionazis’ to give the false impression the page is against Zionism, whilst conflating Nazism with Zionism and Israel. In fact, as Israel perpetrates the crimes against humanity under international law of apartheid and colonialism, BDS acts directly to create accountability for these crimes. There is no ‘crime of Nazism’ for which to prosecute the Israeli regime, even if it was applicable. For sure hasbara agents know that BDS does not target individuals or Jews – BDS is squarely focused on the Israeli state and its institutions.

Attacks on the Rolling Stones

On the hoax page, the administrators post vile abuse and threats to the Rolling Stones like ‘Together we can convince this group of ailing rockers that supporting apartheid and genocide will not pay‘, ‘Return what is ours or you, and whichever shitty bands choose to tie their destiny with yours, will meet a horrible fate‘ and ‘cancel your performance in front of the Zionazis or live to regret it!‘

As one of their well-evidenced tactics, Zionist hasbara agents have propagandised that BDS advocates threaten performers. In the absence of real evidence of BDS threats against performers, the hoax page saboteurs have manufactured substitute data to confuse people without a background in the issue and to discredit the BDS campaign. 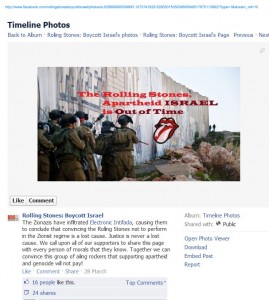 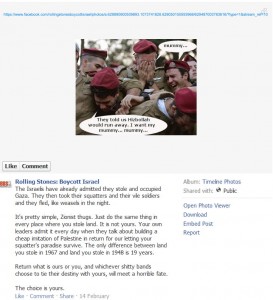 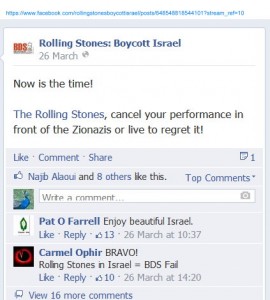 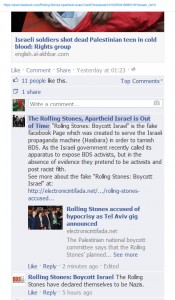 The hoax page has also posted the header image of the real BDS page in an apparent attempt to blur the distinction between the two.

The BDS movement persuades performers to support the boycott through ethical human rights education and campaigns. In contrast, the hoax page owners have now posted audaciously on the legitimate BDS page with comment designed to create a negative view of the BDS campaign, specifically accusing the Rolling Stones of having “declared themselves to be Nazis“. The legitimate BDS page moderates all racist and threatening comments as a matter of course and thus these saboteur comments were removed. It is the Palestinian people who pay for Israel’s crimes of apartheid and colonialism with ongoing daily calamities inflicted upon them, and it is Palestinians who suffer when performers break the boycott, which they are asked politely to respect. 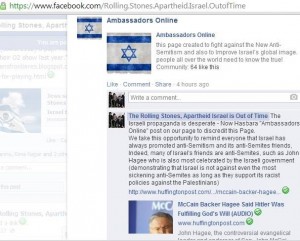 This was not the only assault on the real Rolling Stones Boycott Israel page. An Israeli hasbara organisation called “Ambassadors Online” advertised itself there as ‘a page created to fight against the ‘New Antisemitism’ and also to ‘improve Israel’s global image’. ‘New Antisemitism’ is a hasbara newspeak term which intentionally and misleadingly conflates all Jews with Zionism, in order to protect the oppressive behaviour of the Israeli state and delegitimise BDS. Boycott, divestment and sanctions against Israel are supported by many Jewish organisations and individuals. However, in Israel since July, 2011, advocacy of boycott invokes heavy financial sanctions. Elsewhere the Israeli Shurat HaDin legal apparatus has been attempting to conduct lawfare suits against individuals who advocate boycott in countries as distant as Australia. By ignoring, belittling and vanishing Jewish voices who dissent from Israel’s state policies and ideology, the hasbara marketeers are indulging in antisemitism themselves, debasing the problem of real antisemitism which the BDS movement and leading Palestinians who support BDS explicitly oppose. 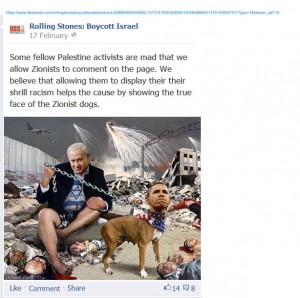 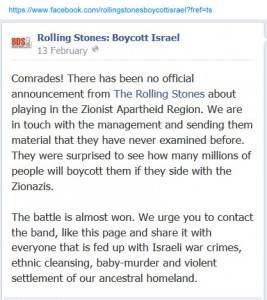 The use of abusive terms like ‘Zionazis’, ‘Zionist suckers’ ‘baby-murder’, ‘Zionist dogs’ by the saboteurs diverts focus and plays into the ‘new antisemitism’ mythology and reinforcing hasbara that Israel and its nationalists are singled out for special approbrium. In fact, the Israeli regime singles itself out for impunity for its very real crimes of war, apartheid and settler colonialism and it is these state practices which BDS addresses, to achieve legally guaranteed rights, justice and freedom for the Palestinian people whom Israel has oppressed for the past 65 years.

Currently, the Palestinian Authority has applied to join 15 UN treaties including the Geneva Conventions. Former Israeli Ambassador to the US, Michael Oren points to the potential for the BDS campaign to gain additional strength from this move:

“Palestinians turning to UN institutions potentially exposes Israel to massive sanctions and Tel Aviv has to deal with all these threats seriously.”

The BDS campaign is now mainstream, both for the Israeli regime and in the media. No music, not even that of The Rolling Stones, can bridge Israel’s apartheid, a racist, cruel system of institutionalised inequality and oppression. Playing Israel’s Sun City and crossing the boycott picket line affects the image of performers, an impact which can only increase over time as the BDS movement for justice and freedom of Palestinians continues to grow.

Please do visit, like and share the real Boycott Israel Rolling Stones page to discover how ethical BDS human rights campaigns are conducted, and also sign the PACBI petition “The Rolling Stones: Please cancel your show and boycott apartheid Israel“.