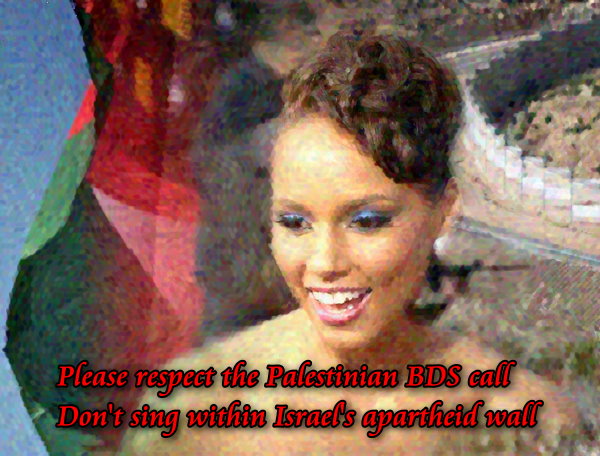 Tweet to Alicia here to let her know how you feel

We urge you to cancel your plans to perform for a segregated audience in Tel Aviv on July 4, 2013. Palestinian civil society has called for Boycott, Divestment and Sanctions (BDS) against Israel’s policies of colonialism, occupation and apartheid towards the Palestinian people.

Israel’s attempts to hide systematic decades-long oppression and human-rights abuses against the Palestinians depend on its ability to maintain the facade of a progressive and democratic image in the eyes of the international community. Israel often goes as far as promoting itself as “the only Democracy in the Middle East.” Israel’s apartheid policies, however, even permeate events as joyous as concerts: Palestinian fans of your music living under the Israel’s brutal military occupation of the West Bank or its medieval siege of the Gaza Strip will be prohibited from coming to Tel Aviv to enjoy your performance. These 4 million people who are being denied their most fundamental rights include many Palestinian women, whom will not have the chance to be empowered by hearing you sing.

Palestinian Freedom Riders challenged Israeli segregated buses on which they are not allowed to travel. These buses carry instead Israeli settlers to and from their homes, illegally built on stolen land.[1][2][3] The ethnic-supremacist state of mind does not end there, unfortunately, as evidenced by the Tel-Aviv city councilman who appealed to the state to allocate segregated buses for African refugees and migrant workers in the city[4].

Prominent figures (authors, professors, and musicians) have visited Israel, Occupied Palestine and Gaza to witness for themselves the treatment of Palestinians living under Israeli occupation, and have vowed not to lend their legitimacy to these crimes.

Alice Walker made the following comments on her visit to Palestine: “Going through Israeli checkpoints is like going back in time to American Civil Rights struggle…I am a big supporter of BDS. I frankly think that it is the best, absolutely the best way.“[5]

“One of the things so painful to remember about the segregated south is that no matter what white people did to them black people were not allowed to fight back, not even with a word or a glance, hence the expression “reckless eye-balling” which led many a black person to be beaten or killed. The idea that the people of Palestine are not even supposed to fight back… To collectively punish them (by bombing and starvation) for electing their own government in a democratic election acknowledged by most observers to have been fair, is sadistic as well as internationally condemned as illegal.“[6]

Professor Robin Kelley offers this analysis: “My last book was about [the jazz musician] Thelonious Monk. … And so for people of my generation, the Israel-South Africa nexus, dispossession of Palestinians … these were the key questions for anyone politically active in the 1980s. … witnessed a level of racist violence that I hadn’t even seen growing up as a black person here in the States (laughs), I have to say, and I’ve been beat by the cops. The level of racist violence from the settlers is kind of astounding. … The key thing was the kind of engagement that helped us better understand why the boycott is central… And part of what the boycott does is it delegitimizes the claim that this is a normal situation. It’s not a normal situation, it’s a settler-colonial situation, a situation of oppression.”[7]

The Palestinian people are denied elementary freedoms: the freedom of movement, the freedom to access their stolen lands and the freedom to protest injustice without facing brutal repression.[8] Those living in the Gaza strip (56% of whom are children) live under a debilitating siege, limiting their access to water, medical supplies, and construction material.[9] This unimaginable situation takes place only an hour away from your scheduled performance. In the East Jerusalem neighborhood of Silwan, 40 minutes away from the scheduled venue, children are being abducted from their homes, in violation of international law, and taken into violent police interrogations with no access to their parents or a lawyer.[10]

Representatives of Palestinian civil society, including over 170 different organizations such as women, academic and worker groups, have called for a boycott, divestment and sanctions (BDS) campaign against Israel’s policies. International artists are asked not to perform in Israel until it abides by its obligations under international law and reverses these policies.[11]

Some artists perform in Israel with the good will and intention to use their art as a means of changing Israeli public opinion and spreading the message of peace. One such example would be Roger Waters. These artists have later come to realize that their performance, as well-meaning as it was, has been hijacked and used to send a green light to the ongoing Israeli policies of oppression.

We have therefore learned that not performing is important to the promotion of justice in this region, as Israeli policy makers are coming to understand that the international community does not approve of their brutal policies towards the people of Palestine. Some prominent artists have stated:

Roger Waters: “In my view, the abhorrent and draconian control that Israel wields over the besieged Palestinians in Gaza, and the Palestinians in the occupied West Bank (including East Jerusalem), coupled with its denial of the rights of refugees to return to their homes in Israel, demands that fair minded people around the world support the Palestinians in their civil, nonviolent resistance. For me it means declaring my intention to stand in solidarity, not only with the people of Palestine, but also with the many thousands of Israelis who disagree with their governments racist and colonial policies, by joining a campaign of Boycott, Divestment, and Sanctions (BDS) against Israel, until it satisfies three basic human rights demanded in international law.”[12]

Faithless: “We’ve been asked to do some shows this summer in your country and, with the heaviest of hearts, I have regretfully declined the invitation. While human beings are being willfully denied not just their rights but their needs for their children and grandparents and themselves, I feel deeply that I should not be sending even tacit signals that this is either ‘normal’ or ‘ok’.”

Macy Gray: “I had a reality check and I stated that I definitely would not have played there if I had known even the little that I know now.”[13]

Cassandra Wilson: “as a human rights activist, I identify with the cultural boycott of Israel.” [14]

Understanding that the picket line has clearly been marked and that you cannot avoid taking a political stand on this matter, we are now asking you to take a moral stand. Please reconsider your participation in whitewashing Israeli apartheid. Stand against oppression and for liberation, against deep rooted racism and in favor of justice and equality for all.

Sign the petition to persuade Alicia Keys to cancel her date with apartheid
Join and share the Facebook page Alicia Keys: Don’t Be Fallin For Apartheid, Cancel Israel