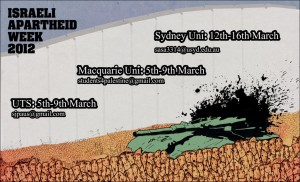 To accommodate various university schedules across regions, IAW will take place at slightly different times between February and March. Here is a list of dates for the regions confirmed so far:

Omar Barghouti: ‘Justice and equality only destroy their negation, injustice and apartheid, and this is precisely what Israel and its lobbies are running scared of, the effective and sustainable challenge of Israeli apartheid and colonial rule.’

I have experienced the checkpoint as an international, Muslim woman who wears the veil and observed the ignorant and mostly arrogant behavior of these young teenage soldiers. I am horrified, angry, and left paralyzed by confusion as I try to comprehend this behavior. I simply cannot imagine that the Palestinian people have to go through that every single day without having the possibility to leave as I do–without knowing that they can go home and are safe.

Does your Australia senator or MP care more about US interests than the welfare of Australian citizen, Julian Assange?
The roles of class and culture in racism toward Indigenous Australians. Essential reading.
Electoral funding figures show Labor’s donations collapse
“Each star is a US base. But just to be clear, Iran is the one that is threatening us.”