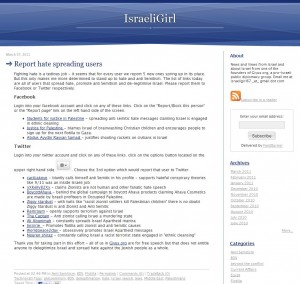 Fighting hate is a tedious job – it seems that for every user we report 5 new ones spring up in its place. But this only makes me more determined to stand up to hate and anti Semitism. The list of links today are all of users that spread hate, promote anti Semitism and de-legitimise Israel. Please report them to Facebook or Twitter respectively.Facebook

* Students for Justice in Palestine – spreading anti semitic hate messages claiming Israel is engaged in ethnic cleaning
* Justice for Palestine – blames Israel of brainwashing Christian children and encourages people to sign up for the next flotilla to Gaza.
* Abdus Ayydin Rayyan Samad – justifies shooting rockets on civilians in Israel

Thank you for taking part in this effort – all of us in Giyus.org are for free speech but that does not entitle anyone to delegitimize Israel and spread hate against the Jewish people as a whole.

What, then, does one do, when faced with one’s appearance on this ridiculous haet lsit? Why, message the perpetrator, of course 🙂

giyusgirl: @Jinjirrie anti-Zionism = no country for Jews = Jews are not entitled to their own country = Antisemitism . Enough said. #

This is not the first zionist haet lsit on which I’ve appeared – the JIDF have me on several of their puerile witchhunt campaigns also. For some of my historical brushes with them, see here.

Zionism is a secular political ideology which grew alongside other nationalist movements in the 19th century. Similar to some other nationalisms, zionism exhibits toxic symptoms of white supremacism in its colonialism – indigenous arabs were and are regarded largely as inconvenient sub-humans, to be expelled and exterminated whilst the entitled, privileged ‘race’ usurp their land. Racists like @giyusgirl see indigenous Palestinians in Israel and the Territories it occupies as excess humans, and that challenging this zionist ethnosupremacism and colonialism is ‘anti-semitic’. Yet *all* colonialism is chauvinistic, shored up by a sense of rightness, privilege and entitlement. The erroneous concept of ‘races’ is essential to racists who desire superior privileges for their own ‘race’. There is only one race, the human race, and all humans are entitled to equal rights, respect and dignity wherever they may be, wherever they were born.

@georgehale Get this: On Thursday’s “day of rage”, Israel settlers distributed threatening flyers to several diplomats in the West Bank. #

The Spectre of Democracy : All you need to know that is wrong with The Australian is in this picture:
Darkness at Noon: Bradley Manning
She’s back: Hanson to run