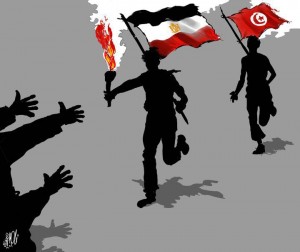 The roots of the Egyptian people’s revolution lie in the labour movement. It does not augur well that the ‘interim’ army rulers are intending to restrict worker meetings and strikes. In effect: ‘you won democracy so now give up one of democracy’s key tenets’.

‘Egypt’s new military rulers will issue a warning on Sunday against anyone who creates “chaos and disorder”, an army source said.

The Higher Military Council will also ban meetings by labour unions or professional syndicates, effectively forbidding strikes, and tell all Egyptians to get back to work after the unrest that toppled Hosni Mubarak.’
Egypt’s military to warn against “chaos and disorder”

In response, an action plan which builds on the original strategy:

@3arabawy: Everyone should start forming unions & labor associations now. If we don’t build those now, we’ll be fucked by the regime soon. #egyworkers #

@3arabawy: Army is now warning against strikes. Remember when army took over in 1952, 1st thing they did: executing 2 strike leaders in Kafr el-Dawwar. #

@stupiditytries what are they going to do??? shoot people? let them try. if people want to organize, they will (and they should). #

@jmayton: The military in #Egypt is not looking so “honorable” right now. Getting reports of people being roughed up by army. #Jan25 #

Egypt is now led by the Defence Minister and leader of the military, Hussein Tantawi.

Egypt’s new military rulers on Sunday suspended the constitution and dissolved a parliament dominated by the ruling party of former president Hosni Mubarak, after he was overthrown in a popular revolt. Skip related content

The Supreme Council of the Armed Forces’ “communique number five”, which was read out on state television, said a transitional period of military rule would last six months while reforms were put in place to allow free elections.

The council announced the suspension of the constitution and said it would “run the affairs of the country on a temporary basis for six months or until the end of parliamentary and presidential elections.”

It announced the “dissolution of the lower and upper houses of parliament” and said it would continue to issue decrees during the transitional period.

The legislative body was seen as illegitimate following elections last year that were marred by widespread allegations of fraud and gave Mubarak’s National Democratic Party (NDP) an overwhelming majority.

A committee will also be formed to oversee amendments to the constitution and a popular referendum will be organised to vote on the changes, the council said, in a bid to ease restrictions on presidential candidates.

“The head of the Supreme Council of the Armed Forces will represent the council domestically and internationally,” it said, stressing its commitment to international agreements.

What is to come?

@RamyYaacoub From @Ghonim ‘s meeting with Military leadership: Constitution amendment council might be pumping out amendments in 10 days #Jan25 #Egypt #

A double narrative of the Egyptian people’s revolution is emerging after the military assumption of power : one is the solid perspective from the Egyptian trade union movement which built and is maintaining the revolution, and the other from the middle class represented in western media by Google executive Wael Gonim which responded in self-interest to the killing of middle class Khaled Said, attributing much of the revolution’s success to twitter and facebook and which now feels appeased. The alliance between the working class and bourgeois has proved a winning combination, but let’s not forget where the revolution started and continues – in the grassroots trade union movement.

Indeed, Israeli officials appear to have little sympathy for the democratic aspirations of citizens in Arab states. As Gabi Ashkenazi, the outgoing Israeli army chief, was quoted by Israeli media as saying last week: “In the Middle East, stability is preferable to democracy.”

RT @crowdleaks: Search through all the #hbgary emails using the #crowdleaks search tool http://ping.fm/Vi7dg
For those who may be interested, got a response from @JuliaGillard to the open letter about #Assange.

1988 Anti-Bicentennial Cartoon Book
Remove Schedule 2 of the FaHCSIA and Other Legislation Amendment Bill 2010
In Australia, a Fight Over Aboriginal Lands
Australia is the same as Israel – without guaranteed equal rights, all rights can be compromised by the majority racist government. Australia desperately NEEDS a Bill of Rights for real equality and justice.

One Reply to “The Egyptian Revolution Continues”