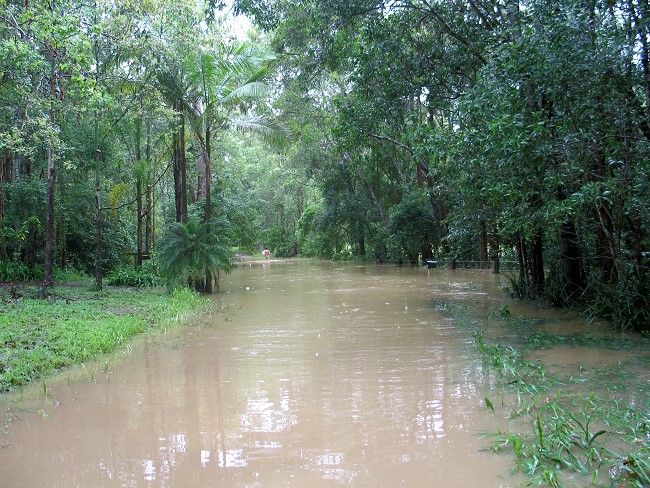 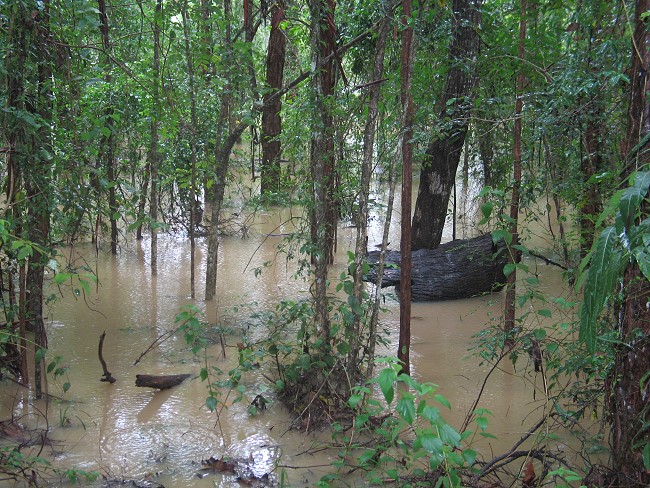 In our drenched little paradise, we have plenty of supplies to survive weeks of isolation if necessary and are situated well above the creek below. With luck, the power will stay on!

My father did the first comprehensive scientific Australian study based on all available historic rainfall measurements. I asked him many years ago whether anthropogenic effects were more dominant than solar cycles. He refused to give a definitive answer. Theodor Landscheidt predicted solar and climate cycles of 36 years give or take a bit. It’s now 37 years since the 1974 Brisbane deluge. In his last paper, Landscheidt also predicted a new little Ice Age, with the Gleissberg minimum occurring around 2030.

We need not wait until 2030 to see whether the forecast of the next deep Gleissberg minimum is correct. A declining trend in solar activity and global temperature should become manifest long before the deepest point in the development. The current 11-year sunspot cycle 23 with its considerably weaker activity seems to be a first indication of the new trend, especially as it was predicted on the basis of solar motion cycles two decades ago. As to temperature, only El Nino periods should interrupt the downward trend, but even El Ninos should become less frequent and strong. The outcome of this further long-range climate forecast solely based on solar activity may be considered to be a touchstone of the IPCC’s hypothesis of man-made global warming.

Of course, if humans don’t change their habits now, the resultant combined heating from solar and anthropogenic effects after 2030 might turn out to be catastrophic.

During natural crises like these, one can’t help but think of Dorothea MacKellar’s iconic settler colonial poem, which I’ve always detested.

The love of field and coppice,
Of green and shaded lanes,
Of ordered woods and gardens
Is running in your veins.
Strong love of grey-blue distance,
Brown streams and soft, dim skies –
I know but cannot share it,
My love is otherwise.

I love a sunburnt country,
A land of sweeping plains,
Of ragged mountain ranges,
Of droughts and flooding rains.
I love her far horizons,
I love her jewel-sea,
Her beauty and her terror –
The wide brown land for me!

The stark white ring-barked forests,
All tragic to the moon,
The sapphire-misted mountains,
The hot gold hush of noon,
Green tangle of the brushes
Where lithe lianas coil,
And orchids deck the tree-tops,
And ferns the warm dark soil.

Core of my heart, my country!
Her pitiless blue sky,
When, sick at heart, around us
We see the cattle die –
But then the grey clouds gather,
And we can bless again
The drumming of an army,
The steady soaking rain.

Core of my heart, my country!
Land of the rainbow gold,
For flood and fire and famine
She pays us back threefold.
Over the thirsty paddocks,
Watch, after many days,
The filmy veil of greenness
That thickens as we gaze.

An opal-hearted country,
A wilful, lavish land –
All you who have not loved her,
You will not understand –
Though earth holds many splendours,
Wherever I may die,
I know to what brown country
My homing thoughts will fly.

How much richer are the words of Oogderoo Noonuccal (Kath Walker)

Gumtree in the city street,
Hard bitumen around your feet,
Rather you should be
In the cool world of leafy forest halls
And wild bird calls
Here you seems to me
Like that poor cart-horse
Castrated, broken, a thing wronged,
Strapped and buckled, its hell prolonged,
Whose hung head and listless mien express
Its hopelessness.
Municipal gum, it is dolorous
To see you thus
Set in your black grass of bitumen—
O fellow citizen,
What have they done to us?

And my own contribution:

We share this land of timeless dreams,
mysteries of tree and bone,
tribal journeys of dance and song
symbols painted on stone.
Songlines of the indigenes,
they used to call it home,
broken by colonial greed
the land had never known.

We poison lakes and dam up streams,
this land that is our home,
quarry the hills and cut down trees,
don’t know how to leave it alone.
Why do we break this fragile land
and bring it to its knees?
Our eyes are blind with dollar signs,
so much that we should see.

Do you fear the force of machinery
and big money lying?
it’s hard to live guilt-free
when the country’s dying,
All that’s part of you and me
laid waste by greed and scheming,
don’t you know we’ve taken enough,
Let the land lie dreaming.

Below are some links for people who are in flood prone areas near Brisbane – please seek high ground in advance because the floods have not yet peaked and may be higher than 1974. Look after your neighbours and keep safe.

New images: Flooding around Ipswich Update 3.55pm
Happy birthday, mum, I love you. I’ll come help clean up as soon as I can get through
Follow the Sun to the Landscheidt Minimum
New Little Ice Age Instead of Global Warming?
SOLAR ACTIVITY: A DOMINANT FACTOR IN CLIMATE DYNAMICS
Theodor Landscheidt
Landscheidt Cycles Research

Richard Falk: Israel’s Violence Against Separation Wall Protests: Along the Road of STATE TERRORISM
Why it will be said one day that anti-Zionists had a better grasp on 20th C history than Uri Avnery or Tom Friedman
Palestinians in Gaza face health crisis
What happens when Arab money gets too close to the Jewish cause?
ZOABI: There can be no coexistence with a racist consensus
Jonathan Pollak : Shameful imprisonment : Non-violent demonstration is not merely the right of every citizen, but also the duty of everyone who wishes to fight against wrong.
In Defence of Archbishop Emeritus Desmond Tutu
Fox News, Glenn Beck & The Jews