Veteran reporter, 89 year old Helen Thomas created a massive kerfuffle with her radical comment that “They”, the Israel referred to by her interlocutor, should go back where they came from – and Steve Colbert’s subsequent exposure of zionist maleficence is superb and beyond reproach. 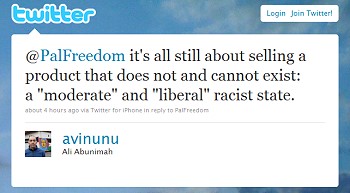 It’s significant to inveterate cynics like myself that the subject incident occurred on May 27 but wasn’t broadcast and magnified by the rightwing zionist media machine until several days later, after the indiscriminate zionist attack on humanitarian aid workers on board the Freedom Flotilla in international waters, killing 9 and wounding more than 30 people.

Although her comments were badly phrased and unfortunately vulnerable to misuse by the ziolobby, and it also seems significant that they were spun, she never said precisely ‘jews should leave Israel’ though was repeatedly quoted in the media as if she did.

To quote prominent Palestinian activist Ali Abunimah ‘it’s all still about selling a product that does not and cannot exist: a “moderate” and “liberal” racist state’.

Thus the media kerfuffle and public diversion is a distraction from the real major issues at hand, which are the horrendous illegal blockade which Israel maintains over the people of Gaza for its dubious ‘self-defence’ in the light of its horrific , oppressive 63 year apartheid inflicted upon the indigenous, dispossessed Palestinians, whose rights are spun by their oppressor as conditional upon their accepting the ‘right’ to ‘exist’ of the vile racist entity which inflicts brutal Occupation upon them and which has usurped their land without their consent.