Israel is still proving intransigent and all too willing to wreak further collective punishment after their massacre of the Gazan people. 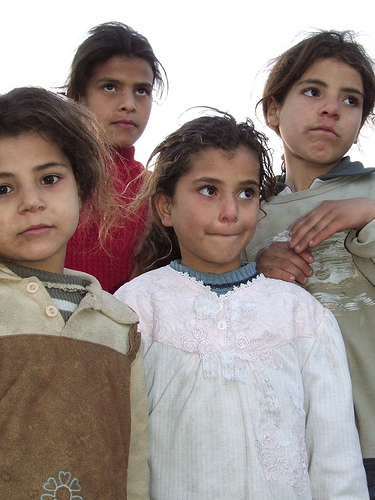 On 6th January nearly 30 members of the Al-Samouni family were killed when a house was attacked by Israeli forces in the Hai Al-Zaytoun district of Gaza City. The area was inaccessible until Israeli troops withdrew about 2 weeks later, when rescue teams were able to recover the bodies and the full extent of the atrocity was revealed (see Al-Haq report: www.alhaq.org/etemplate.php?id=416).

Footage below contains an interview with 10 year-old Mona Al-Samouni, survivor of the massacre who lost both her parents in the attack and 13 year-old Shaima Al-Samouni. Photos show children from the Al-Samouni family and a destroyed chicken farm next to their home.

The BBC’s Jeremy Bowen follows Mona Al-Samouni on her first day back to school:
news.bbc.co.uk/2/hi/middle_east/7849376.stm

RAMALLAH, 27 January 2009 (IRIN) – Aid agencies have been protesting about their restricted access to Gaza since the 18 January ceasefire, stressing that the full opening of crossing points is crucial for the delivery of humanitarian aid.

“It is unacceptable that staff of international aid agencies with expertise in emergency response are still not given full access into Gaza, and that the crossings are not fully operational for humanitarian and commercial goods,” said Charles Clayton, chair of the Association of International Development Agencies (AIDA), which includes 75 agencies.

A recent CARE survey found that 89 percent of Gazans had not received humanitarian assistance since 27 December, underscoring the clear need, according to CARE, for more aid and humanitarian workers in Gaza.

CARE officer Juliette Seibold in Jerusalem told IRIN by phone on 26 January that eight of their staff members were still waiting for permits to enter to Gaza.

“If the ceasefire is holding, then any blockage of humanitarian access is unacceptable,” said Clayton.

The Israeli authorities are permitting 100-120 trucks to enter Gaza per day, according to the head of UNRWA (the UN agency for Palestinian refugees) in Gaza, John Ging.

However, “to meet the daily needs, hundreds of trucks are required,” he said, adding: “This is the same approach that led to this conflict. We need a change of policy regarding the crossing points. If they remain closed it will lead to more violence.”

Construction materials and spare parts are vital to repair damaged schools, hospitals, water and sewage systems, and power lines, but “these commodities are not available on Gaza’s market,” Oxfam spokesperson Sara-Eve Hammond, based in Jerusalem, told IRIN by phone, “and the Israeli authorities are waiting for specific donor requests to allow their entry.”

Hamas, which controls Gaza, has set lifting the blockade – imposed on the impoverished coastal territory by Israel and Egypt since Hamas took power in June 2007 – as a condition for an Egyptian-brokered truce with Israel.

“Hamas has called for a complete lifting of the blockade and an opening of all the crossings,” said Hamas spokesman Ayman Taha in Cairo.

Over 4,000 residences were completely destroyed and 17,000 were partially damaged, according to preliminary estimates by the Palestinian Central Bureau of Statistics.

Although Israel has continued to shell Gaza daily with its naval gunboats since it declared a unilateral cease-fire, it is blaming Hamas again for cease fire breaches. A bomb has exploded on the border, killing one IDF and wounding 3 others.

Although there was no claim of responsibility for Tuesday’s attack, Mushir al-Masri, a Hamas leader, said Israel was to blame for continuing to fire into Gaza. Al-Masri said his group had not agreed to a full cease-fire but only to a lull in fighting.

“The Zionists are responsible for any aggression,” he said.

Israel has warned that it would respond harshly to any violations of the cease-fire, which ended the Israel Defense Forces’ 22-day offensive against Hamas in Gaza.

Witnesses said that Israeli troops also took over a house there which is near the Gaza Israeli borders.

YNetnews spews its devious version of the bomb event:

The attack on an IDF force patrolling the Gaza border earlier on Tuesday was carried out by a cell belonging to the Worldwide Jihad. An IDF tracker serving with the Gaza Division’s southern brigade was killed and three additional soldiers were seriously wounded. The name of the tracker, a Bedouin from Rahat, is being withheld at the request of his family.

The IDF believes that the cell behind the attack is an extremist pro-Iranian group, which espouses a militant ideology that surpasses even Hamas’ positions in its opposition to Israel. The group receives direct support from Tehran, but is connected in various ways to Hamas as well.

The army says that even though the attack was executed by this group, Hamas was involved and at the very least gave its consent to the plot.

Later in the afternoon the IAF targeted one of the perpetrators of the attack in the southern Gaza town of Khan Younis. Hussain Abu Shamia, a prominent operative belonging to the Worldwide Jihad, was confirmed injured in the strike. However military officials believe that Israel must broaden its response to the attack in order to deliver a stronger message to Hamas that Israel will not tolerate such violations of the ceasefire.

The army has prepared a number of options for retaliatory action and is now waiting for a green light from the political echelon.

Military sources estimates that Hamas will continue using other organization to operate through in an effort to minimize Israel’s response against its ranks and infrastructure but rather only against the smaller armed groups in Gaza. Senior officials said on Tuesday evening that they see Hamas as solely responsible for the attack, and have no intention of playing along with its scheme to evade responsibility.

I checked the Ramattan site and could find no reference to the IDF allegations above.

The relevant story on the Ramattan site reads as follows:

Gaza, January 27, 2009, (Ramattan)- One Israeli soldier was killed and three others wounded on Tuesday in an explosive device east south of Khanyounis, Israeli sources told Ramattan.

Spokesperson of the Israeli army, Avechai Edrei, told Ramattan in a phone call that the Israeli soldiers was instantly killed and three others carried to hospital, one in critical case.

He pointed out that a shell was shot at Palestinian militants after the explosion which targeted an Israeli military vehicle.

Palestinian medical sources said that a Palestinian farmer was killed on Tuesday morning by the Israeli occupation forces in the southern Gaza Strip city of Khanyounis.

Gaza, January 27, 2009, (Ramattan)- A Palestinian farmer was killed on Tuesday morning by the Israeli occupation forces in the southern Gaza Strip city of Khanyounis, medics and witnesses said.

The gunshot was heard after a huge explosion shaken the area near the borders.

Israeli army office told Ramattan that an explosive device blew up while an Israel patrol was combing the area.

No sign of any new ‘iranian militant group’ or ‘Jihad and Tawhid Brigades’ on Ramattan in English at least – perhaps in Arabic?

The Ynet story reeks of propaganda – for starters, Iranians are Shia, Al Qaeda is Sunni. More likely the Israeli propaganda machine is attempting to conflate Al Qaeda with Iran, Hamas and whoever else they can think up in order to demonise what was more likely an IDF jeep running over an unexploded IDF shell or IAF bomb.

Haaretz spins the ‘bomb’ another way:

A preliminary investigation revealed that the soldiers were patrolling an area that had not been patrolled for several weeks due to the fighting in the Strip. The regional brigade commander was apparently not apprised of the patrol, which was approved by the battalion commander. IDF sources said the Palestinians who planted the bomb did so Monday night, under cover of heavy fog.

The closure of the Gaza crossings is only the first stage of Israel’s response to the attack, Amos Gilad, who heads the Defense Ministry’s political bureau, said yesterday. “The equation in the Strip has changed,” he said during a lecture at the Institute for National Security Studies in Tel Aviv.

From the ABC Australia:

Hamas spokesman Mushir al-Masri said Israel was to blame for continuing to fire into the Gaza Strip despite the ceasefire.

“We stress that the Zionist enemy has not stopped behaving aggressively in Gaza since the unilateral ceasefire. To have calm means lifting the siege and reopening all the border crossings, including the Rafah crossing. The Zionist enemy bears the full responsibility for any violent developments,” he said.

There was no claim of responsibility for the attack.

It was not clear if the bomb had been planted after the cease-fire took hold or whether it was an older device.

Israel has reverted to starving the Gazan people – how evil and cruel can Israel be before the world rejects it en masse?

Officials and volunteers in Egypt blame the Israelis, saying that even before the passage stalled Israel had allowed supplies to pass through for only 19 hours each week. Israeli officials said that Egypt had not done enough to coordinate the flood of aid coming to Gaza, and that they hoped a system would soon be in place to remedy the problem.

Mu’awiyah Hassanain, director of Ambulance and Emergency Services, reported more shelling in the north-western coastal area As Sudaniya the same morning. Five fishermen were injured in the attacks, he said.

About 9.45 a.m. that morning in Sheyjaiee district to the east of Gaza city, seven-year-old Ahmed Hassanian was outside his house with friends when Israeli soldiers fired from the eastern border. A bullet lodged in his brain, causing brain haemorrhage. Dr. Fawzi Nablusi, director of the ICU at Shifa hospital, says the boy is not expected to survive.

Three Palestinians have been killed since the ceasefire and 15 injured, including the ten injured Jan. 22, according to both Mu’awiyah Hassanain and Dr. Hassan Khalaf.

Hours after the ceasefire was said to have come into effect Jan. 18, Israeli warplanes flew extremely low over areas of Gaza. Drones capable both of photographing and of dropping targeted missiles continued to circle overhead. At 8.30 am Jan. 18, one of these drones dropped two missiles in the Amal area east of Beit Hanoun, killing 11-year-old Angham Ra’fat al-Masri and injuring her mother.

The Palestinian Center for Human Rights (PCHR) reports further violations of the ceasefire, including the killing of Maher abu Rjaila, 23, shot in the chest by Israeli troops at 10.40 am Jan. 18 as he walked on his land east of Khan Younis city.

Israeli soldiers fired on residents of Al-Qarara, near Khan Younis, at 1 pm Jan. 20, shooting Waleed Al-Astal, 42, in his right foot.