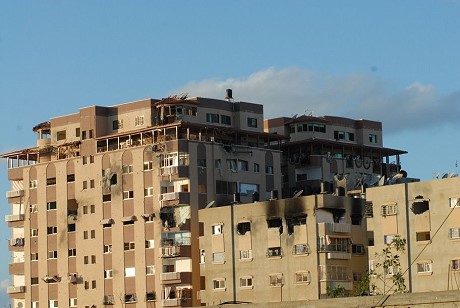 The master’s fury at its slaves is spent, the angry fire of rebellion rekindled with blood of innocents. Self-rightous rage ebbs from the land to reveal foetid detritus strewn throughout the enclave of the Nazgul’s chastised slaves.

Al Jazeera tours through villages pillaged and destroyed by troops in their blooding initiation rites, homes from which occupants fled before the Occupier’s flail. 22,000 homes were raised in all in 22 days of intense target practice and thrilling collective punishment. 50,000 displaced people are crowded into 50 emergency shelters – mostly in unused schools. Some 400,000 Gazans have no access to running water according to the UN, the impotent international body still oedipally maligned by the rogue state. The Nazgul has no pity, it ignores the world’s opprobrium, discards and distorts the offers of the slaves, punishing ritualistically en masse in wrath, all civilised principles abandoned in deference to the memes of might – the Nazgul’s ‘right to exist’ and ‘right to defend itself’, while under Occupation, its slaves are denied both. The Nazgul has a ‘right to the land’, and the indigenous slaves are permitted to remain till their exit by death or till desired territory can be acquired from them in some new treacherous act.

And why not? against this unjust colonial enterprise there exists no unified voice of restraint. The Nazgul long ago learned to rule the greatest nations from within and afar. Although the slaves were granted democracy by the largest ally, next time they may be more careful to vote for whom the Nazgul favours to avoid delegitimisation and demonisation for daring to choose representatives who refused to recognise the validity of the master’s land claim before the extent of the claim is known.

How dare the Occupied slaves exercise their democratic vote and elect a party which confronted the overlord with the audacity to seek freedom and land rights?

The master had no intention of defining its borders when thee was still a chance to expropriate more land. It didn’t matter whom the slaves chose as leaders, for the Nazgul had many accumulated tacts to stymy their slaves’ prospects for true self-government, land and peace when any prospect for reconciliation approached. How ieasy ir was to cast the slaves as expendable miscreants, undeserving even of the small residue of land onto which the Nazgul had driven them years before. The repeated Nazgul lie of superior entitlement combined with validation of the use of force to take land expedited the transfer, gradually, of most of the land belonging to the slaves when the Nazgul settlers first arrived. To appropriate the remaining portions and so it could feel completely invincible, the Nazgul knew it would have to make its slaves accept defeat, utterly submit to foreign rule in their own land, Then the slaves’ bond to the land might be weakened, easing the way for eventual total ownership. The process of marginalisation of the slaves became a virulent form of apartheid on a grand, mythological stage.

Now the Nazgul’s assault has eased – in preparatory celebrations for the new President’s inauguration, everyone is holding their breath, waiting to exhale in freedom. Is there any cause for hope, when Obama’s pantheon already sports powerful representatives of the Nazgul, ready to take up their scourges in concert with their sovereign.

Yet today is Martin Luther King Day – so we will celebrate a man of wise, kind words which cannot be drowned in baleful lies and slaughter.

There is nothing except a tragic death wish to prevent us from reordering our priorities so that the pursuit of peace will take precedence over the pursuit of war.

Still the mighty bed down together and the concerns of the weak are of little interest in great matters of state.

The Nazgul will notch up some lovely arms sales from its lethal, impressive pyrotechnic display – featuring savage new products –Small Diameter Bombs, Spike missiles, Bunker Buster bombs and sleek new Drones . The cleanup of Gaza is the best payoff of all – rebuilding contracts worth $1.9b, the cost covered by the usual sucker donor nations – payment for their ticket to the fireworks, in truth paid for with Palestinian slave blood.

This time Israel has gone too far – it faces the global force which healed apartheid South Africa. Whether governments wish it or not, there is no will stronger than the combined voice of the world crying out for justice and love.

Has Israel achieved its goals in Gaza? It depends

Children found with bullets lodged in their head

Jews Against the Occupation Protest Along the Holiday Road

JATO activist Jacob Kurtzberg said, “Martin Luther King taught that we could not wait for civil rights and equality to be handed to us. In New York and in Palestine, we’ve learned that can’t wait for our governments to object to these wrongs—it’s up to us to raise the alarm.”