During the current grotesque, vastly unequal confrontation, about 460 Palestinians have lost their lives with more people buried and unidentified beneath toppled buildings. Last time Israel punished its hapless, impoverished Gazan neighbours, it killed more than 700 people. But this time, the world is watching keenly – will the bar be lifted? does the sociopathic Israeli propaganda machine imagine they have sufficiently brainwashed the world to accept even graver and greater atrocities? this is how Israel conducts its election campaigns – with Palestinians used as expendable human pawns for bloodthirsty oneupmanship within the Israeli elite. 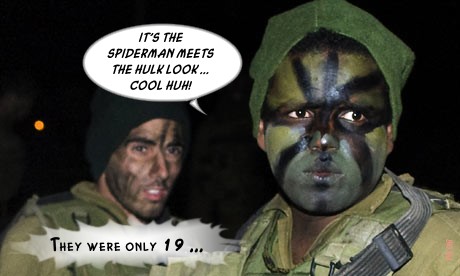 While Israel’s monstrous bullying may play well to short-sighted, enraged members of the Israeli public who support violent non-solutions that inevitably blowback against them and potentially the rest of the world as well later, it will not wash with people within Israel and without who are better informed and innoculated against Zionist mock tantrums. The numbers of people who are aware of Israel’s bad faith are growing, despite the collusion of the western media with its deceitful narrative. Those in charge of the Israeli propaganda machine however, may not perceive this.

I fear and feel for the people of Gaza, made scapegoats again as Palestinians have been for 60 years while the world has remained hamstrung by an Israel occupied US. It’s way past time that Israel should declare its borders on the pre 1967 Green Line, give Palestinians back their land, compensate refugees, release prisoners and become good neighbours – if they fail to do this, the time will rapidly approach when the rest of the world, including the US, rejects them as soundly as it did the apartheid regime in South Africa – the US was the last major nation to condemn them as well.

Gaza invasion starts: Refugee camp with ISMers in it shelled by tanks

UN Gaza Humanitarian Situation Report for 3 January 09 – just horrific. Read it for yourself, I’m choked up by the awful inhumanity contained therein directly caused by Israel’s vicious blockade, consequent bombardment and now ground ‘offensive’ being peddled as ‘defensive’ while their satraps posture with weasel words that it’s not their fault. Alternate pdf download link here.

Bush repeats the same lie as the Israeli hasbara when in fact it was Israel who breached the cease fire with Hamas on November 4 last year.

Meanwhile in the UN:

Riyad Mansour, the permanent Palestinian observer to the United Nations, told reporters that it was the council’s responsibility “to bring Israel into compliance and to stop this aggression immediately”.

“Israel cannot continue to behave as a state above international law – this is the law of the jungle,” he said.

A statement issued by his office said Mr Ban had spoken with Israeli Prime Minister Ehud Olmert and “conveyed his extreme concern and disappointment”.

“He is convinced and alarmed that this escalation will inevitably increase the already heavy suffering of the affected civilian populations,” the statement said.

Who fires those primitive rockets anyway? would Israel run another of its infamous false flag operations to create a pretext for a Gaza invasion?

What can Israel hope to achieve with its disgraceful, deceitful incursion

Even the best outcome for Israel is grim. If the Israeli military invades Gaza on the ground to wipe out Hamas and its military infrastructure and Egypt does not allow Hamas fighters to escape to its territory, the Arab grievance will likely merely morph into a more angry and virulent form after the almost certain eventual Israeli withdrawal. Alternatively, if Hamas is not completely wiped out – either because some fighters successfully melt back into Gaza’s population or because Israel merely threatens a ground invasion but doesn’t follow through – Hamas’s stature will grow in Gaza and the Arab world for successfully withstanding the Israeli goliath – as Hezbollah’s did after the Israeli onslaught against and withdrawal from Lebanon in 2006.

Instead of making peace with the Palestinians and Syrians by eliminating the underlying grievance and giving back their land, or at least answering minor provocations with limited tit-for-tat responses, Israel will likely continue flailing disproportionately against its enemies. This Israeli government policy will make the long-term security situation worse for the Israeli people – with the United States subsidizing and giving the green light to such irresponsible behavior. Same stuff, different year