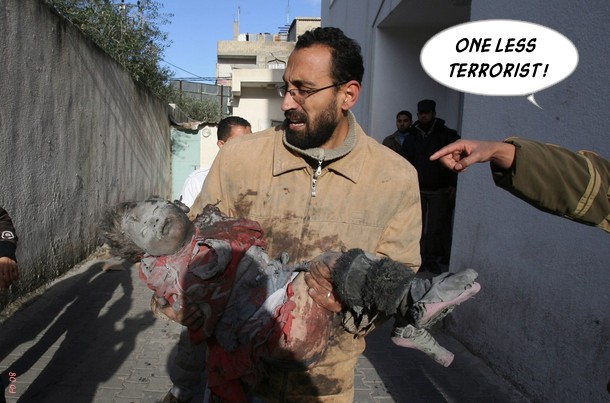 Nizar Rayyan was killed along with eighteen other people, including members of his family. Nice going, Israel, 18 innocent people killed to assassinate 1 unarmed public official. Another 25 people were wounded. Surely that couldn’t be a disproportionate response?

Prior to striking Rayyan’s house the IDF tried to warn his family about the imminent attack and urged them to evacuate the place, but they refused to do so.

The IDF decided in its usual ‘moral’ way

… regarding the legality of striking homes used as weapons storages when sufficient warning is given to the residents. It has been decided that this falls within the boundaries of international law and is therefore legitimate.

Israel’s actions, along with being barbaric, are incendiary. As Richard Silverstein says:

For every Rayyan Israel kills, 1,000 will take his place. And they will not only be mere soliders in the conflict. Some of that 1,000 will outdo Rayyan in devising ever greater acts of revenge against Israel for this travesty. So has it been in the past and so will it be till the ends of time or of this conflict, whichever comes first.

In the case of armed conflict not of an international character occurring in the territory of one of the High Contracting Parties, each Party to the conflict shall be bound to apply, as a minimum, the following provisions:

1. Persons taking no active part in the hostilities, including members of armed forces who have laid down their arms and those placed hors de combat by sickness, wounds, detention, or any other cause, shall in all circumstances be treated humanely, without any adverse distinction founded on race, colour, religion or faith, sex, birth or wealth, or any other similar criteria.

To this end, the following acts are and shall remain prohibited at any time and in any place whatsoever with respect to the above-mentioned persons:

(a) Violence to life and person, in particular murder of all kinds, mutilation, cruel treatment and torture;

(b) Taking of hostages;

(d) The passing of sentences and the carrying out of executions without previous judgment pronounced by a regularly constituted court, affording all the judicial guarantees which are recognized as indispensable by civilized peoples.

The Occupying Power shall, with the cooperation of the national and local authorities, facilitate the proper working of all institutions devoted to the care and education of children.

Perhaps they interpret Article 53 as justification for their wanton slaughter of civilians and destruction of civilian buildings in Gaza.

Any destruction by the Occupying Power of real or personal property belonging individually or collectively to private persons, or to the State, or to other public authorities, or to social or cooperative organizations, is prohibited, except where such destruction is rendered absolutely necessary by military operations.

Israel’s military plans are to annihilate the support for and existence of the democratically elected Hamas government. Their scope has creeped to include the destruction of all public buildings, private workplaces, killing and / or enforced homelessness of all whose homes are suspected military targets – perhaps being a Hamas voter is enough – democratic governments after all rule by consent of the people. Look, a Hamas voter! they probably have weapons in their home. Ring, ring … hello … you have 10 minutes to vacate the premises before BOOOOOOM! have a nice day.