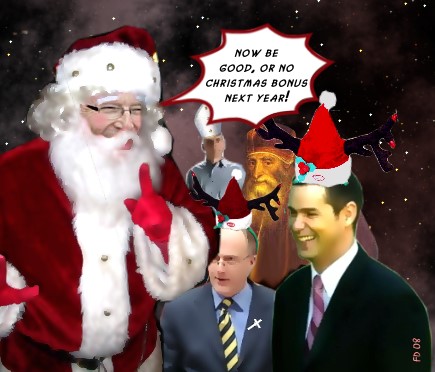 with new laws with worrisome wording:

This current internationally accepted definition of terrorism (as seen in e.g. New Zealand’s Terrorism Suppression Act) includes acts which are carried out for the purpose of “induc[ing] terror in a civilian population” – but it still requires that they cause death, injury, or serious destruction. So, in order to be “terrorism”, it has to involve killing people or blowing stuff up. Allowing psychological as well as physical harm runs the risk of substantially lowering that threshold, allowing the misclassification of other offences as “terrorism”, with all that that entails. Given that anti-terror laws are already overused, that would be a Very Bad Thing.

In view of the sinister scope creep which is becoming characteristic of the Rudd government, let’s consider what might fall under the new Act’s ambit – like the incessant terrifying media reports of recession / depression we’ve come to know and loathe and which proved a self-fulfilling prophecy over the past year or so. What about religious preaching that induces psychological terror in congregations through threats of eternal fire and brimstone for transgressions? then there’s Santa Claus – he knows when you’ve been good or bad, so be good for goodness sake!

More pertinently, what about when government attempts to manipulate its electors into accepting a nanny state by implying that those who don’t back net censorship are pedophiles?