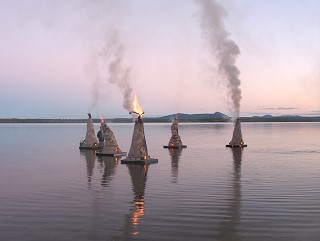 The delusional premier of Queensland threw a complete wobbly at the state he rules from afar by decree of Commission. The current lofty Commission has declared 156 local subject Councils shall be reduced to a scanty 72. Deliberations commenced a mere 3 months ago in April, and there is to be no community consultation or followup regarding the Commission’s high and mighty decisions, with affirming legislation expected to be swept through within a couple of days. This is government by dictate. Commission member Terry Mackenroth must be rubbing his greasy mitts together in anticipation of his juggernaut Devine Homes marching up the coast. Talk about a conflict of interest.

Effectively for Noosa dwellers such as ourselves, with Noosa Council to be lumped in with the development crazed Maroochy and Caloundra Shires, our representational bang for a buck will be divided by 6, with the Sunshine Coast Regional Council having a mere 12 representatives. The development sharks will be quaffing buckets of champers for joyful weeks, arms linked with their respective political sponsors. The Local Government Minister, Andrew Fraser, whooped gleefully:

Yep, mate, we know, we know. We remember the good ole Joh days too.

The Commission shows how abysmally out of touch it is in its report:

The region has many environmental, scenic and recreational amenities and is a major local, national and international tourist destination. The maintenance and management of these attributes and faciliities have evolved in ways that are both different because of council philosophies, but similar because of the need to provide protection of the environment and the amenity of the area for residents and visitors alike. These are amenities which are important to each of the existing local governments and in the Commission’s view, are best managed on a regional basis to ensure the actions of one council do not compromise the environmental quality or amenity of its neighbour.

Just how amalgamating with the repulsive development hungry slumlords of Maroochy can protect the Noosa environment from developers’ predations with much reduced and removed local government representation beats me.

Looking at the figures, it’s Maroochy and Caloundra who will be mooching off Noosa income wise also. They spent their environmental and eco-tourism capital years ago on monstrous wastelands of coastal suburban slums, particularly the ravenous Maroochy wolves. But let’s not, of course, forget the oh so charming Currumundi pits – that classic beach haven for single parent junkies.

Another howler by the Commission is equally ludicrous … that somehow because the Sunshine Coast Airport is in Maroochy Shire, all tourist goodies must flow from there.The Maroochy airport is *not* and will never be the gateway to Noosa. Why are they unaware that the majority of tourism to Noosa is from Brisbane and does not arrive by air. Why are these dolts obsessed by a mode of transport which shortly will become too expensive for all but the very rich? Should they not be focussing on rail? I think the Commission unconsciously reveals its true concern in their first recommendation summary:

Yep … they know amalgamation will mean carte blanche for the big boys to move right in and to wreck the place with no local representation of locals’ wishes to stop or affect whatever major economic development (read Titanium Springs and the like) is proposed. We all know how sensitive the Maroochy Council is to the environment – gone is the Obi Obi, sacrificed to the algal blooms of Lake Baroon, and the tourist traps of Montville, Flaxton and Mapleton are wall to wall southern geriatric waiting room horror. The wetlands behind Coolum, Maroochy and Kawana …. either canal estate disaster zones or bulldozed for non canal estates. And we should trust an amalgamation with these environmental vandals? Maybe we should just submit wearily now and turn it all into one gigantic nursing home for aging southerners.

I spat off the following missive to our detestable state premier, who lost my support some time ago over the Traveston swamp debacle, when he first revealed himself to be a tool of southern development sharks.

I have been a resident of Noosa Shire since 1976 and was born in Queensland. I met you in
the late 70s at an ALP function and thought you would make a fine Queensland leader then.
You seemed decent. Where is that decency now?

I never thought I would see the day when a Labor Party State government would foist an
undemocratic, ill-considered amalgamation on a unilaterally opposed Noosa community.

We in Noosa value our difference, our community identity and our environmental uniqueness.
Our area deserves special protection from the predations of property developers – their only
concern is making money from the invasion of (predominantly aged and social services
needy) southerners which your government, ironically in similar shortsighted fashion to the
tyrannical Bjelke Peterson regime, appears bent on encouraging here to the detriment of the
environment in south east Queensland, its natural resources on which the current population
depends and the enjoyment of life of those such as myself who were born here.

You are making things worse, not better, Mr Beattie. For folks like me, who have fought for
years to protect Noosa from the ravages of property sharks, your latest blunder is the last
straw. For this, you and your co-conspirators will not be forgiven unless this bleak, foolhardy
amalgamation is overturned.

You must ask yourself, Mr. Beattie, in whose interest are you really acting and to whom are
you responsible in our supposed representative democracy? Queenslanders such as myself,
who live in Noosa, or insatiable development companies for whom enough “growth” is NEVER enough,
who wish to prey on the property needs of future hordes of southerners which you, and not
we, seem keen to allow to pillage the unravaged remainder of the southern part of the state until
the golden goose has been cooked and picked to the bones.

Sacrificing the needs of individuals and their communities for the so-called “greater good”
rings reminiscent, hollow and forboding, Peter.

I have voted Labor all my life, and now, after the ongoing fiasco of the Traveston swamp, and
this abominable amalgamation which will severely diminish my democratic electoral
representation, your dictatorial actions have changed my vote.

For it is government which loses sight of the legitimate democratic interests of individuals and
the communities in which those individuals live, which prances blindly down the road to
totalitarianism and which has itself become illegitimate. I would patently be better served with
more satisfactory democratic representation by a more democratic institution if the
Queensland State Government was abolished rather than the Noosa Council.

Correctly, you seem to have great interest in the rights of Dr Haneef, a foreign national. Yet
the concerns and futures of individuals who elected you in this State, who were born here
and who have lived here all their lives are trampled on with a bureaucratic stroke of a pen.

By your own disgraceful, fascistic actions, *you* and your Party are now the enemy. You have
lost my vote. And worst of all, in your rush to deliver another windfall profit stream to the
corpulent unethical predators of our environment, you may well cost Kevin Rudd the Federal
election.

Do the decent thing, please, Peter and restore my trust and admiration.

Let the individuals who live in Noosa and the Noosa community be what they want to be and
not what you, the Property Council and its various avaricious sycophants and leeches want
them to be.

Otherwise, it will be many many years before an ALP member is elected in this region again.

Not that, of course, unrepresentative, out-of-touch, heading off the rails toward fascism governments give a stuff about what their electorate wants. One still must try.

If we’re properly over the flu by Friday, we’ll be attending the rally against amalgamation and fascism in Brisbane at 10.30 a.m. at South Bank. More details here – and you can also see a visual comparison of the foreshores of Maroochy and Noosa Shires which make it blindingly obvious which is environmentally conscious and which is a slum.

Later today after his meeting with coast mayors, Beattie weasels in a futile attempt to placate those like myself.

The 45-minute meeting was closed to the media, but the Premier said afterwards that he had promised to protect Noosa, including retaining its current population cap and ensuring it did not face wholesale, high-rise-type development. Any major changes to planning schemes would have to be approved by the state government, he added.

Mr Beattie also confirmed he will not budge on his Friday deadline for the mayors to make a decision on whether they want separate divisions within the new regional authority or would prefer to head to the polls in March without internal boundaries.

C’mon, Peter, you can do better than that. Your sootheing nothings about changes having to be approved by the state government don’t impress me. And do you mean to say we will be facing small scale high rise? the thin edge of the wedge? You and your mob will be in power a shorter time than you think, and you and I know the other bastards are, for all your hideous latter day faults, invariably much worse. And who will stop the silvertail sharks then if you have kneecapped our community’s political power?

8 Replies to “It’s a busted trike, not a Ferrari, Mr. Beattie”