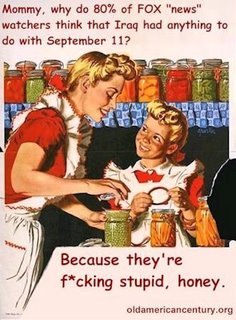 Today in the latest Newsweek polls, Doodoo Dubya has managed only 26% – the slimy ratbag is now down to Nixon crim levels.

To celebrate, we introduce you to feisty Texan political blogger Chilled Beer, who is holding a competition for a Super Troopers DVD … see here for more details.

NB The woeful Doodoo polling has been overshadowed by a Gallup poll touted by the major vulture media purporting to show that only 14% of US folks have faith in Congress. And why would they have faith in a numbers-nobbled Congress which has been unable or unwilling to prevent their treasonous, lying Prez from careening on his villainous, idiotic way.

Meanwhile, Hillary is leading the polls as contendaress in the 2008 election. Consider Larry Sabato’s poignant questions thrusting at the inbred elitism of seppo politics:

How is it that the country is on the verge of filling its highest office for the sixth consecutive term from one of two families? That every President from 1989 to 2017 may be a Bush or a Clinton is a national disgrace. What has happened to the American Republic? How does it differ from a banana republic–where a couple of dominant families often run everything for generations? Have we driven the vast majority of the potentially best Presidents out of the contest because of the high personal and professional costs of running for office? Are we the voters responsible because we are too lazy to go beyond the simplistic attractions of familiarity and high name identification? Or, most disturbing of all, has our political system become ossified, so that we are too fearful of change to seek out the most outstanding leaders among us for the toughest job in the world?

We don’t pretend to have the answers. But we are shocked and dismayed that more people aren’t even bothering to ask the questions.

We are cynical and doubt sufficient US serfs will wake up prior to the elections to the devious dynastical con being perpetrated on them by their feudal lords and lordesses. Furthermore, those who consider themselves imperial citizens naturally require and feel comfortable with imperial rulers.