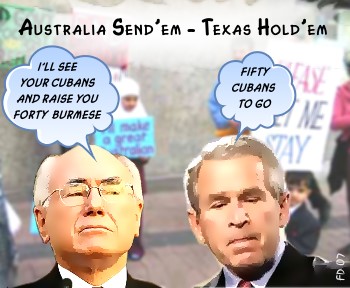 The ties and lies that bind between Asstralia and the United Stupids have been strengthened again with the launch of a brand new rodential caper – people trafficking.

Harnessing the blood-curdling imagination of Andrew Metcalfe, Immigration Department Secretary, the odiferous rodent has driven a hard bargain with accomplice Doodoo. Whorestralia will rid itself of those embarrassing unwanted Sri Lankan and Burmese cue-jumping boaties holidaying at taxpayers’ expense in the lovely detention resort in Nauru, where the locals are sick and tired of their already plundered country being treated as a human rubbish dump, in exchange for the United Stupids’ excess human baggage – Cuban and Haitian refugees.

This sordid deal works out splendidly for both imperialistic scoundrels, as it plays well electorally to the paranoid barbarian hordes in both their beknighted kingdoms. For Whorestralian xenophobes, Cubans and Haitians would seem almost American, especially if they are a sacred gift from King Doodoo himself. And, hallelujah brother, they are not Asians and therefore probably not dreaded Muffy followers. In fact, if not voodoo adherents, they’re most likely Catholic.

Did anyone bother asking any of these desperate people where they would rather live before they were traded like stamps?

Whilst Asstralian refugee rejects may not mind ending their arduous voyage and imprisonment with a free ticket to the United Stupids, and existing illicit people smugglers rejoice at a chance of increased demand and profits, it is dubious whether Cubans and Haitians would wish to travel to the other side of the globe to settle, with minimal future contact with relatives and friends. This raises the possibility that Doodoo’s gangsters are anticipating a lovely rampage in Cuba after Castro’s death, resulting in many Cubans fleeing the country for the United Stupids. Is Whorestralia being lined up to be a convenient human dumping ground for the human consequences of future US excesses in their interminable, tyrannical pursuit of unfettered mercantilism, grotesquely disguised as usual as those lofty tenets, freedom and democracy?