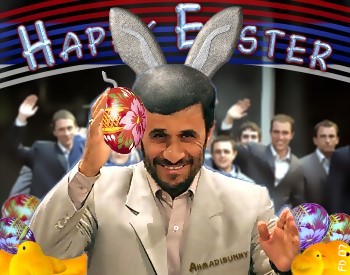 Even at Easter, following Ahmadinejad’s generous theatrical gesture releasing the Brit sailors, the United Stupids remain fixed in a characteristically un-Christian mind frame. They continue to refuse Iran access to their 5 officials abducted by the United Stupids.

“I think there’s no inclination right now to let them go,” Mr Gates said in Washington when asked about the fate of the five Iranians captured by US forces in Iraq and held since January.

“Iraqi government officials and US officials are discussing if there’s some way, perhaps, that there could be some kind of Iranian access to them,” he said. “But as far as I know, there’s no requirement for that.”

“I don’t think that consular access is being considered. I think the issue is whether there’s some other means by which some other access might be given,” he said.

Mr Gates’s comments appeared to fall short of a statement by US military spokesman Major General William Caldwell, who told reporters in Baghdad that a consular request to visit the five Iranians was “being assessed”.

The United Stupids’ hostage taking may blow up their faces, as Iraqi Foreign Minister Hoshyar Zebari has agreed with Tehran that

the men were operating with the knowledge of the Iraqi government and were not involved in any sort of “clandestine operation”.

“They were known by us. They were under surveillance by regional security. They operated with the approval of the regional government and with the knowledge of the Iraqi government.

“We were in the process of formalising that liaison office into a consulate. Then they would have diplomatic immunity,” he said.

As usual, Doodoo’s peculiar god must be telling him fibs.

Bush’s assertion that “I trust God speaks through me. Without that, I couldn’t do my job” brings to mind God as a dull-witted, cognitively-impaired nationalist unable to utter a simple declarative sentence who spends his time preaching “blessed are the warmongers and profit-makers.”

One Reply to “No Easter eggs for Ahmaddy”