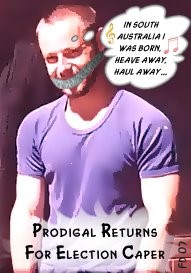 Playing along with the criminal United Stupids government in order to come home to Asstralia post haste, Hicks has acquiesced to a laughable token 9 month sentence in addition to time already served, with a total 7 year sentence, provided he shuts his mouth for a year and withdraws claims he was mistreated by the torturing septics.

This means he’ll be free at the end of December 07, after the next federal election. The rodent will be able to lie that he has supported a Asstralian citizen’s rights whilst protecting the infantile Whorestralian public from the Hicks menace.

Terry Hicks however pointed out that

his son was forced to undergo a plea-bargain and his case was never properly tested in court.

“Nobody will ever know what the evidence was.” 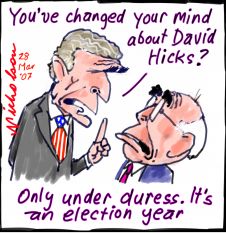 “However the minute Hicks arrives in Australia, our legitimate justice system kicks into action. It may hold some nasty shocks for the Howard government which has endorsed this illegal process at Guantanamo Bay.”

Hicks is bound by the “court” orders consequent to his plea bargain which have been strongly criticised by civil rights lawyers:

They were especially critical of the order forbidding Hicks from protesting any mistreatment, saying such a requirement would be unconstitutional in a civilian US court.

“If the United States were not ashamed of its conduct, it wouldn’t hide behind a gag order,” said Ben Wizner, staff lawyer for the American Civil Liberties Union.

“The agreement says he wasn’t mistreated. Why aren’t we allowed to judge for ourselves?” 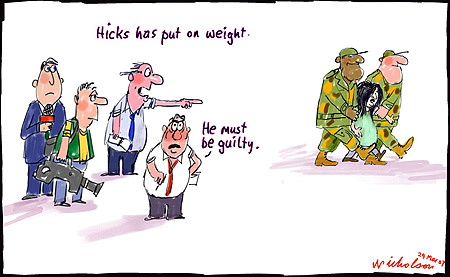 “The Americans made David sign a paper to say he was never abused… when we knew he has been – David told us.”

Mr Hicks said David would have to think about whether he would want to tell his story.

“Once David’s home he’ll have time to think about that,” he said.

“Who knows, he may want to change his mind.”

We can but hope so … we can be pretty certain the rodent will attempt to capitalise on a silenced Hicks’ misfortunes to boost his woeful electoral position.