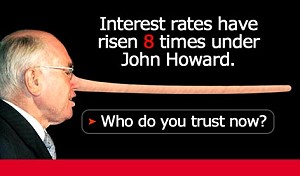 Adulators of our prime monster often pontificate about the proud, supposedly unequalled record of the object of their worship in keeping interest rates under control. Yet as it can easily be demonstrated, they are indulging in pompous magical thinking.

MICHAEL BRISSENDEN: In the same interview Ian Macfarlane tested that bold claim about record high interest rates, whose rates were higher John Howard in 1982 as Treasurer or Paul Keating in 1989?

IAN MACFARLANE, FORMER RESERVE BANK GOVERNOR: The bill rate was higher in ’82 and it was higher I have to say in ’85 than ’89.

John Howard promised in the 2004 election to â€œkeep interest rates at record lowsâ€, but they have risen three times since then, and seven consecutive times in all. He has betrayed the families who put him in office, and is completely out of touch with the pain his rate rises inflict on Middle Australia. Mr Howard is so out of touch, he urged the Reserve Bank to raise rates and told us it is the interest rate rise we have to have.

According to the OECD, only Turkey, Iceland, Mexico and New Zealand have higher interest rates than Australia.

Depending on the April 24 CPI figures, it is on the cards that there will be at least one more interest rate rise this year. Little Johnny will be praying he won’t have to explain away prior to this year’s crucial federal election the fifth interest rates hike since he promised at the last election to keep interest rates low.