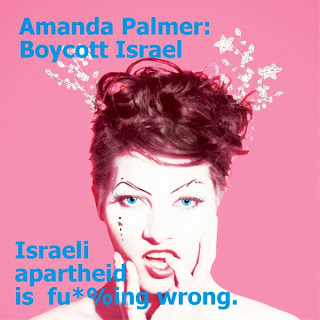 We appreciate your engagement with the cultural boycott in your statement on your blog [1], and would like to clarify to you that while your kickstarter house party does not fall within the ambit of the Palestinian-led boycott, because of its private nature and the absence of institutional backing, the gig at which you plan to play at the Barby would cross the boycott picket line.

To use a fact-finding tour with the Israeli organisation, Breaking the Silence “to see the areas they’re talking about”, as a kind of whitewashing of a contravention of the boycott is unacceptable.

We would hope you instead do make the effort, as did Jello Biafra [2], to view the results of Israel’s oppression of Palestinians, and then decide against breaching the boycott by playing at a public venue in Israel.

Would you have countenanced a tour of the apartheid South African bantustans with a white organisation and still played Sun City? We encourage you to listen to Palestinian voices who ask artists to respect the boycott and to realise that voices from the community of the Israeli oppressors do not represent Palestinians, and indeed often serve to silence and obscure the Palestinian message using deceptive words of ‘peace’ and ‘co-existence’. Palestinian people, in contrast, are asking you to co-resist with them in solidarity by respecting their boycott call.

As the PACBI (the Palestinian Campaign for the Academic and Cultural Boycott of Israel) has explained:

‘we simply ask that they do the sensible thing and stay away from Israel until they are knowledgeable enough about the “situation.” Artists are not being asked by one or two local individuals to boycott Israel, which could be dismissed as uninformed or unrepresentative of the common interest. In the Palestinian case, artists are being asked to respect the cultural boycott of Israel and its complicit institutions by a majority of Palestinian civil society, over 170 organizations from across the political and social spectrum, and especially by a great majority of Palestinian artists and cultural figures. If the Palestinian near-consensus is not sufficient to convince them, then they can at least refrain from performing, accepting prizes, or exhibiting art in Israel until they have visited the occupied Palestinian territory and spoken with exiled Palestinian refugees’.[3]

Some artists who played and then became aware of Israel’s oppression and the legitimacy of the boycott, like Macy Gray [4], Roger Waters [5] and Denise Jannah [6], later regretted their performances and would not have played had they known then what they later discovered.

Please refrain from playing at the Barby, please don’t breach the Palestinian-led boycott, divestment and sanctions call and do make the effort also to find out more for yourself about Israel’s occupation, settler colonialism and apartheid.

DPAI (Don’t Play Apartheid Israel)
We are a group, of over 1300 members, representing many nations around the globe, who believe that it is essential for musicians & other artists to heed the call of the PACBI, and join in the boycott of Israel. This is essential in order to work towards justice for the Palestinian people under occupation, and also in refugee camps and in the diaspora throughout the world.

Open Letter to Amanda Palmer: There is a profound ethical obligation to refuse to play in Israel http://refrainplayingisrael.blogspot.com.au/2013/09/open-letter-to-amanda-palmer-there-is.html